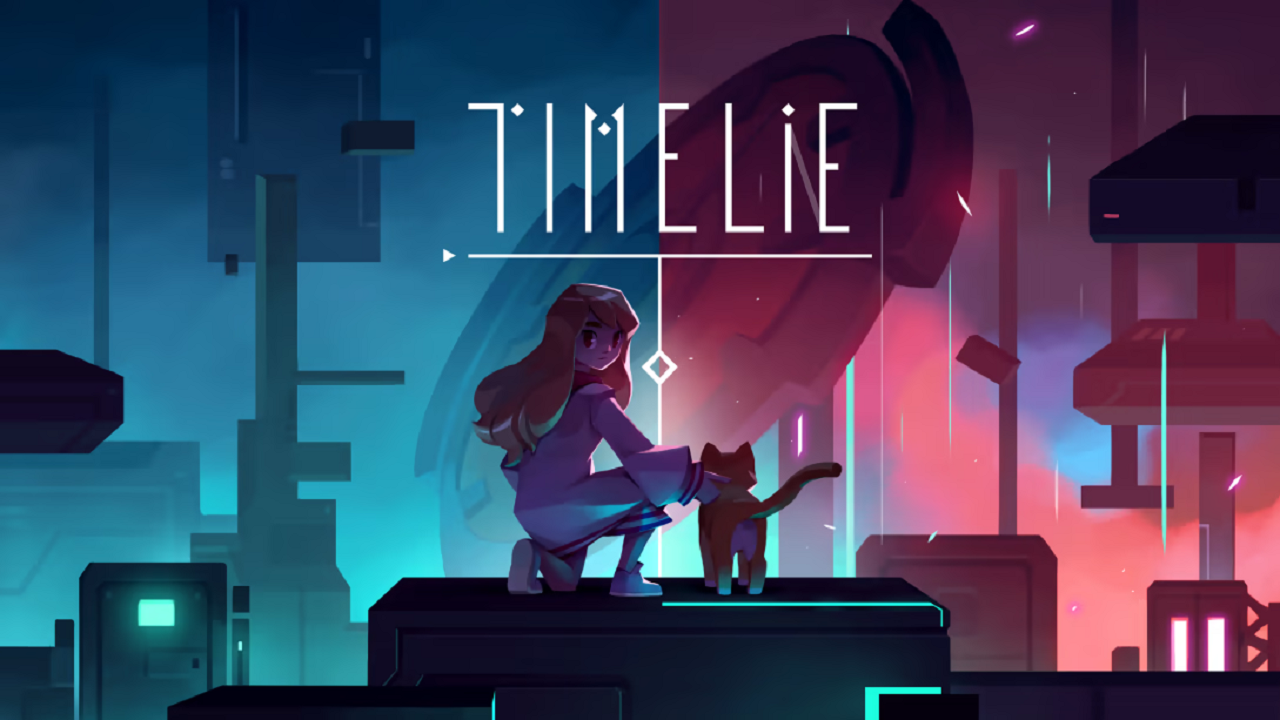 Developed by Urnique Studio and published by Zordix, Timelie is a stealth puzzle game in which you play as a little girl and her cat. Lost, as you must find your way out of an abstract world through a tiled layout, reminiscent of the GO games from Square Enix. Each stage is manned and patrolled by robots who will pursue and attack you on sight; this is where the stealth and puzzle elements come in. This sounds highly stressful; however, Timelie provides you with a unique mechanic making it one of the most accessible games of recent years.

With Timelie, your character can control and manipulate time, fast-forwarding and rewinding the world around you at will, as if you are scrolling back and forth through a video. This element has unlimited uses, but if you fast forward too far, you’ll reach the end of the playback, and therefore you won’t be able to act! This then requires careful planning; for example, you can fast-forward or play the entire sequence to read the robots’ movements and make a plan of action. You can then rewind all the way back to the start and begin your carefully planned course to the end goal. There were many moments where I figured out the correct path but timed it too late in the stage where I’d run out of time to reach the end target! This wasn’t frustrating at all; instead, it encouraged me to look deeper into the specific steps and actions I was taking, ensuring that the course ahead was as concise as possible.

You can use this function at any time throughout your campaign, using the L and R buttons — R to go forward, L to go back. Alongside moving time forwards and backwards, your character can also manipulate time and fix bridges, floors and areas that previously broke. This can only be done once you collect special shards that allow you to take this action. Another element to consider when mapping your perfectly timed route.

Just in case it hadn’t sunk in, you are a young girl in an abstract world, continuously being hunted down by robots. That’s a pretty frightening situation to be in alone… but wait, you aren’t alone. You have a cat, and this cat is vital to your survival. Timelie promotes a single-player, cooperative experience. What this means is when needed, you will control both the young girl and the cat on a single stage to complete the task at hand. The cat can help pass through hard-to-reach areas the young girl otherwise could not. This single-player cooperative is genuinely unique and is a feature that works perfectly.

The gameplay is easy to pick up and learn. The time control mechanic allows the player to perform at their own pace – a feature that I value highly. That said, one issue I came across was how precise your selection must be. Each tile has a dot that indicates the tile. You must hover the cursor over the dot and select it specifically; otherwise, your girl isn’t moving! This can be frustrating in moments where timing is critical, but then again, you can just rewind whenever.

Throughout my time with this game, I couldn’t help but fall in love with the entire aesthetic. For those that have played Monument Valley, it was akin to this in the art style, vibey soundtrack, and simplistic yet utterly gorgeous visuals. I couldn’t take my eyes off it, and as I progressed through the levels, I found myself hooked, lost in this world — almost as if I was in a trance.

No stage felt identical to the last. Sure, many mechanics were repeated; however, these were offered in unique ways, causing you to think less linear than you initially would have. For example, some stages would have no enemies but would instead present you with a timed puzzle where the stage itself was wasting away before your eyes. Then you would have other levels that would be enemy heavy — forcing you to be as stealthy as Solid Snake in his prime. The difficulty also varied massively. I’d find myself stuck on a particular stage for ages and then breeze through the next handful. I really liked this as it kept me engaged with those small victories followed by a well-earned challenge.

Timelie is a fantastic game that is close to faultless. Despite the strict preciseness needed for some actions, this is the perfect game to introduce several mechanics found in puzzle, stealth, and adventure games. The art style and soundtrack are sublime. It’s an incredibly satisfying and enjoyable game where you can lose hours without even realising as every aspect just pulls you in. I highly recommend everyone give this gem of a game a go and have a friend who doesn’t play games sit down with you and have them try this out — I guarantee you they’ll be drawn in. Oh, and you can make the cat meow. It’s adorable.

Timelie is a fantastic game that is close to faultless. Despite the strict preciseness needed for some actions, this is the perfect game to introduce several mechanics found in puzzle, stealth, and adventure games. The art style and soundtrack are sublime.