Before I begin, readers should know that Tokyo Mirage Sessions #FE is a game for a niche audience.  If you are against anime, J-Pop, or JRPG scene, then you may want to walk away now.  This game is made in Japan, for Japan, and takes place entirely almost entirely in Japan; meaning everyone in it speaks Japanese (even the American in your crew), so get ready for some subtitle reading.  That being said, Tokyo Mirage Sessions feels like the sort of JRPG experience that the Wii U has been missing for its entire life-cycle.

The main cast of TMS feels fleshed out.  Each character has their own goals of being a pop-idol or actor, and the game likes to put the spotlight on their careers.  Most of the cast is often preparing for a big audition or concert, while facing their shortcomings.  Meanwhile, the main character, Itsuki Aoi, plays a support role as he guides his friends throughout their trials, giving players an insight to their motivations.

The supernatural worlds that run alongside the real world, known as idolaspheres, are uniquely crafted to be chic and modern.  Navigating these idolaspheres require some light puzzle-solving, but nothing that seriously hinders the pacing of the game.  The only stumbling block TMS comes across is when these two major elements meet.  At times, I feel like I am playing two different games: one where I manage a group of performers, and another where I fight monsters.  Both elements never manage to blend smoothly, but are strong in their own respects. 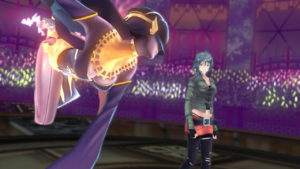 In the world of Tokyo Mirage Sessions #FE, humans with a taste for the creative (e.g. actors, singers, songwriters, directors) have an energy, performa, that is sought by otherworldly creatures known as mirages.  Some of these artists and musicians have teamed up with mirages to become mirage masters, and fight against those who would take performa from humans.  Itsuki and Tsubasa are then recruited into Fortuna Entertainment, a talent agency for singers and actors leading a double life as mirage masters.  That summary will be more or less your entire knowledge of the plot for most of the game.

The main story regarding mirages and what they are doing in our world moves at a snail’s pace for most of the game.  Narrative progress is more focused on watching the main cast of characters grow personally and professionally.  At the end of the day, I was far more interested in wondering if these characters could achieve their goal in show business than anything the mirages were up to.  Even the protagonists’ mirages get little screen time compared to their human counterparts, chiming in during a few key moments, before the focus turns back to the talent of Fortuna Entertainment.

The gameplay aspects of many of the side-quests involving the idolasphere can feel the same, almost always culminating into “kill X amount of Y to progress”.  Even the major side-stories are guilty of using these idolasphere hunts to pad out the action.  There are side-stories that involve fighting boss-type mirages, which come across much stronger than the standard hunting.  Focusing in on one or two fights allowed characters to interact more, and give an urgency which many of the other side-stories were lacking.  With a game that is so focused on characters, even a little more interaction could have gone a long way.  Each of their side-stories concludes with whatever performance they were practicing for, emphasizing a more personal satisfaction rather than gaining experience as the reward for completing these stories.  Singers will usually get an animated cut-scene for their concerts or music videos, but the acting gigs do not get the same treatment. 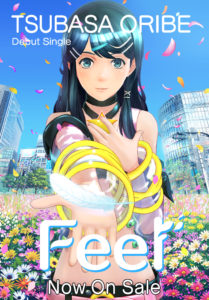 For whatever flack I give the plot, I sure can’t say anything negative about the game’s visual design and artistic direction.  Since the game is focused around performers, many of the game’s elements revolve around the same theme.  Battles take place on a stage surrounded by a cheering audience.  Special attacks and abilities are based on performances the characters had in their career.  For example, after Touma lands a job playing the villain in a children’s action show, he gains the chance to attack by charging the entire enemy team in a bull costume.  The other half of TMS’s art direction is modern day Japan, which shows both visually and via gameplay.  Like many youngsters do in this 21st century, texting is the dominant form of communication in TMS (called Topic in their world).  Topics serve to push the main and side stories, but characters will sometimes text Itsuki random happenings in their day, making them feel more fleshed out.  Topics also appear on the GamePad, so aside from major plot points, the game won’t pause the experience until the player marks the texts as “read”.

The battle system may not be ground-breaking, but it is aesthetically unique, and I can appreciate the visual flare of watching the characters’ special attacks (performances).  Knowing characters’ strengths and weakness play a huge part in keeping yourself alive.  Hitting enemies with an attack they are weak against will not only deal more damage, but can trigger sessions, or chain attacks between all of your cast members.  However, what goes around, comes around, and enemies have the exact same opportunities to create sessions to tear your fighters apart.  Fights can change on a dime, which keeps skirmishes interesting from start to finish. 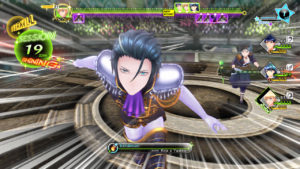 Since strengths and weaknesses are so significant, every character gets a chance to shine throughout the entire game.  Cast members are also able to shuffle in and out in the middle of a battle, so players can easily keep everyone leveled properly and hold onto the advantage throughout the fight.  On the other hand, Itsuki must always be in the main cast, which sometimes becomes your unavoidable Achilles’ Heel.  Even losing one cast member can put you at a severe disadvantage, and I’ve fallen to more than a few fights because Itsuki was forced to go up against less-than-ideal opponents.

Encounters are controlled through fending off charging enemies, keeping the pacing in the players hand.  In most cases, Itsuki can bat away charging mirages with his sword and run past them.  Sometimes a stronger enemy (savage enemy) can appear, sporting a party of enemies at least a few levels higher than yours.  Itsuki cannot fend them off like most enemies, and any of these encounters can give the gang a run for their money.  In a savage enemy encounter, one wrong move, and your team is wiped out. 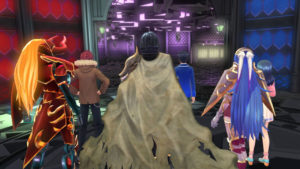 Tokyo Mirage Sessions has many points in its favor.  Battling is constantly a challenge, and remains visually interesting from start to finish.  The main cast is fun to listen to, and their stories do well to help players empathize their plights.  There are a few minor gripes about the game that can be brushed aside, but its largest issue is the failure to meld moments between the idolasphere/mirages and the real world.  Both major elements are great in their own right, but they can’t seem get along.  Otherwise, Tokyo Mirage Sessions is a refreshing title in the world of JRPGs, and in the gaming world in general.  I may not be a fan of J-Pop, but those that are should definitely check out this title.