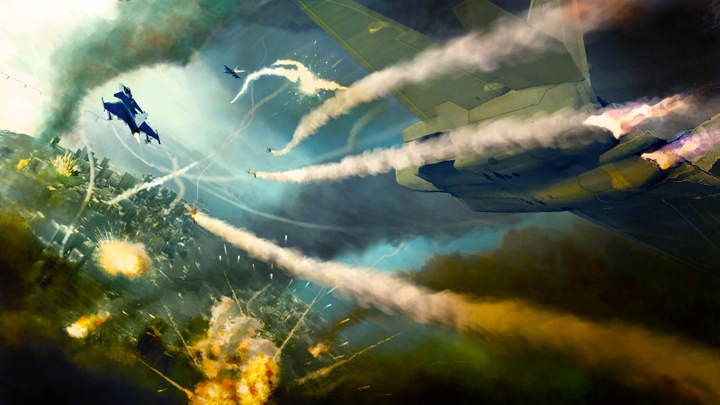 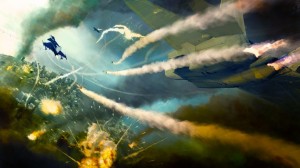 Tom Clancy’s HAWX series is back for round two. This time you’ll control newer planes and have newer weaponry and aircraft at your disposal. Fly classic aircraft such as the SR-71 Blackbird, F-16 Falcon, or the F-14 Tomcat. You can even fly UAVs and helicopters in various missions throughout the game.

One thing you’ll notice right off the bat is the ability to use the Wiimote/nunchuk’s motion controls for flight. This is very similar to Sky Crawlers where you can use the nuchuk for movement and the Wii remote for aiming and shooting. You can also opt to simply use the buttons and analog stick on the nunchuk for movement. I preferred to use motion controls as I do with most Wii games simply to try them out. The controls work very well but the gameplay is more arcade like than realistic aerial combat. Don’t pick up this game thinking you’ll have to master precision to shoot enemy aircraft down. In most cases you simply point at an enemy to lock on and press ‘A’ to fire a missile and they’re gone. Other missions have you attacking enemy ships in a harbor and high-altitude bombing runs. 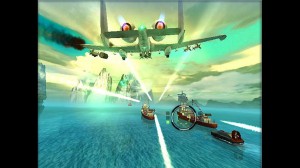 The game runs at a smooth framerate and it’s no wonder since there isn’t a whole lot of graphical detail. The aircraft are really the most detailed renderings in the game and have some nice reflections, but overall the environments are very basic and bland.

Multiplayer in HAWX 2 allows 4 players to take part in some arcade shoot-em-up gameplay but the majority of the fun comes through the game’s co-op mode. This allows a second player to help shoot aircraft down white player one is going through the story missions. Other options to increase replayability are challenge modes and even a retro top-down scrolling shooter a la 1942 for the NES.

If you’re looking for a fun, in-depth flying game to sink your teeth into for the Wii, you should probably look elsewhere. The dismal graphics and very simplistic gameplay make this game lose its wings pretty fast.