By Kaelyn Daugherty  •  5 months ago

Toodee and Topdee is a co-op 2D platformer AND top-down puzzle hybrid (hence the name). You will be switching between these two characters and utilizing their skills (and different perspectives) to solve puzzles; and save the universe of course. The story here isn’t too enthralling, but the characters are likeable and the gameplay is fun. The concept might sound a bit confusing, but it’s actually one of the best puzzle games I’ve played in a long time. The idea was spawned after the developers (two brothers, Gonen and Ori) had to create a game for a Game Jam event. The theme was “Combine two incompatible genres”, and thus, Toodee and Topdee was born.

Switching between characters is as easy as the push of a button. Toodee has the ability to jump, while Topdee has the ability to lift and move objects. Since Topdee is from the top-down dimension you will see things from an above perspective while controlling him, just like the first Legend of Zelda game. When you switch over to Toodee, you will notice you can only move side to side and jump, like a Mario game. It’s pretty neat, and the switching between characters works much better than I thought it would. 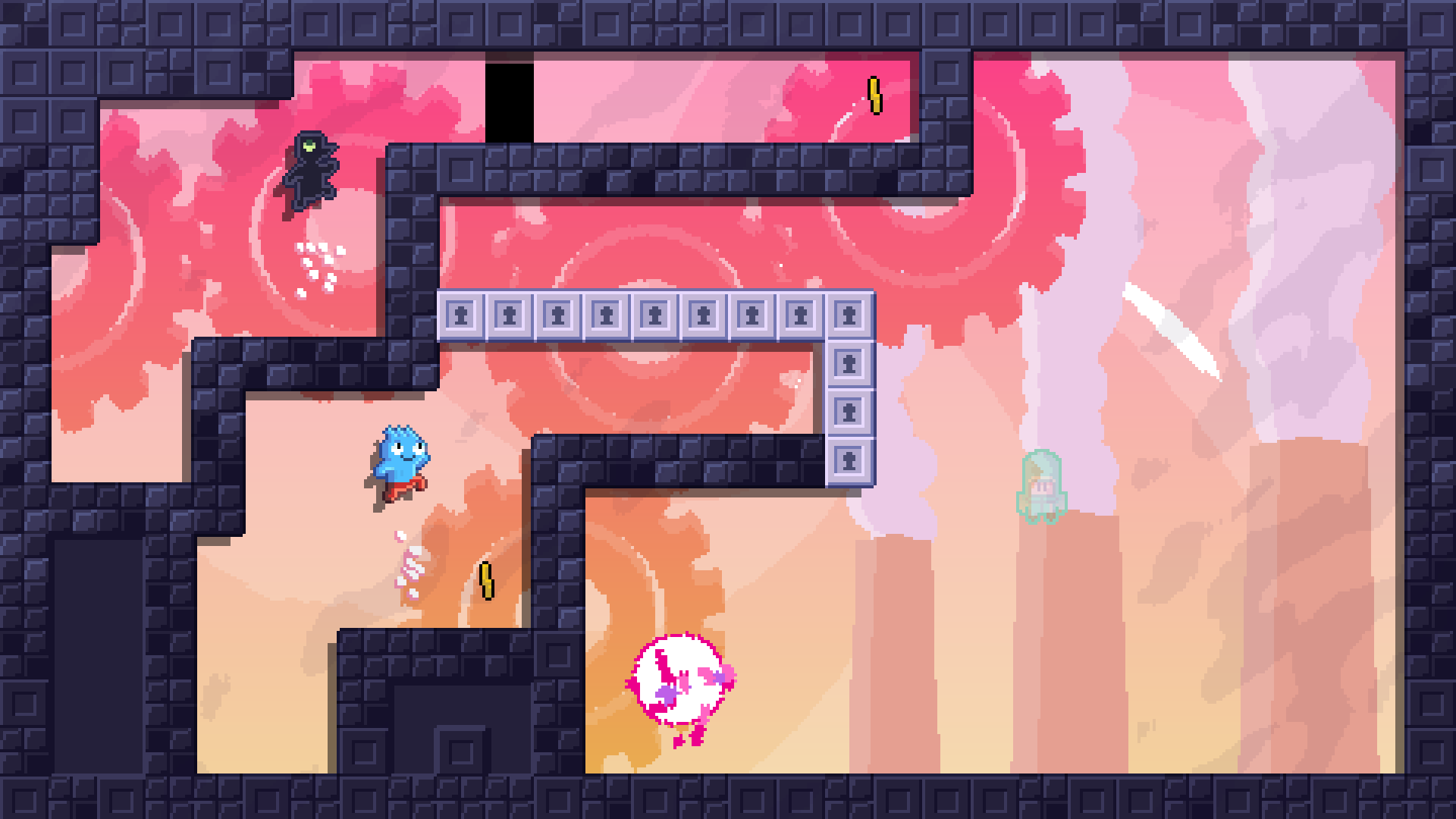 Let’s say Toodee wanted to jump to the other side of a level but he needed a middle platform because the gap is too big. Switch over to Topdee (Toodee will freeze wherever he is), grab a box and place it where you need the platform, switch back over to Toodee and voila! You now have a way to make it across the level. I highly recommend checking out the above trailer, because it’s a bit confusing to explain. Getting both characters to the goal is your mission, and sometimes the way is not so obvious. 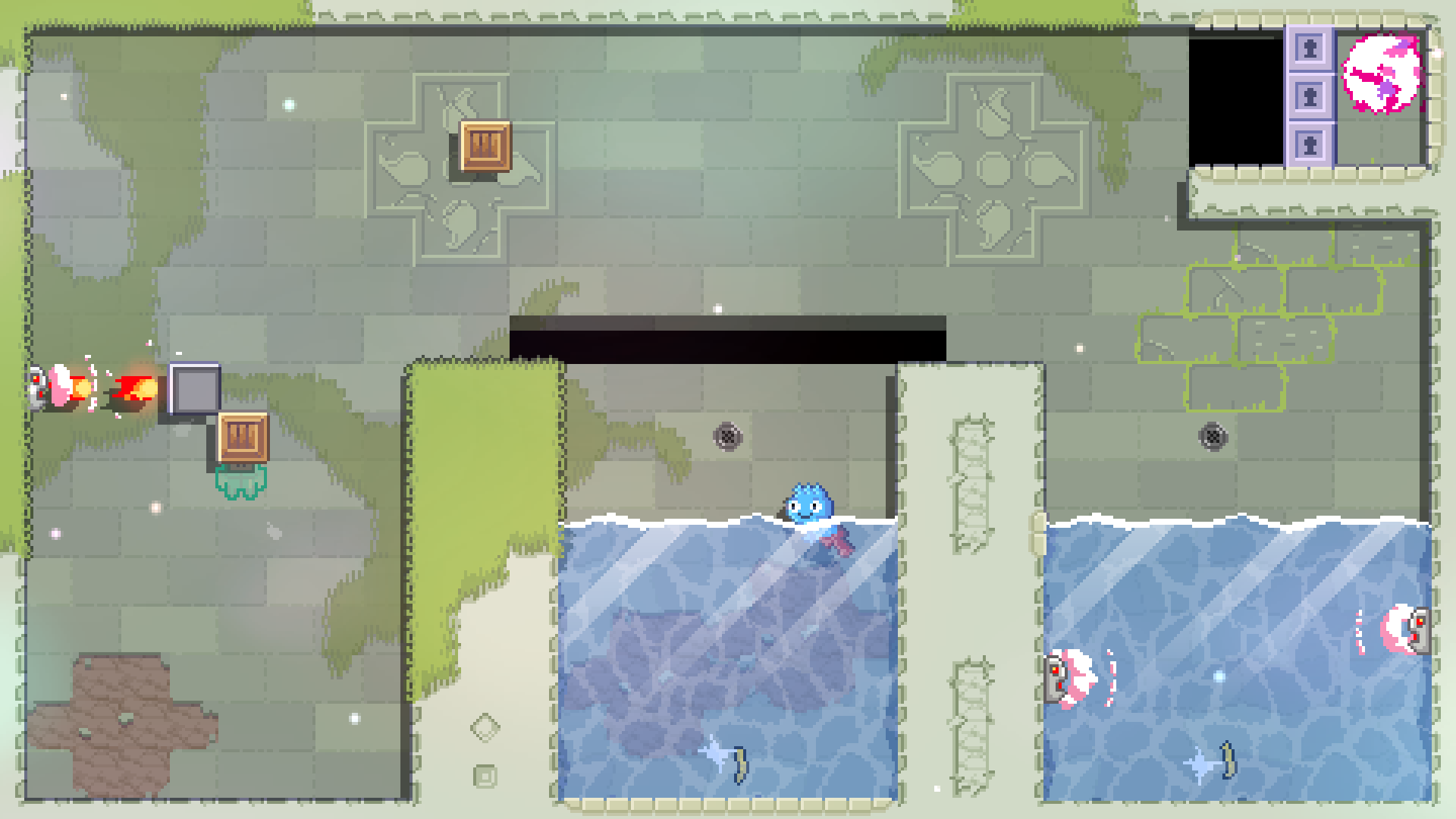 While the design and graphics are simple, the puzzles themselves are fun and tricky. I always got that “rewarding feeling” when I finally figured one out. They start off simple enough, (almost too simple) but the difficulty ramps up when you reach the second area of the game. You have to really think about where to start and the whole process of what you need to do, while avoiding enemies as well. 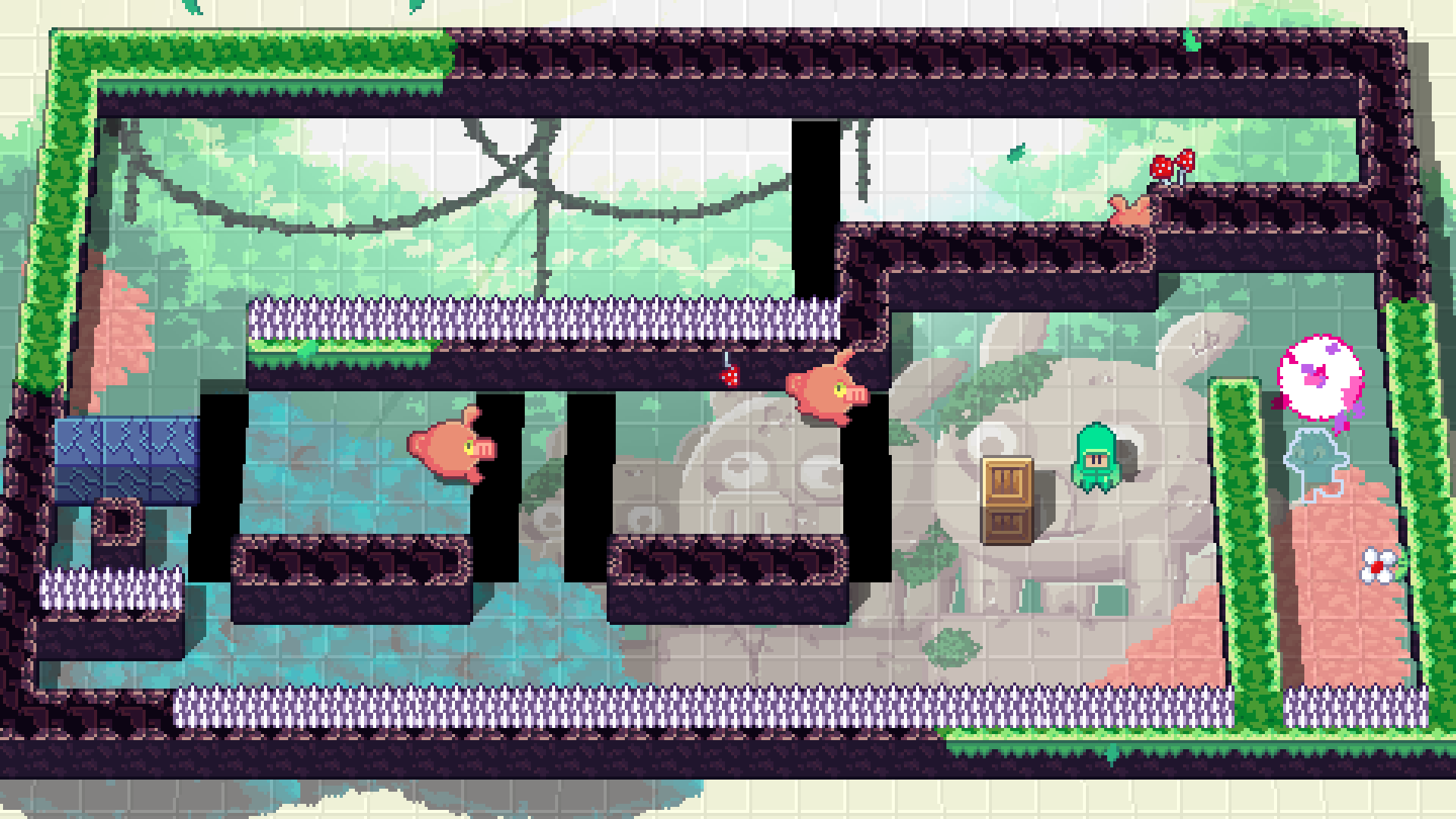 But don’t worry, if things get too bad you can always change the difficulty by going to the settings in the start menu and customizing how you want to play. You can give Toodee the ability to double jump, change the amount of hits you can take and a few more things. The settings are very flexible, so if you wanted you could breeze through the game in no time. But where’s the fun in that? 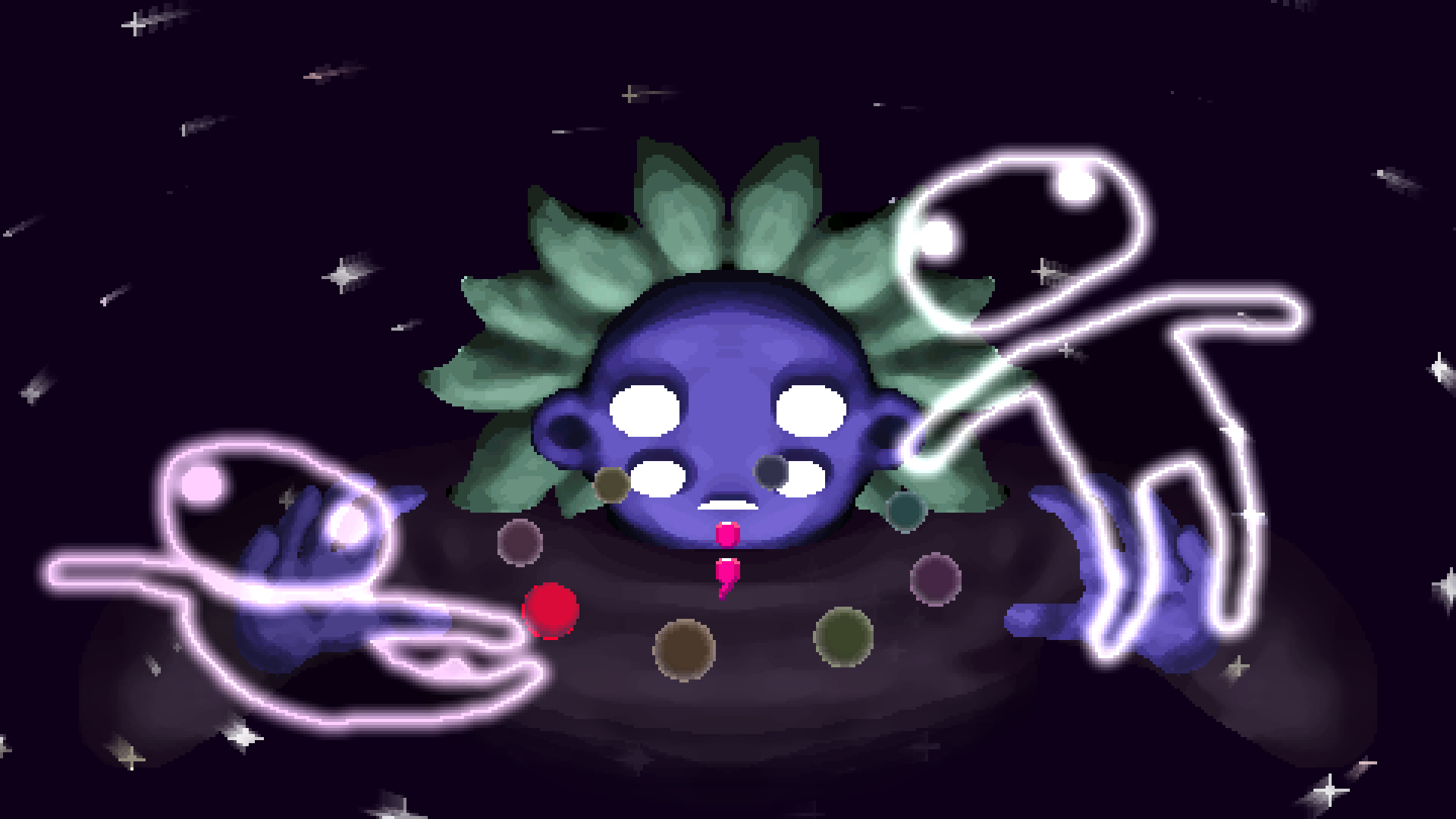 One of the best parts of progressing to the next chapter is beating the boss. These are unique battles because you have to use your puzzle-solving skills to navigate the area and also find a way to damage the boss with whatever you have laying around. Some of these guys are pretty crazy, it will definitely take you a minute to figure out what you need to do to defeat them. I would say reaching the end of a chapter and defeating the bosses was one of the most interesting parts of this game. 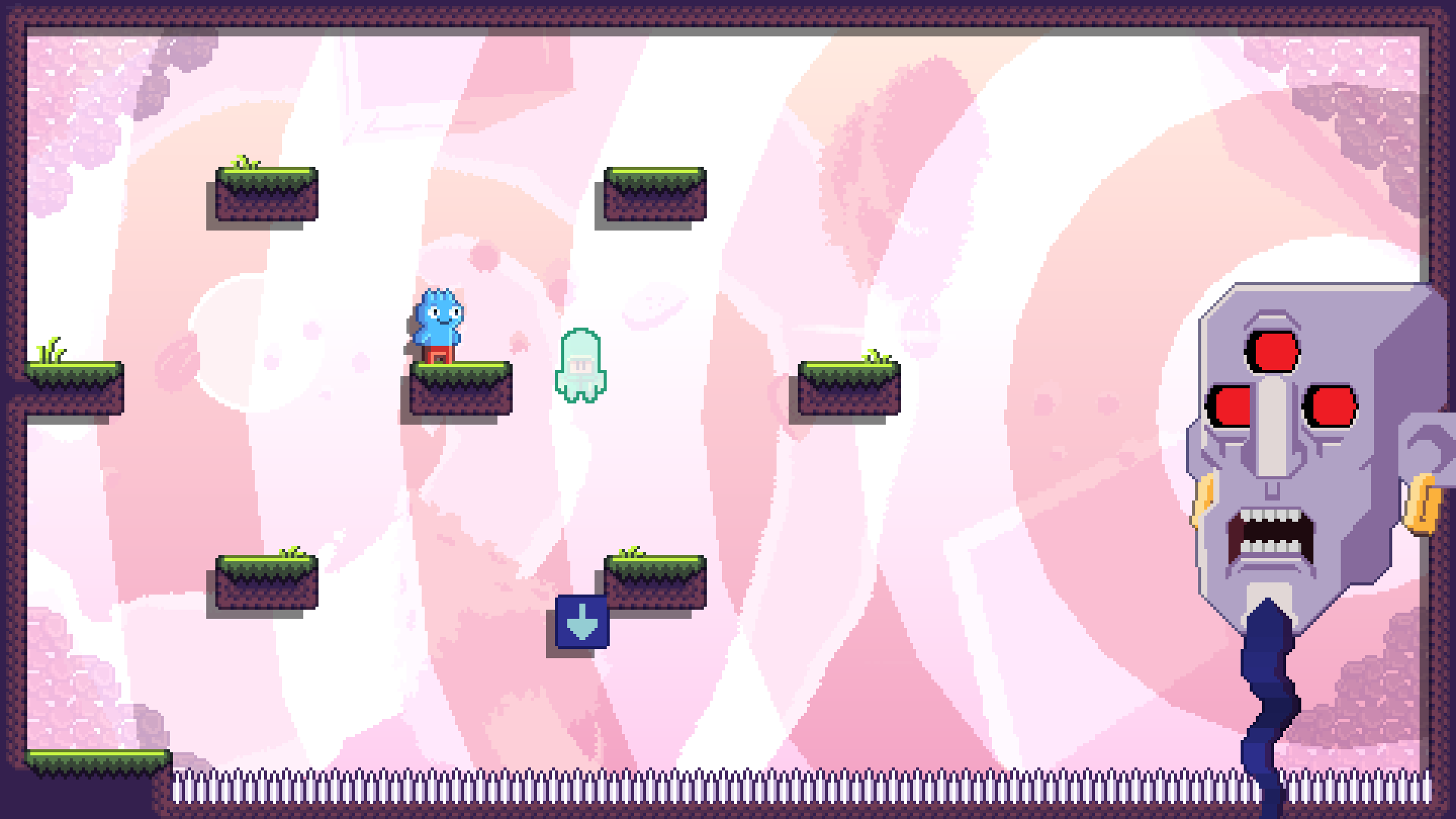 Toodee and Topdee can also be a fun two-player co-op game. One player controls TooDee and the other controls TopDee. However I feel this makes the game more challenging because you really have to rely on the other player to trigger things at the right time. It could definitely make for some funny (or frustrating XD) moments with friends. The whole game can probably be completed within about eight hours, unless you plan on finding all of the secrets. Toodee and Topdee’s adventure spans over six chapters, each with its own theme and environment. I didn’t once get a feeling of repetitiveness or stale gameplay, as things are always changing. 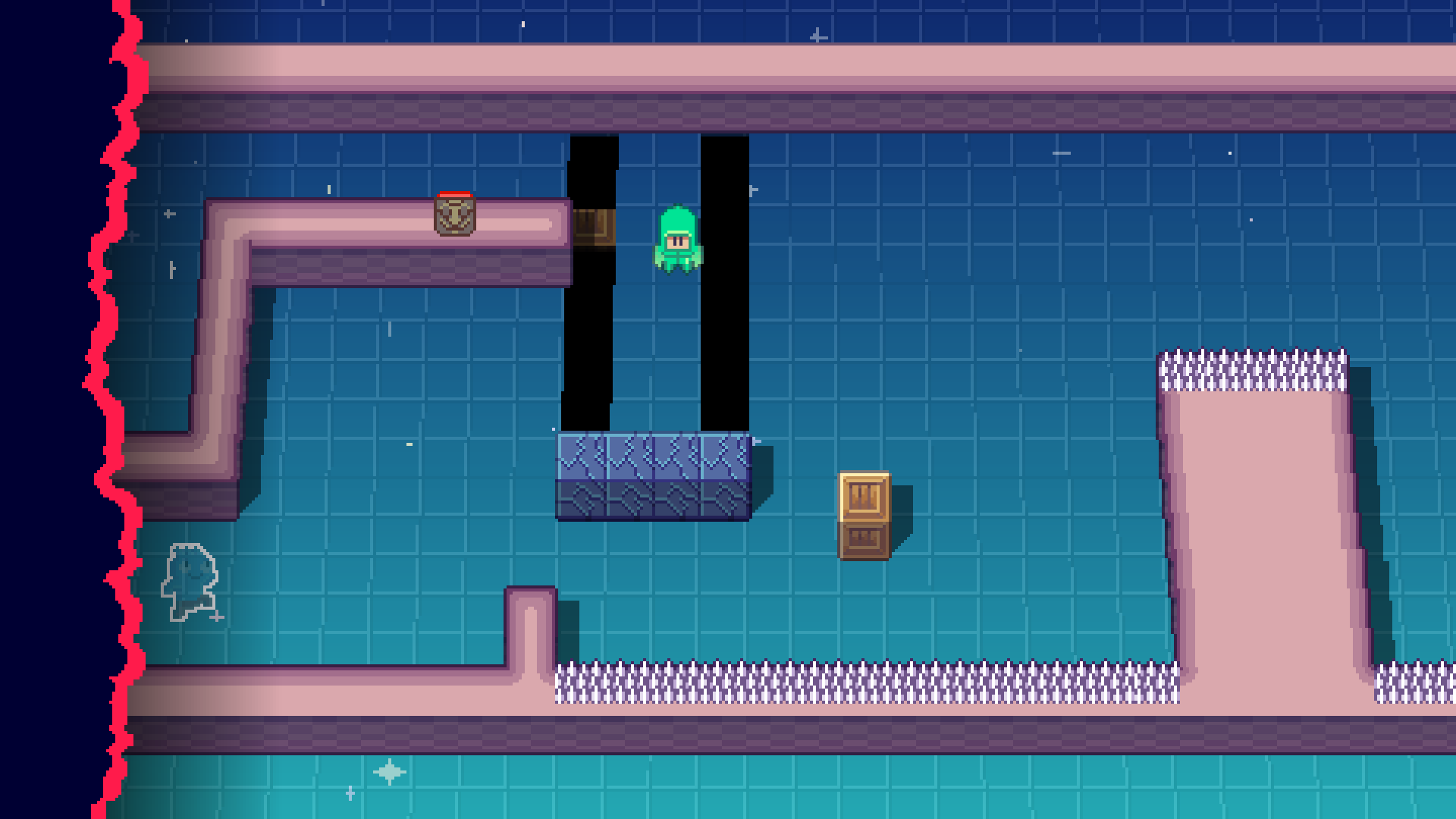 Overall I really enjoyed my time with Toodee and Topdee. While this isn’t the most groundbreaking or beautiful game, it has the charm, challenge and originality to keep you coming back for more. Toodee and Topdee is available now on Nintendo Switch. I definitely recommend checking this one out, especially if you’re a fan of puzzle games.

Toodee and Topdee is a fun, challenging game with an original concept. Change your perspective from 2D, to Top-Down with the press of a button, solve puzzles and defeat awesome bosses. Highly recommended for the player that loves puzzle games.