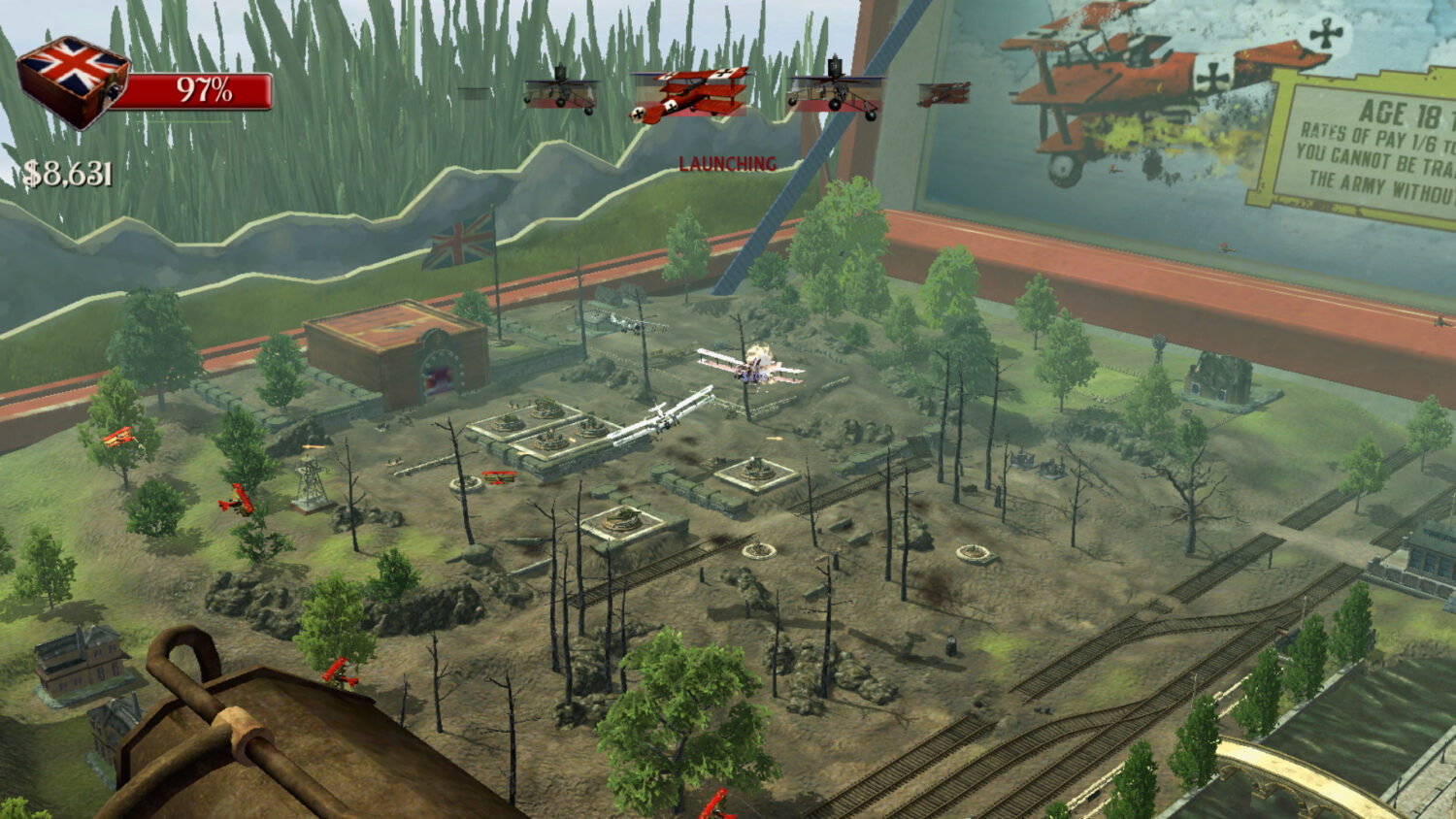 "Won't you come out and play with me?"

It’s time to pull out your army men and your Switch, and play Toy Soldiers HD. While this game has been out on Steam since April 2012, the fully functional overhaul has been released for the Switch after numerous delays. The last bit the developers made ready was the multi-player function, so now we’re ready to play either by ourselves or online.

I have not played Toy Soldiers on any other platform, so I was not familiar with the title. I thought it might be like playing with the plastic, little, green army guys on a game board, but I was wrong on that one. This is really a tower defense game with some extras. 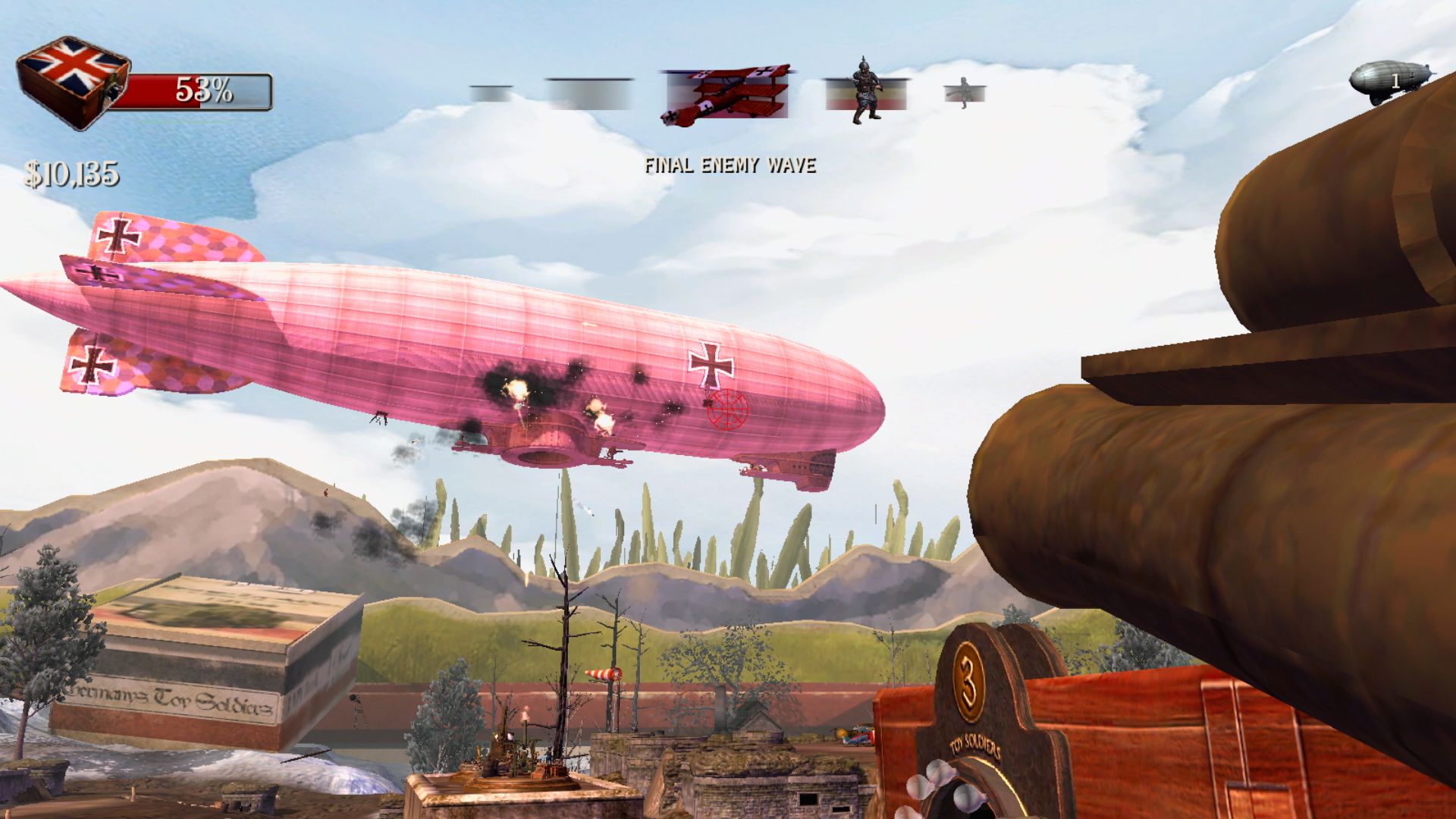 A neat twist to Toy Soldiers HD is that you start with plenty of infantry, but they seem intent on charging the enemy line, never to be seen again (all too accurate, there). What you have left are machine gun and mortar placements to make sure your side survives multiple waves of enemy infantry, cavalry, armor, and so-on. After several waves, you even get to take on a boss.

At the start of each level, you get an overview of the battlefield. This will show you the paths the enemy units will follow and your weapon placement points. You have a budget to start and a little time to get ready before the first enemy wave comes your way. The game will let you know what sort of foe you are about to face and even sounds a bugle call when they start their attack run. If you are ready for the next wave before they are scheduled to launch, you can give them the go ahead and they will charge early; this will get you some bonus points. 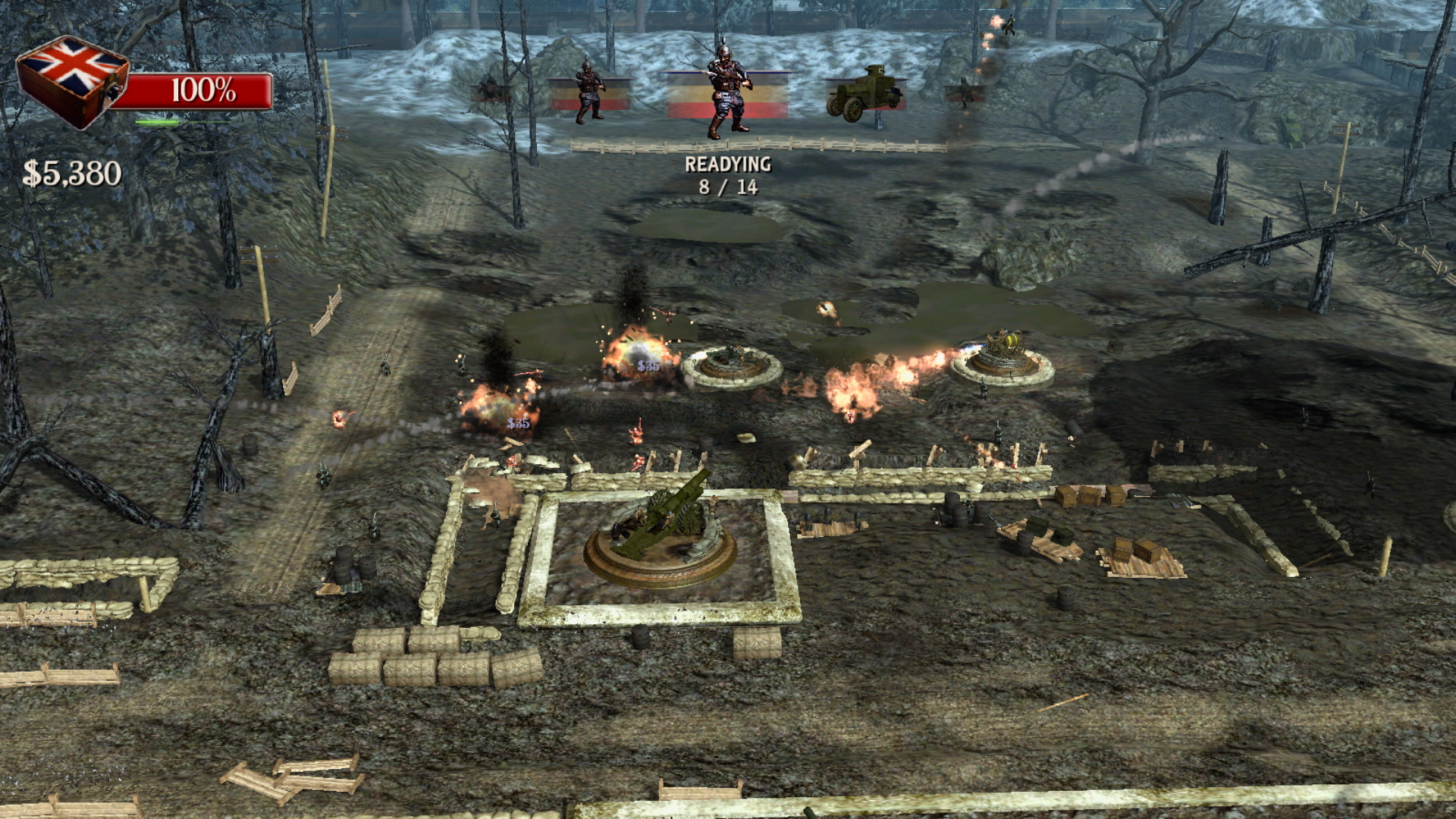 It costs resources to place a piece of artillery, and more to have it upgraded. You get to start with the venerable Vickers and a mortar, and things only get more interesting. There are some neat features to be discovered in the game, including your standard bearer (the guy with your side’s flag) which grants your side a boost, and a sniper tower where you can zoom in and take that one critical shot. Another feature I like is that you can take control of a single weapon and handle the aim and fire function yourself instead of waiting for the game to take care of an enemy unit.

As you advance to the higher levels, there are new weapons you can unlock. Keep an eye on your resources, as you may need to hold onto some coin to get the next new toy (pun intended). There are weapons like mustard gas, flame throwers, and so-on, so collect your coins and get ready to experiment. One bit of mixed reality and fiction in the game, which is both interesting and useful, is that your mortar fire can knock down trees. It’s sad to see a perfectly healthy larch take a lurch and fall over, but you can now better target the enemy. The fiction here is that once the tree hits the ground, it sinks into the earth and disappears.

In single player mode, Toy Soldiers HD is a very good tower defense game with new levels and layouts, new weapons and weapon types to use, some hefty bosses, and good replayability; you can work on winning levels faster to earn more points. Even if you’ve played it before, there’s new content here—including some “experimental” levels—to keep things entertaining. 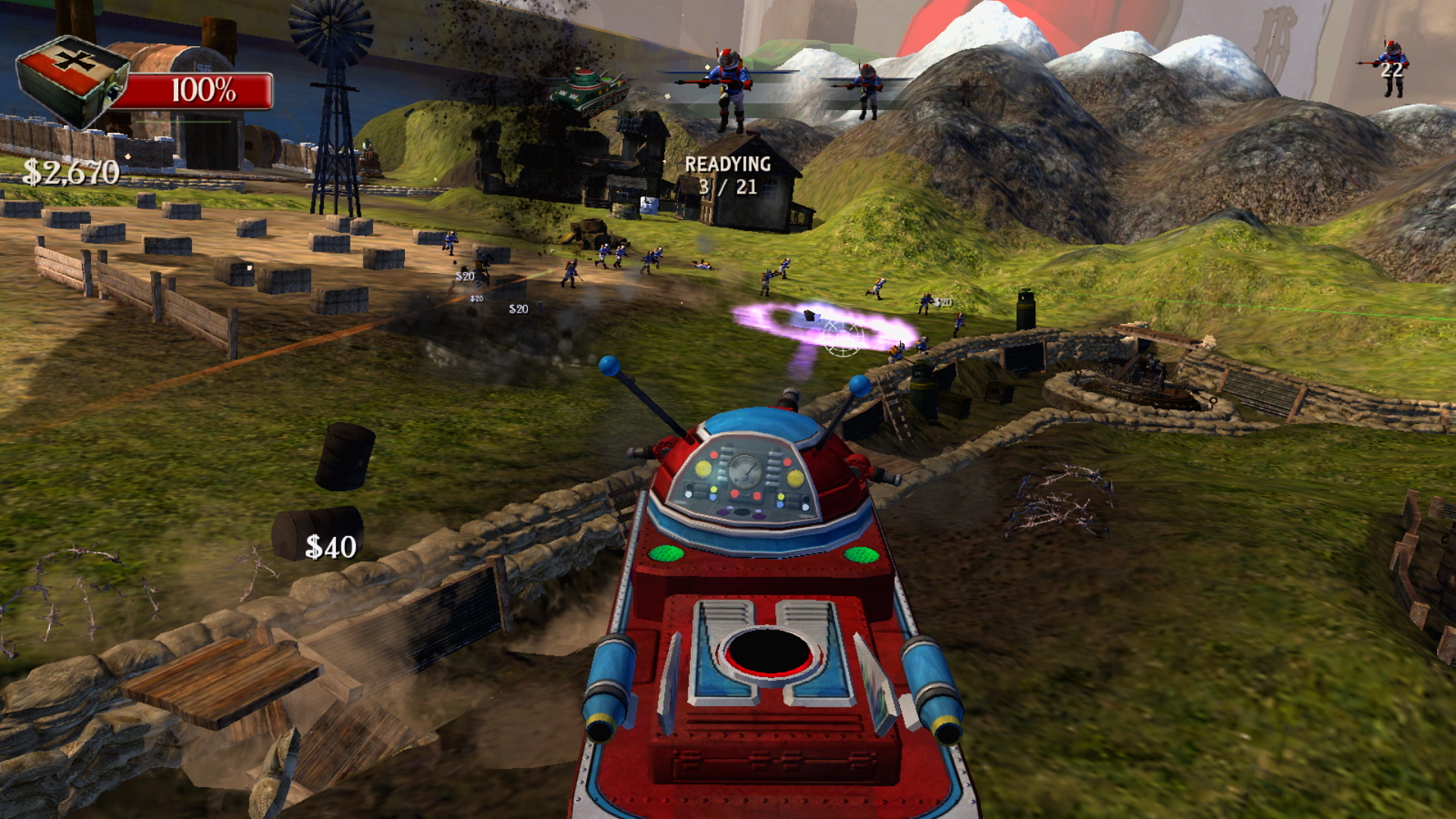 Online play is a new level of fun and frustration for this game. Don’t fret, the frustration I experienced was minor but it was three-fold. First, connecting for private online play is a bit cumbersome, and it took us a while to figure out. Note that there is an option for local multiplayer, but it’s split screen. Second, I lost badly to fellow Pure Nintendo staffer, Kirk Hiner, which is its own little ignominy. The third was jumping into a session where you have to figure things out as you go, which leads to terrible, horrible consequences…like losing to Kirk (oh, the pain).

Truth be told, the online session was actually loads of fun, and we learned a few things. For example, you have to launch your own offensive waves, and it costs game currency to do this. You have to balance this with the cost of setting up your defensive positions. One of the upsides is that it is England vs. Germany, so you get to use some new weapons, including a bomber. Be careful with your combat resources, some of them are a “one and done” deal.

Toy Soldiers HD has an interesting look that juxtaposes near realism with the imagery of a child’s playroom/toy box. It is colorful and clear looking without trying too hard to be either photo-real or cartoonishly silly. 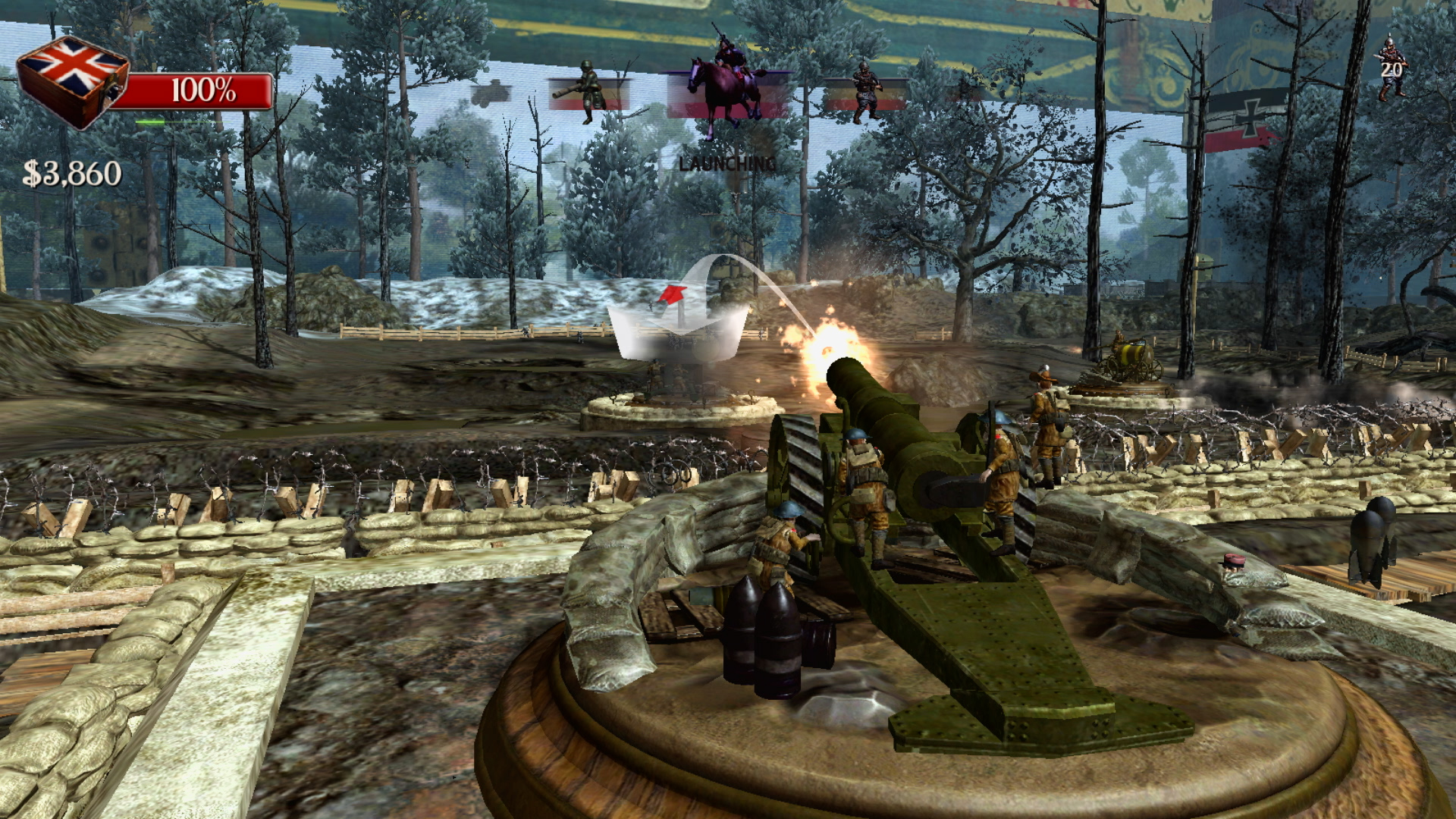 There is a certain sense of nostalgia, but it is very limited; there isn’t anyone still around who can actually remember WW I, but we can still appreciate the whimsy of the setting as a counterpoint to the terrible situation of The Great War. The controls are not quite as fast as a keyboard and mouse when setting up your towers, but everything works rather well.

Now I have to go practice with that bomber. I’m coming for you, Kirk.

Considering the visuals, gameplay, replayability, and online options, Toy Soldiers HD is very well done and fun to play. Figuring out how to best use your units is almost as much fun as enacting a campaign in your childhood sandbox.