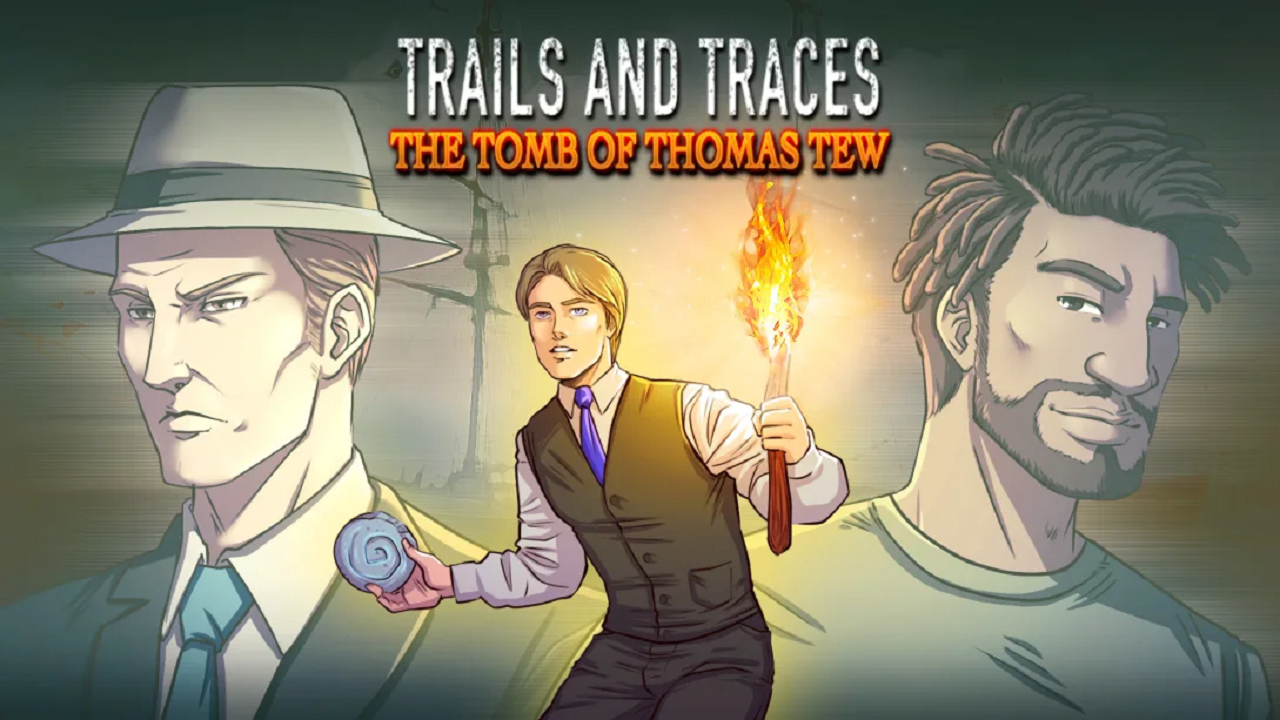 Don’t let the long name fool you; Trails and Traces: The Tomb of Thomas Tew is a short game. I beat it in about two hours and could probably trim half that time on replay. But what’s here is enjoyable and mostly faithful to the “classic” point-and-click vibe it’s aiming for. If only the ending wasn’t so weak; but I’ll briefly discuss that (spoiler-free) later in the review.

I should mention early in this review that the control scheme is the only area where this game differentiates from the classics – and not in ideal ways. Despite being my favorite genre, I stumbled through the opening minutes, attempting to figure out how to use my inventory. Having to hold a button to scroll between choices in a tiny window seems silly, especially when other buttons on the Joy-Con go to total waste. I encourage the dev to aim for something more optimized and intuitive next time. At least touch controls work in handheld mode.

Having said all this, the adventure succeeded in making me want to continue. You play as a detective, hired on a missing person case that soon leads to buccaneer capers involving the notorious Rhode Island pirate Thomas Tew. Some games in this genre can struggle with pacing, but The Tomb of Thomas Tew has enough new characters and locales introduced so that boredom never sets in. That’s no small task, believe me.

Speaking of characters, this game is fully voice acted. Granted, the quality is inconsistent. When a voice actor’s credits reach double digits in the same game, you can expect this; it’s not easy being a solo developer. But the quality is less critical than the quantity in this instance. Voices add a ton to the game without adding to the budget price.

While perhaps not memorable, the characters have enough personality to stand out, with subtle humor and such. I especially appreciate the touch towards realism. For instance, I anticipated that I’d need a tool for a future puzzle, but the NPC wouldn’t supply it until I had a “good reason to borrow” it. I like that a lot.

The puzzles are good, satisfying to genre vets, but tricky to newer players. I ran into a bit of a pixel hunt, looking for a small piece of cloth later in the game. But if you examine everything and exhaust all conversation options, you’re bound to find solutions that make sense in the context of the game.

My big letdown, other than a clunky control scheme, was how bad the ending was. I was intrigued about where the game was going, only to discover it stumbled into the worst of clichés. The ending’s writing was not solid, but thankfully the majority of the game is.

Trails and Traces: The Tomb of Thomas Tew has room for improvement, but I appreciate the game for its humorous characters, diverse locales, and well-done puzzles. Finding a fully voiced graphic adventure for just $4.99 is something to value as well. Now bring on a sequel with better control options and a less cliched finale.

Trails and Traces: The Tomb of Thomas Tew has room for improvement, but I appreciate the game for its humorous characters, diverse locales, and well-done puzzles. Finding a fully voiced graphic adventure for just $4.99 is something to value as well. Now bring on a sequel with better control options and a less cliched finale.