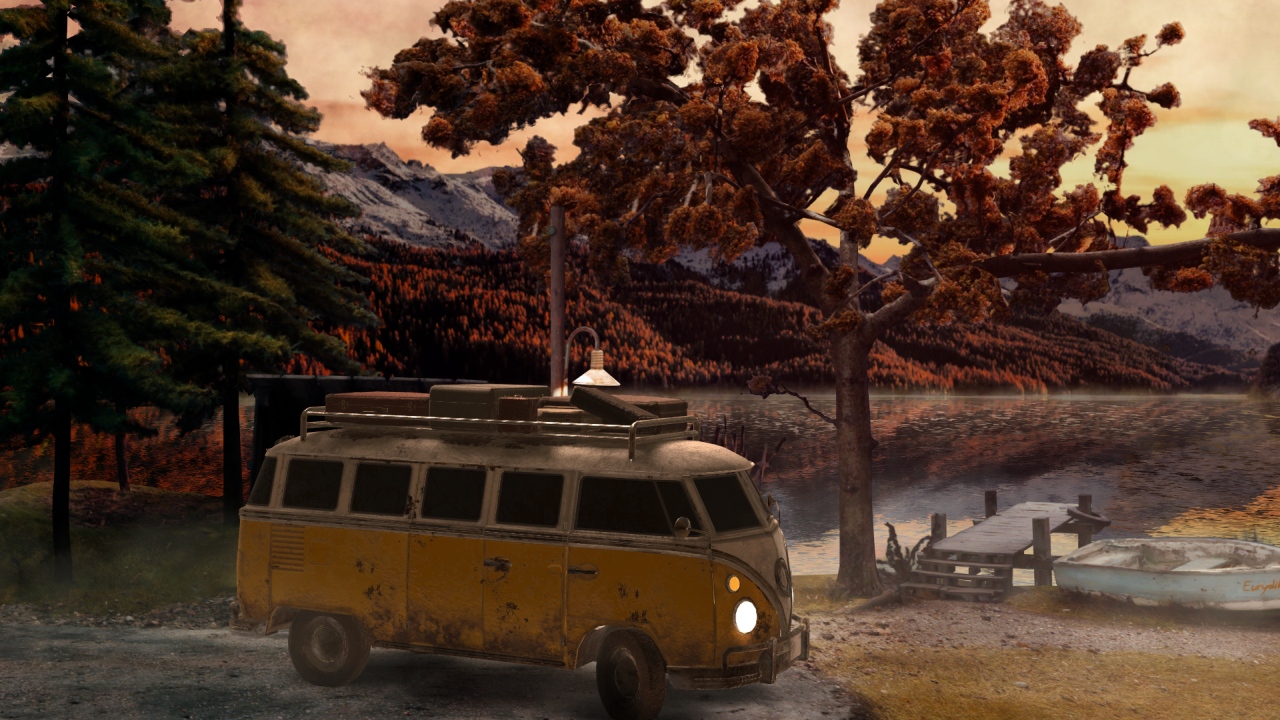 Trüberbrook is a Kickstarter success, a point-and-click graphic adventure game that takes place in Germany, 1967. The setting makes for some fun aesthetic touches. Listening to music from an early model jukebox, watching your “hippie” van drive up a winding, wooden-bridged mountain road, a puzzle where you have to raid a cabinet television for a tube while cheesy 60s sci-fi plays, etc. These are just some of the things that give this adventure a feeling all its own.

To elaborate on Trüberbrook’s audio/visual package, the graphics are digitized hand-crafted miniatures. This process benefits some screens more than others, but it gives the game a unique, and frankly great, look. I had seen some gameplay images prior to playing, but actually having them displayed on a large HD television really helped me appreciate the care the developers took, and the effectiveness in which they pulled off the strong visuals. The music that accompanies this scenery, dubbed by the devs as “doom jazz”, is almost equally effective. It really fits the mood, and makes for pleasant background hearing without being overpowering. There’s an event later in the game, a titular town concert, with a bit of interactive music that’s really cool.

These are all especially nice, but what about the gameplay? In many ways, Trüberbrook plays like classics from the genre. You play mainly as a physicist, Hans, and occasionally an anthropologist, Gretchen, exploring the town and its surroundings You’ll search your surroundings and collect all sorts of items necessary to solve the various puzzles and advance the plot. You’ll also talk to over a dozen different characters, all fully voice acted. The quirky inhabitants are good and add to the mystery with their own unique concerns. This sci-fi tale channels classics like The Twilight Zone to current fare like Stranger Things.

With so much in its favor, I’m sorry to say that Trüberbrook falls short in a few key areas. One is the controls. While certainly workable, they are not intuitive, nor are they optimized for the Nintendo Switch. You can’t use touch controls, or the Joy-Cons as pointers. Instead, one stick controls the character while the other controls a cursor. Why not use the timeless setup? To make matters worse, the cursor is very floaty, often making it a pain to lock onto what you want to interact with.

Another misstep is the inability to zoom in on text. While not an issue when playing docked, it’s very tough in handheld mode. If you see a book, newspaper, or anything else to read, you’re going to have a hard time. This also reflects the game’s lack of optimization on the Switch. Thankfully such text isn’t essential but simply used to flesh out the story of Trüberbrook and its surrounding areas while, perhaps, providing the mildest of clues.

One last area of concern is your inventory. While you can view a list of item icons, there’s no way to view your collection individually. Most games in this genre identify every item and make them available for easy viewing, but not here. I’ve no clue why, as it’s a genre staple. Such an oversight does reflect some carelessness. This also means that when you can use inventory puzzles on the environment the game selects them for you. Some might appreciate how this cuts down on trial and error, but it can occasionally feel like the game is playing itself.

Perhaps the latter decision contributes to the game’s short length. I beat Trüberbrook in less than six hours, short of the “7-10 hours” promised. However, I’m well versed in the genre, so take that with a pinch of salt. I want to stress that I still found the quest quite enjoyable, the ending satisfying, and the overall experience memorable.

This game has a few sizable issues that hold it back from greatness. But for genre fans, Trüberbrook succeeds thanks to its sci-fi plot, quirky voice-acted characters, and exceptional aesthetics. Non-graphic adventure enthusiasts should wait for this $29.99 release to go on sale, which will make its issues easier to overlook. Unless you opt for the physical release, which comes with a sweet 24-page, full-color travel guide.

This game has a few sizable issues that hold it back from greatness. But for genre fans, Trüberbrook succeeds thanks to its sci-fi plot, quirky voice-acted characters, and exceptional aesthetics.