One of the great things about video games is that you can take just about any bizarre concept that you can imagine, and so long as the mechanics of your game are fun, people will gravitate towards what you’ve created. Admittedly, creating a video game where your main objective is to roll a seed up a mountain seems really odd, but that is exactly what you do in TumbleSeed; a roguelike title developed by indie studio aeiowu for the Nintendo Switch. Despite the strange concept, TumbleSeed’s unique control scheme and challenging gameplay make for a fun time, provided you have the determination to see your mission through to the end. 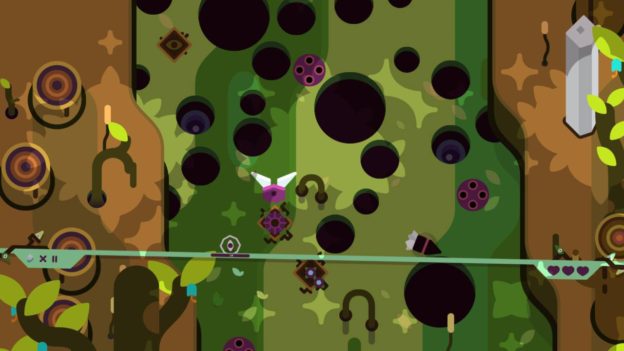 The world is beautiful, but don’t relax! Did you see the enemies hiding in the holes?

Right off the bat, TumbleSeed’s presentation is very welcoming with its color choices and busy environments. The simplistic design of the characters and enemies in the world means you can have a lot of action going on in each stage of your mountain climb without your eyes feeling overwhelmed. Enemies and obstacles also tend to pop from the rest of the stage thanks to their brighter color schemes, and although they may not be easy to avoid, you can almost always see them coming. Music also plays an important role, as many of the game’s tracks help create an appropriate mood or atmosphere for the type of environment you’re in. Both the music and design elements come together to create a mysterious, yet light-hearted atmosphere that is fun to traverse through. 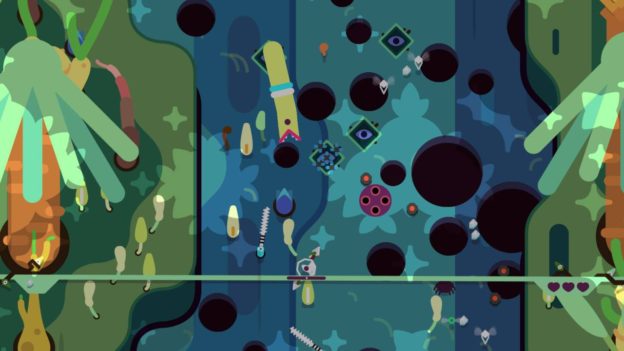 TumbleSeed can get pretty stressful at times. The key is not to panic!

The core gameplay mechanic of TumbleSeed is all about balance, and this is where the fun and sometimes frustratingly hard challenge of this title lies. Using the left and right joysticks in tandem, you press up to raise a horizontally growing vine upwards so that it carries your character (a seed of prophecy that must plant itself on top of the mountain to bring peace back to the troubled citizens of said mountain), to your goal. In order to dodge obstacles, you’ll have to tilt the left or right side of the vine up or down with the respective joystick in order to get your seed to roll away from danger. Not being in complete control of the main character feels really strange at first, but you’ll quickly get the hang of things. Leaning back in your chair with one Joy-Con in each hand feels pretty natural (not to mention being able to feel the HD rumble grow stronger as your seed rolls faster is pretty cool), and it quickly became my preferred method to play over the pro controller or Joy-Con grip. 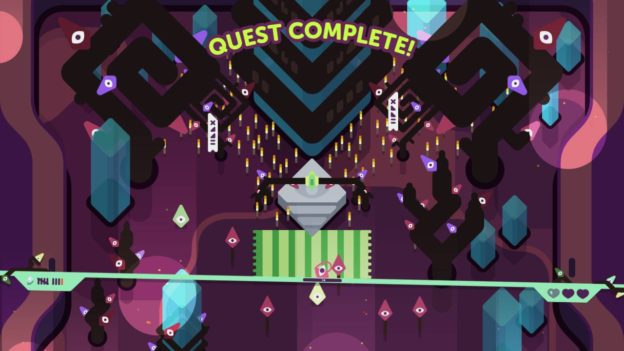 Completing quests is a nice way to keep the game fresh on each attempt up the mountain.

In my experience, there are two ways you can play TumbleSeed. You can either fiercely charge up the mountain, collecting powerups as you go until you reach the finish line, or you can complete the quests given to you by the elder, and slowly earn warps higher up the mountain. The first method will most likely end in failure, as no matter how much progress you make, if you burn through the three hits the game initially gives you, you’ll have to start all the way at the very bottom. Being a roguelike game, each stage of the mountain is procedurally generated, meaning you’ll see a different layout of pitfalls and enemies each time you play. This makes each run up the mountain more unique and interesting, but it also keeps the challenge high as you won’t know what to expect. The second option, completing the quests, allows you to earn your way up the mountain, while getting the chance to try out some of the powerups and minigames available to you. This option definitely takes away much of the frustration of having to play the same stage over and over again, but it still manages to keep the game challenging while giving you an easier way of progressing through the game. 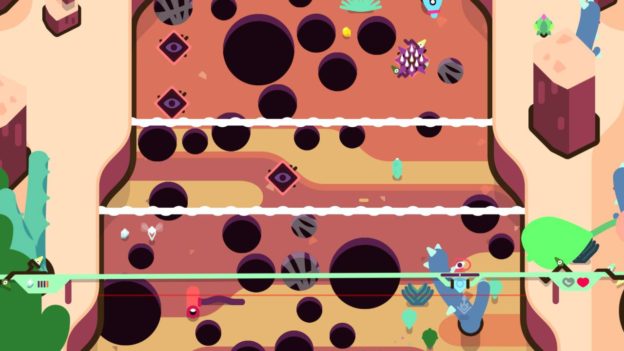 Yup, you guessed it. Those streams of water will kill you if you cross their path.

Whichever way you decide to make your way up the mountain, there will be plenty of items to help you on your quest, as well as enemies to stop you. There are 30 powerups to use within the game, but the powerups you find in hidden areas or in shops are randomly generated each time you play, so you’ll have to work with what you’re given. Some powerups will give you an edge so you can take out really strong enemies such as canon fire or invincibility, while others allow you to play more defensively such as giving you a spring jump or cloaking ability to allow you to quickly get away from danger. Each power requires shards (the game’s currency) to work, and you can earn these by defeating enemies or collecting them in a stage. You’ll also only be able to activate a power by running your seed over patches of soft soil which are scattered throughout the level. Having to pick and choose what powerups to take and when to use them makes the game far more challenging, but also much more fun and meaningful. 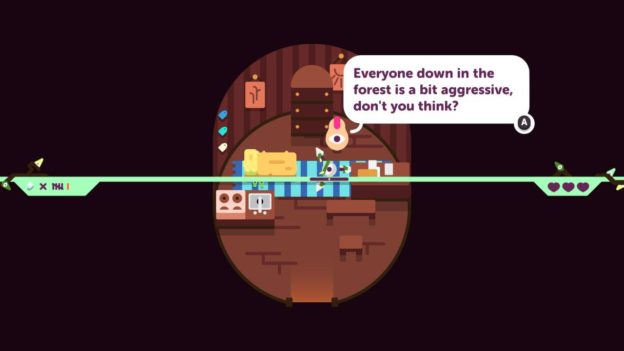 The entire mountain seems to be a bit aggressive, but you’ll have to be a brave little seed and venture forth anyways.

In addition to the powerups that you can find, you’ll always start off each attempt with four standard powerups. These include flagseed, which lets you plant a flag so you won’t fall down as far if you land in a pitfall, thornvine, which gives you thorns you can attack enemies with, crystal, which allows you to harvest more crystals so you can use more of your powers, and heartseed, which allows you to earn more hearts so you can take extra hits. Using these base powers along with the ones you find on your travels is key to success, and you have all the basic tools necessary to create a playstyle that suits your needs. 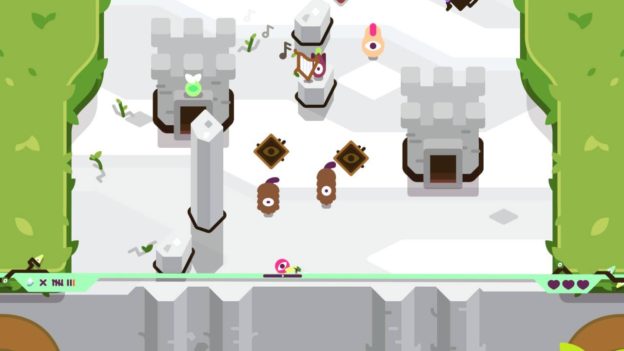 Basecamps offer a nice respite. Say, is it me or do those brown seeds look like…

In case you need a break from the action, between each stage of the mountain climb, there is a base camp that allows you to catch your breath and talk with some NPCs. While inhabitants of the camps don’t say too much, they can provide some helpful tips, and they do create a livelier atmosphere. There are minigames that you can partake in as well, and if you manage to complete a task such as destroying all the targets or hitting all the switches in a maze within the time limit, you’ll be able to walk away with plenty of shards for the next part of your climb. They may be simple, but the base camps are a great way to give yourself a bit of a rest before you get back into the fray. 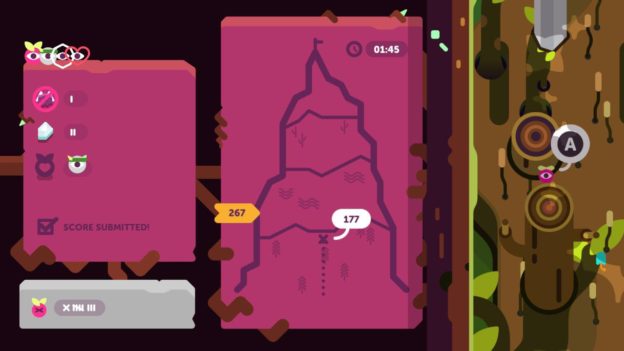 After every defeat, you’ll be able to see how far you’ve come and your high score will be updated on the leaderboard.

TumbleSeed is a fun indie title with a great atmosphere and interesting gameplay, but it’s not free of problems. This is by no means an easy game, and oftentimes you’ll be expected to carefully maneuver around pitfalls while simultaneously trying to outrun enemies that have much greater mobility than you. While you certainly have the tools to make it through these challenges, there can be times where you simply don’t have enough shards to use your powers to get you out of a jam, or you may panic during a heated moment and end up losing all of your health in a matter of seconds. This can be extremely frustrating, and if the idea of having to grind a stage over and over until you’re good enough to pass it doesn’t sound appealing, this might not be the game for you. The price tag, at $14.99 on the eShop for a game with four stages is also something to consider, even if you’ll spend hours trying to complete the game. 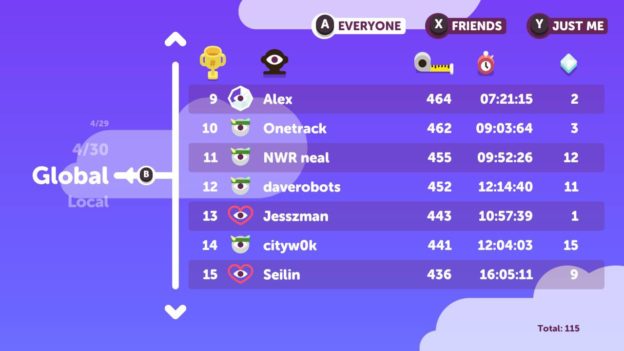 For one glorious moment, I was in the top ten on the leaderboards.

However, despite these flaws TumbleSeed has plenty of good things going for it as well. The atmosphere in the game is fantastic, and being able to customize your playstyle by picking and choosing what powerups are available to you makes the game play much more meaningful and fun. There is even a daily online leaderboard, so if you’re the competitive type, you can compete to see how quickly you can make it up the mountain. If you don’t mind replaying a stage until you get good enough to beat it, you can have a lot of fun with TumbleSeed, especially since the Joy-Cons are such a good match for the style of gameplay offered. If you’ve read this far and still find yourself curious, this may be a title for you to consider.

TumbleSeed is a unique title with an interesting control scheme and a wonderful presentation that will draw you in. The game’s tough difficulty, however, can be the high or low point of the game, depending on how much you enjoy grinding to get good enough to beat a stage.