Turok 2 has arrived on the Nintendo Switch, a few months after the first game, now with a new Teen rating (evidently for less gore). While I didn’t play this title back in the day – too busy with the 007 FPS games – Nintendo 64 nostalgia made me think I might be a solid choice to review this remaster. 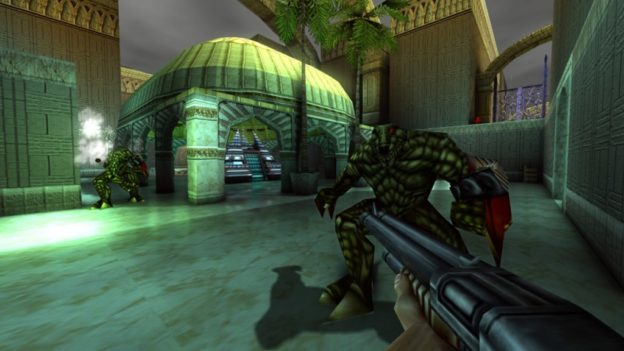 Settings are the one area where Turok 2 really excels. You might not think this significant, but I found the fresh choices most welcome. Going back to the new Teen rating, you can now disable death cinematics, turn the blood green, or even turn it off altogether. Going beyond less violence, a multitude of visual settings make this title look more like my rose-colored memories of Nintendo 64 games. As far as the music goes, you can listen to the original N64 cartridge soundtrack or the PC (CD) version. Up the brightness by 25% or so to really appreciate the visuals, and plug in some headphones to immerse yourself in the right-on tunes; these are proper remaster steps by Nightdive Studios.

For those who missed it in 1998, the story of Turok 2 has something to do about the threat of temporal energy destroying the universe. An alien, who you’ll interact with regularly, instructs you to protect energy totems to keep another alien imprisoned on his ship. I know very little of the prior game’s plot, or the comics before that, so keep this in mind with my fuzzy memories. Basically, you defend against dinosoids (genetically engineered dinosaurs). If you enjoy games with dinosaurs, and who doesn’t, you’ve probably already given Turok 2 a look. This game does try and blend its sci-fi dinosaur plot with more serious themes, but it doesn’t succeed. When I’m riding back triceratops with guns mounted, like something out of the mind of Calvin from Calvin and Hobbes, don’t bore more with talk of undead legions or other clichéd ill-fitting nonsense. Stay focused on dinosaur hunting. 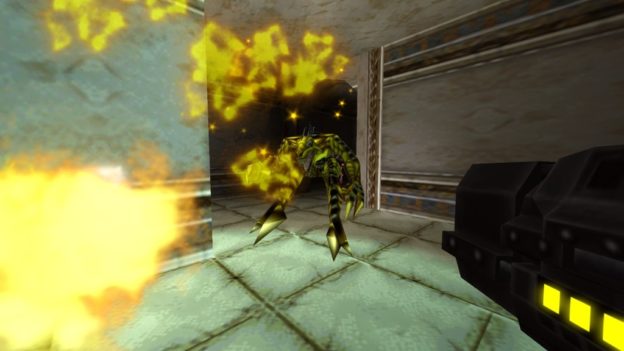 These well-animated dinos aren’t mindless either, even on the easy setting. So don’t expect to dispatch them quickly, even with 20 plus weapons. They’re spread across six levels, which might not sound like much, but these locations are absolutely huge, to say the least… too huge actually. Turok 2 is more like a FPE (first-person explorer) game, albeit an uneven one. Do expect a substantial amount of backtracking to dampen your enjoyment, as there’s little on offer to make retracing your steps feel all that interesting.

To illustrate, I reached the end of the first level having only rescued three of the four children, so I was sent back to start – not the best of early impressions. To find the fourth, I had to scour the subpar map, and I’m wondering if 90s maps were always of little help and I just put it out of my mind. Eventually,  I had to jump onto a broken ladder, and I swear it took me dozens of attempts. Subsequent levels have shown me that the design, in general, is needlessly complex, with the developers reach exceeding their grasp for the genre. While still entertaining in parts, I also feel like much of my time is being wasted. This was probably easier to deal with back on the N64. As the cartridges could cost $70 or more, sinking a lot of time made them feel like a better value. In turn, the smaller N64 library meant there were fewer gaming options in general. But in 2019, my time is too precious, and inexpensive choices too numerous to lollygag about with Turok. 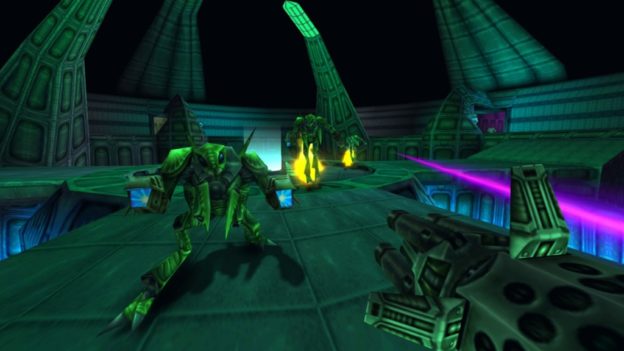 Dated level design aside, the elephant in the room concerning this Switch port is the lack of multiplayer. Back in the day, Turok 2 was universally praised for its competitive component, with many, if not most, recommending it for multilayer alone. So it’s absence here (with no real reason given why) is curious if you’re feeling charitable, moronic if you’re feeling blunter. Sorry, but it simply cannot be ignored. It gives Nightdive Studio’s Xbox One port a big advantage.

While there are absolutely zero excuses for the missing multiplayer, I suspect Turok 2 might still draw a bit of a nostalgic audience on Nintendo Switch. Having a smoother, fogless experience (no $30 Expansion Pak needed) with modern touches like gyroscopic controls and a wealth of player options does help. But this game is uneven and dated, and it shows. Add in the cut multiplayer – I can’t stress that enough – and it makes Turok 2 just a so-so release on the Nintendo Switch.

I would very much like to see Nightdive Studios publish the Tex Murphy Collection to the Nintendo Switch.

While there are absolutely zero excuses for the missing multiplayer, I suspect Turok 2 might still draw a bit of a nostalgic audience on Nintendo Switch. Having a smoother, fogless experience (no $30 Expansion Pak needed) with modern touches like gyroscopic controls and a wealth of player options does help. But this game is uneven and dated, and it shows. Add in the cut multiplayer – I can’t stress that enough – and it makes Turok 2 just a so-so release on the Nintendo Switch.