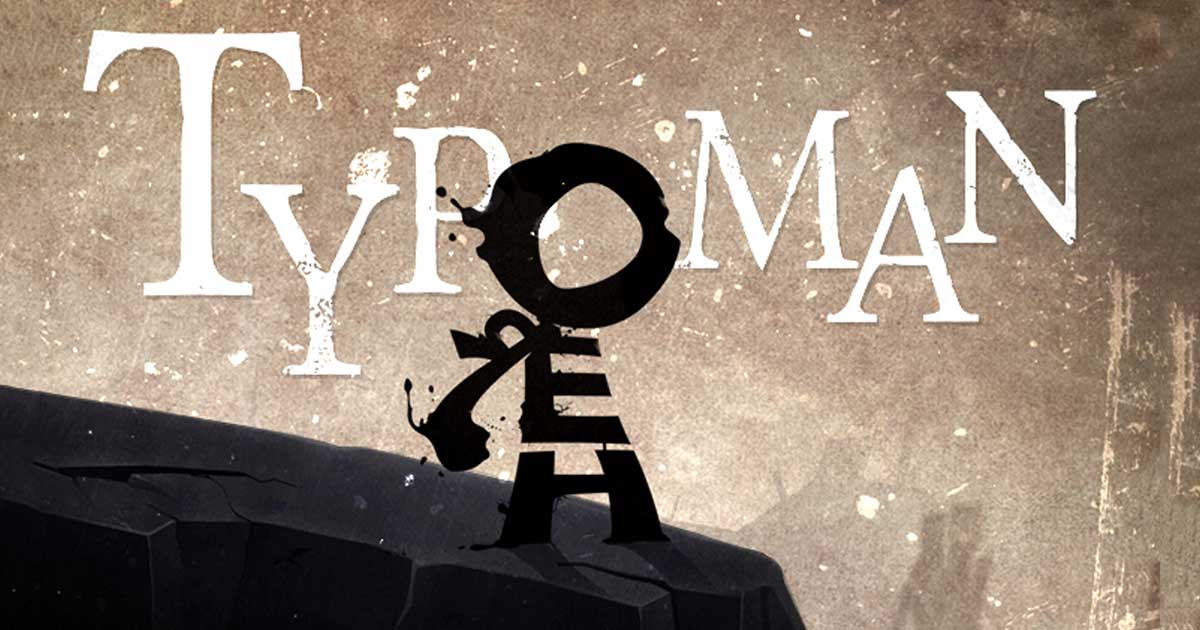 Typoman is the very first eShop indie title offering from studio Brainseed factory, and it features a very unique premise. Using the power of words, you must guide the hero through many treacherous paths as you search for a way to defeat the evil creatures that pursue you. If the game sounds interesting to you, then have courage. Unlock your mind from its cage, and rage on against your foes to victory. 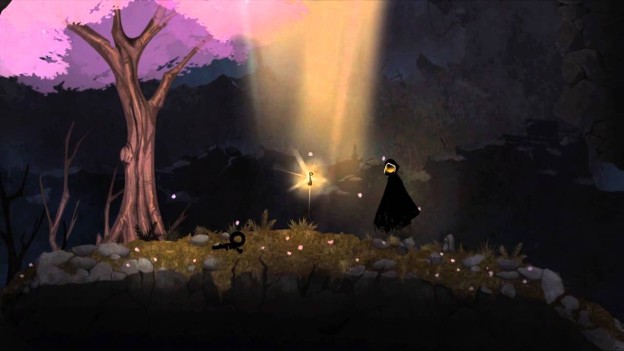 The story of Typoman is a rather simple one, but they way it is told through the game’s cut scenes is enjoyable regardless. Aided by a benevolent spirit with the power to craft words and harness their power, our hero is just trying to find his way to safety while avoiding the dangerous creatures and traps around him. The cut scenes don’t feature any dialogue, but the way that words come into play during these story-telling sessions masterfully convey the emotions onscreen.

While the words on-screen may add more emotion to the cut scenes, the music also plays a big factor as well. Typoman has lots of atmospheric tunes to supplement the gameplay, and the addition or subtraction of sound as you perform certain actions adds a dynamic feel to the soundtrack. The soundtrack may not be so memorable as to get stuck in your head, but it complements the action in the game nicely. 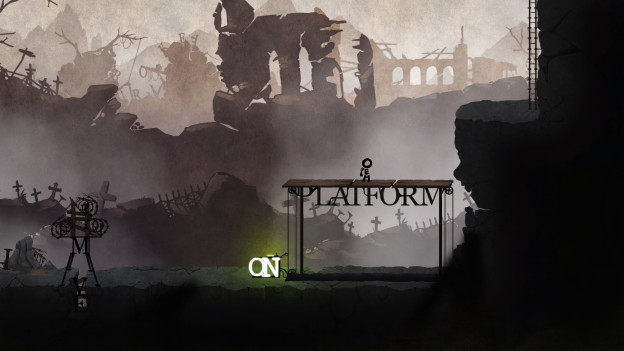 Much like the music, the visuals help build a very mysterious atmosphere. During your travels you’ll make your way through caves and factories, and the way words are littered about the stage like forgotten pieces of trash gives you a very foreboding feeling as you play. There may not be tons of color in Typoman, but the environments that you traverse are varied so the toned down color palette doesn’t feel dull.

Presentation wise, Typoman looks and sounds great, but the gameplay is where the game shines. Similar to the popular Indie game Limbo, Typoman is a platforming game where the player must keep moving right to get to the end of the stage while solving puzzles that block your way. The puzzles in the game are unique because the solutions require you to manipulate the letters scattered throughout the landscape to solve the puzzles. Is a giant cloud with the word rain inside it filling a ditch with water so you can’t get across? Throw the letter D on, and the word rain will become drain, thus emptying the reservoir so you can safely pass. The game is filled with plenty of these clever little puzzles, and it’s a lot of fun to figure out how to change the words so that they work in your favor. 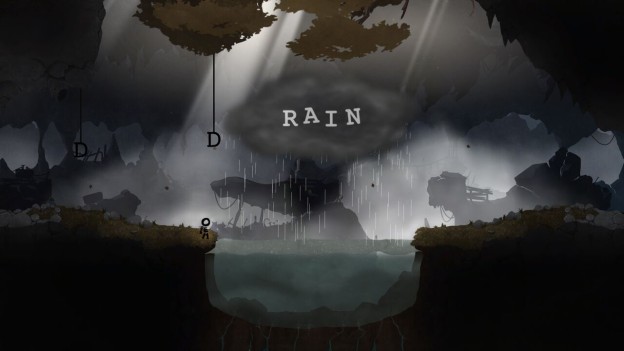 Manipulating letters in the environment is easy, as pressing the ZR button on the Wii U GamePad will cause your hero to grasp the letter, and using the control stick or D-pad will allow you to push or pull the letter into place. You can also throw letters with the A button, and pressing B will cause the hero to jump if you aren’t holding anything. The controls are nice and simple so you can focus on the task at hand.

Another big part of the game play focuses on unscrambling a bunch of seemingly random letters in order to craft words that will help you progress. Is a gun keeping you from safely passing through? Try using the letter generator nearby to craft the word cover so you can have a shield to protect you. These word scramble puzzles are made much easier by the use of the GamePad. After selecting the letters you need from the letter generator, pressing X will allow you to use the touchscreen on the controller to shuffle the letters around until they form the word you desire. This makes it much easier to experiment with different letter combinations until you find the answer you’re looking for. If you get stuck, the game does offer riddles that reveal the word you need to progress if you read it carefully, but these clues are completely optional and can be ignored if you choose to do so. Using them also has no penalty to the player, which is nice. 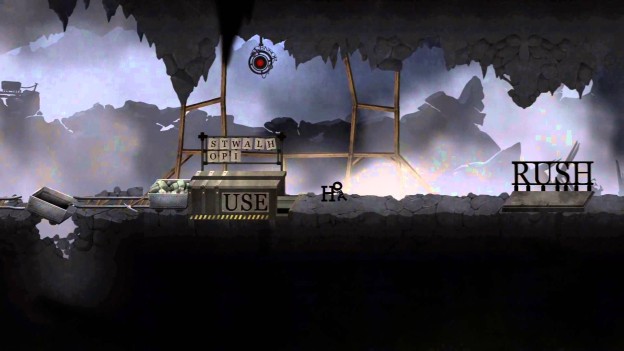 For a Wii U exclusive indie title, Typoman has plenty to offer you. The music and visuals are well done, and they help make the environments you explore mysterious and interesting. The word play mechanic is unique, and spelling the right word you need feels rewarding when you see how it changes the world around you to help you progress. The riddles added as clues about what to do keep you from getting stuck on a puzzle for too long, and they are a nice touch.

The game is short, however, as I was able to complete the story in just under four hours casually playing. I’d argue this works in the game’s favor, though, as a longer game would eventually make the word-crafting mechanic feel tedious. The $13.99 price tag should definitely be noted though, as once you’ve beaten the game there really is nothing to bring you back to play again, making this a title you may only boot up a handful of times. The game’s occasional stutter can also cause your controller inputs to not register, which can be frustrating during the more platform demanding segments, but this minor issue is far from harming your enjoyment of the game. Typoman as a whole has a really fun game mechanic, and despite its price tag I’d highly recommend it if you’re into the indie gaming scene.

Typoman’s word crafting mechanic adds a unique twist to the puzzle platformer genre that is genuinely fun to play, and the presentation is top notch. The $13.99 price tag should definitely be considered before purchase though, as the game can be finished in around 4 hours.