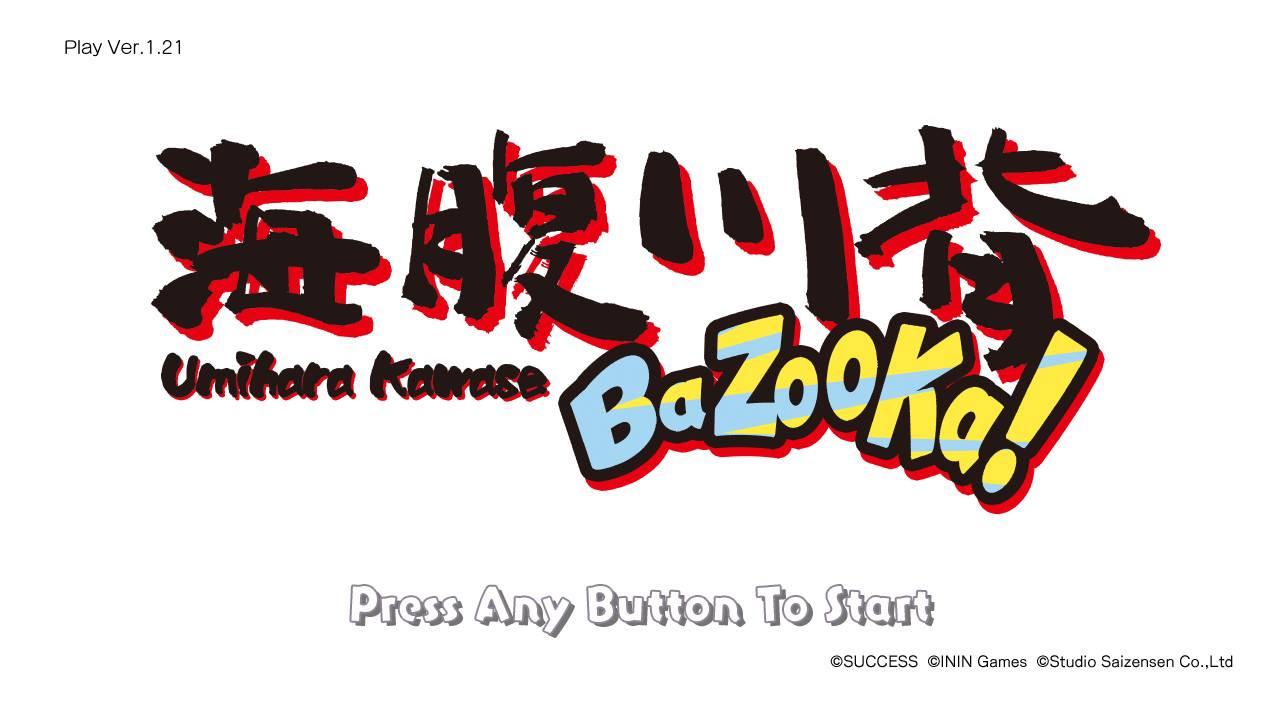 Umihara Kawase BaZooka! is an action arcade game where your main objective is to clear the screen of enemies. Other than that, there isn’t much else to this short game. Let’s see if it held my attention long enough. 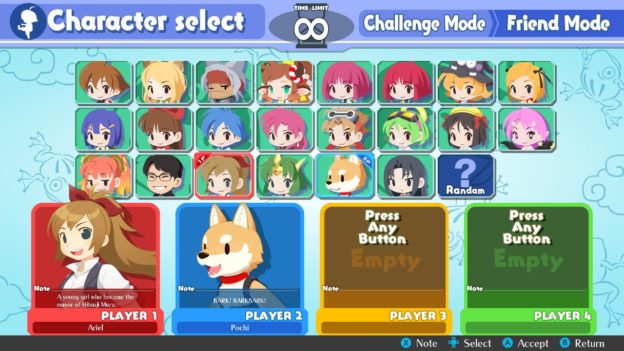 Luckily, this game can be played in single-player mode or with up to four people in total, either online or local co-op. You’re able to play through the main mode alone, but I played it with my sister. I’m glad I did, as it was a lot more fun that way than playing by yourself.

There are 22 characters to choose from, each with their own special abilities. For example, my character’s special ability was to throw sheep at the enemies while my sister had heat-seeking bombs. Every character has a fishing rod that can be used to grab enemies and turn them into bazookas, grab ledges, or take hold of any actual bazookas that drop onto the playing field. 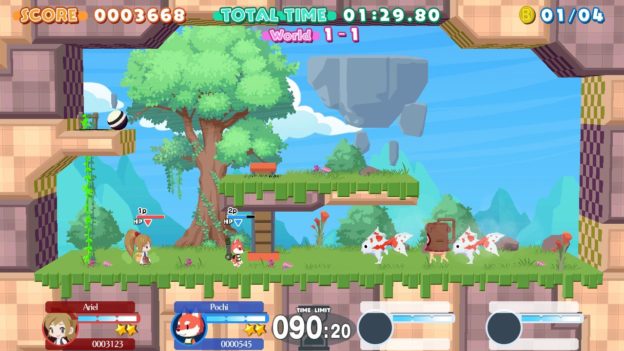 Umihara Kawase BaZooka! has four worlds in total, each with ten levels, with the tenth being a subpar boss battle. These levels consist of waves of enemies you need to defeat and gather coins. The waves don’t end until you collect enough coins to move onto the next stage. Some stages needed as little as three coins to move on, while others needed seven. I’m not entirely sure why some needed more. As far as I could tell, the coins didn’t even do anything. It was just a way to move on, and that’s all. There were no extra items to buy or anything.

The enemies weren’t too tough. All could be defeated by shooting a bazooka at them. Alternatively, you could grab them with your fishing rod, which turned them into a bazooka, and then shoot them at the rest of the enemies. My character also had a hoe I could thwack them on the head with, as well as a purple potion I could throw at them to lower their HP. Not only were the enemies tough, but the waves weren’t challenging either. Some waves would have up to ten enemies, but the platforming stages were a decent size that you could easily navigate the scene. 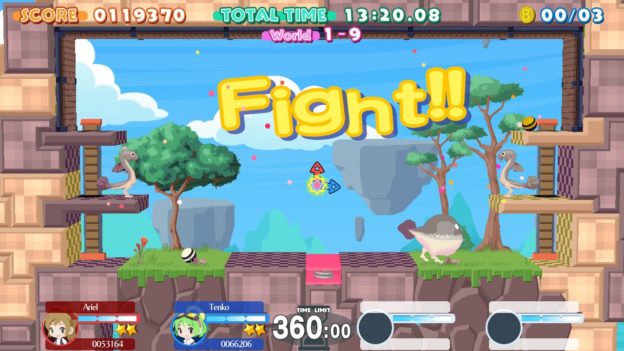 The annoying part was when you do get hit, though. Your character bounces backward a few times before actually getting back up. This was pretty frustrating when there were many enemies around because then you’d hop into another bad guy. Right as your character decides to stand back up, the hitbox on the enemy you bounced into goes into play, and you get hit again.

You do have lives, though. Once you lose all your lives (or both you and your friends if playing together), it’s game over. However, each stage saves. If you die on stage five in world two, you can start again on stage five, world two. Also, if you lose all your lives on a stage and your friend beats the level, you’ll regain a life for the next level. When my sister and I got the hang of the gameplay, we never had any game overs and cruised through the game.

Umihara Kawase BaZooka! is a short game, as mentioned earlier. Once you beat all 40 stages, that’s it. There are no bonus levels to unlock. There are 22 characters, which is great, but there’s nothing to unlock from the roster, either. You can’t even buy anything with the coins you collect. You’re not working toward anything, and there’s no story. Even though this was fun to play with my sister, we didn’t get the game’s point and weren’t motivated to keep going. We kept going for the sake of this review, but the replayability is weak, and I most likely won’t be turning on this game again.

There are three other modes to play in, though. These, unfortunately, are almost the same thing. The Rival mode is the main mode, but instead of cooperating with your friends, you’re against each other. There’s already a point system when you’re on the same team, and it calculates your score based on the enemies you defeat, so this mode felt pointless. 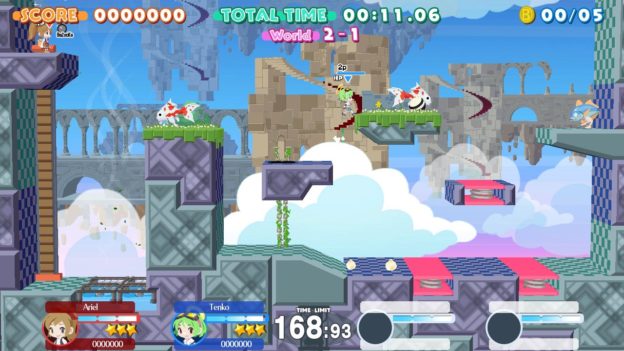 There are also two battle modes. One requires you to “take stars from one another.” I thought this would be a keep-away mini-game thing, but then I realized the stars are our lives. So, we were essentially fighting each other with enemies on the board. The other battle mode was the same thing but without enemies mixed in.

I won’t be picking this game up again, but I will admit my sister and I shared many laughs while playing. It was mostly out of confusion about the game and us accidentally killing our characters because of the ridiculous knockback. Just the silly gameplay in general—when I found out I could release a horde of sheep to attack the enemies, we were taken by surprise. 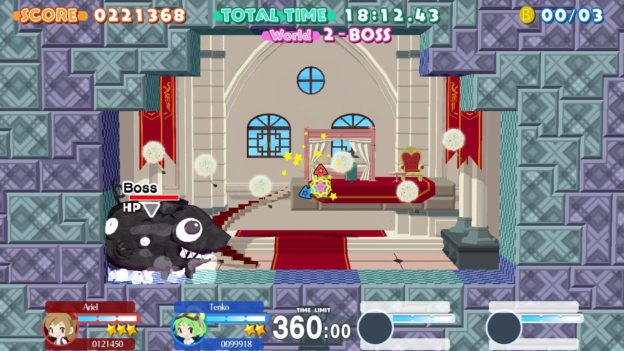 Despite that, the controls were smooth and responsive. The enemies had variety, as did the 22 characters. The level designs weren’t too bad, either. The music will go right through your head—it’s energetic enough for a fighting game, but the same song goes on a loop for the entire game, except for the boss battles. These stages played a lullaby-like song for some reason.

Play this game with a couple of good-humored friends. You’ll get some laughs and have fun with the game, but only for a short time.

Umihara Kawase BaZooka! is an arcade fighting game that’s best to play with friends. The enemies and levels are diverse enough, but the overall gameplay falls short.