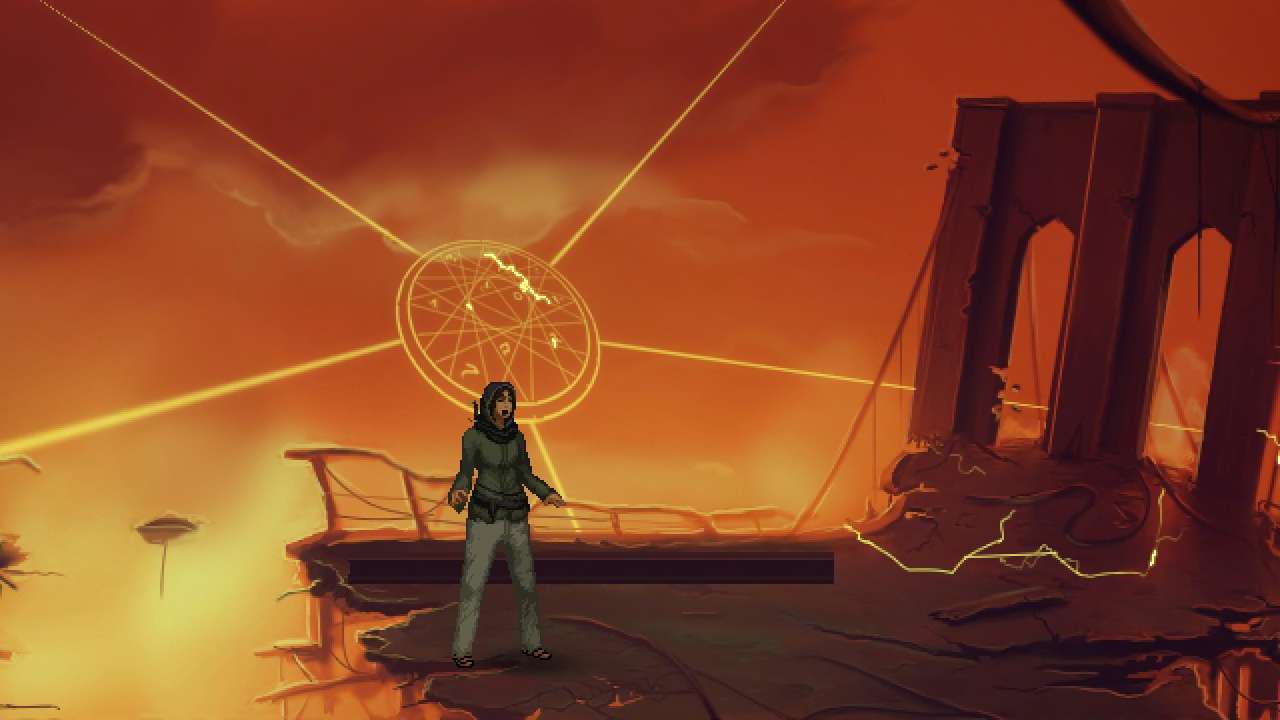 These streets will make you feel brand new.

The Big Apple is all wet. No, really, in Unavowed, you are in “present day” New York, and it seems to be always raining. And even though you don’t have an umbrella, it doesn’t seem to bother you too much.

Unavowed is an adventure/story telling game with cops, Jinn, demons, ghosts, and an ice golem. There is plenty more in this game, but you’ll see them as you play. It begins with you on a rooftop being restrained by one person and assaulted with lightning bolts by another (don’t worry, it’s not as bad as it sounds). During this encounter, you get to choose your gender and your occupation (cop, bartender, or actor). Each of the vocations will change certain aspects of how the game plays out. For instance, the cop is good at projecting authority and getting detailed information from an area, the bartender is empathetic and can get people to talk or cooperate, and the actor is good at deception and manipulating people. 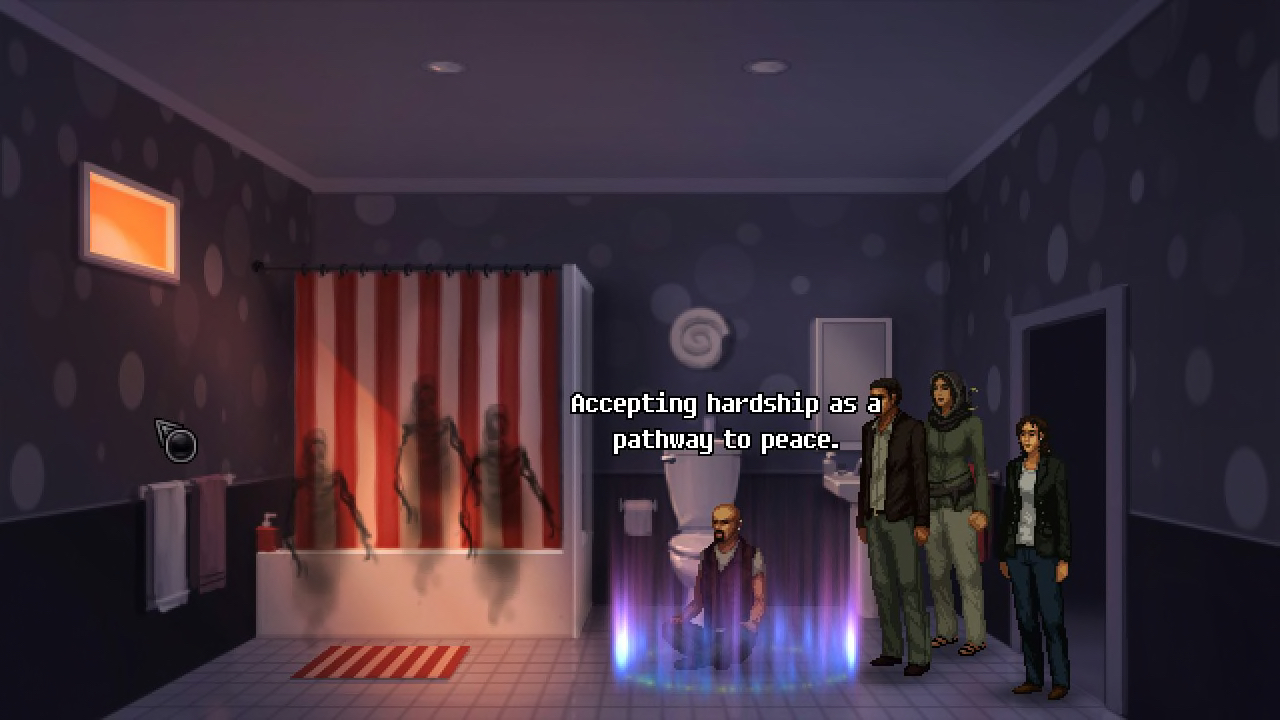 Now that you know who you are, you get to know your new friends—members of an organization known as The Unavowed. They consider themselves a wall between the mundane world (sort of like HP and “muggles”) and the dangers of the supernatural world. You can almost think of them like the BPRD from Hellboy. The leader of your chapter is a Jinn named Kalash (yes, he’s blue, and yes, he lives in a bottle on the mantle in the study at headquarters). The rest of the group, at least at the beginning, includes Mandana (a sword wielding half Jinn) and Eli Beckett (a fire mage). As you move through the story, you meet new NPCs, a few of which will join your band of demon hunters. Did I forget to mention that the demon you’re all hunting used to possess you, and did some pretty nasty things while it was in your body? You need to take your team on the hunt to get this thing and right the wrongs (you know how these things go).

As you take the subway and walk around New York, you meet some interesting people, some of whom are already dead. You can’t talk to ghosts, but you may pick up a team member who can. While you get to collect associates, you can only take two with you on your walkabouts. Whatever two you choose, at least one of them must be either Eli or Mandana. You can take your best guess, but sometimes you don’t have the team member you need for a particular chapter. I got stuck in a storage room and had to start the level over because I didn’t have the one person needed to get out of the trap. That was only mildly annoying, as it didn’t really cost anything but five minutes of replay time.

There is plenty of going back and forth between scenes to gather information so you can get things you already know you need, but that you can’t have because you haven’t spoken to the right person yet. There were some points where this got a bit annoying, but letting the characters get through all the dialogue and discovery isn’t all that bad. Besides, you do pick up on some interesting story elements this way. 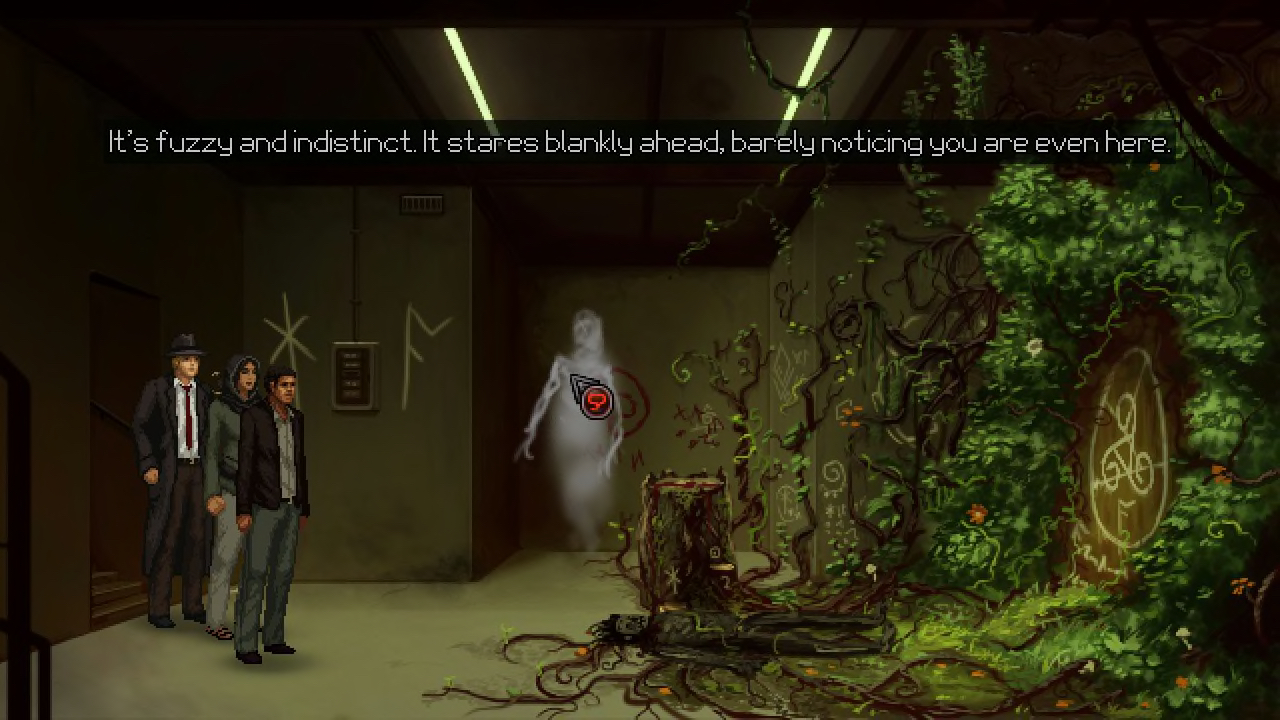 Speaking of selecting things, don’t forget to keep an eye on your inventory. To see it, all you need to do is hover the pointer over the top of the screen. You will see a horizontal strip with the other members of your party, and all the items to which you have access. You can use an item yourself or assign it to one of the other members of your party to use. You can select a party member, then an object in the scene. If that character can do something, they will use their skills as directed. This gets very handy when you need to talk to a ghost, retrieve an item from a narrow ledge, or otherwise do something your avatar can’t. Sometimes, the puzzle is figuring out who and what to use, and how to use them, to accomplish the task at hand. Be warned, some of the solutions can be real bummers.

Regarding cursor movement and selection, there isn’t much to worry about in the way of game controls; the analog stick moves the pointer/selector on the screen, the A button uses an item, the Y button will identify any items of interest in an area. One note on controller behavior is that the Joy-Con can be a bit touchy. There is a sensitivity control setting, but even on low you need a gentle touch to land the cursor on some of the smaller targets. On the upside, the D-pad will toggle onto elements with which you can interact, so you don’t need the Joy-Con for that. If you are playing in handheld mode, you can use the touchscreen, as well.

Visually, Unavowed is yet another in a long line of “retro” looking, slightly pixelated games trying to look like they are from 1998, as if this lends it some sort of gamer cred. I can appreciate a good vintage game, but I think we are at a point where we can make things look a little better, especially considering what the Switch can really do. 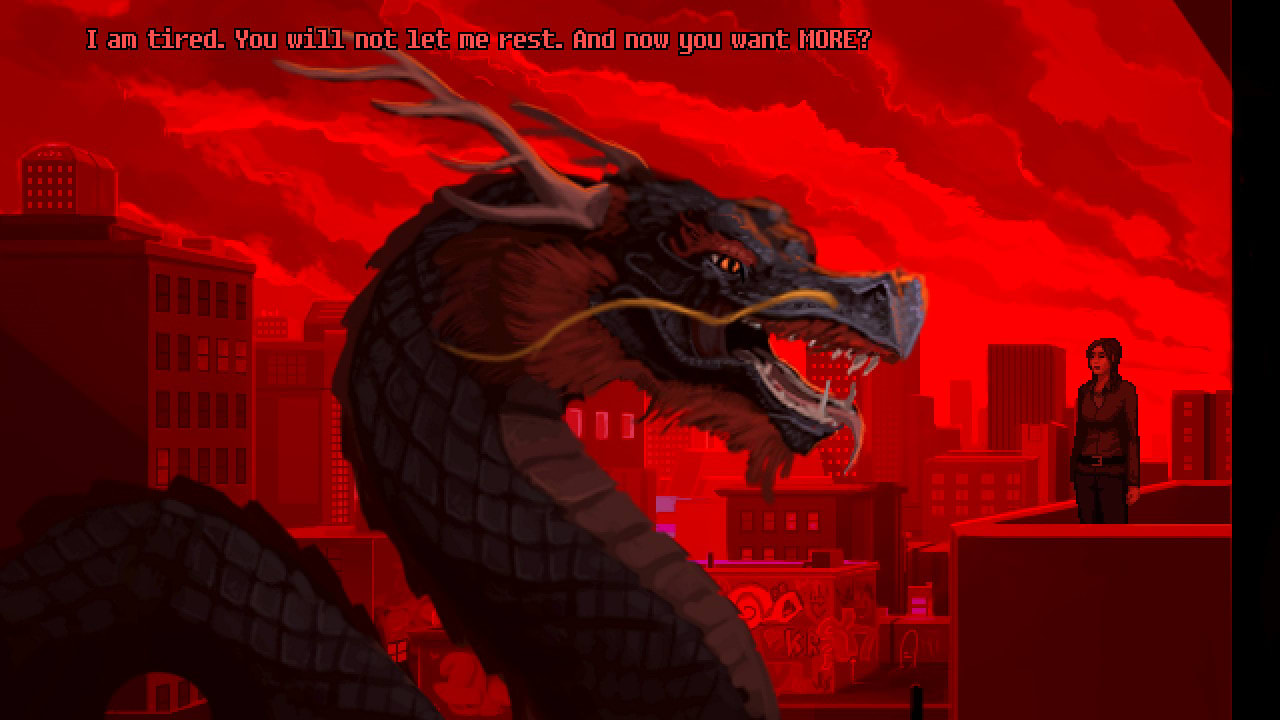 The background audio and sound effects are fine, and the dialogue is clear, albeit rather vulgar in places. Then again, the game is rated M (17+) because of the language, violence, and adult themes (demon possession isn’t exactly a kid friendly subject). One other concern with the graphics is that the game has a tendency to hesitate when cutting to a new scene. The pause is only a second or two, but it does disrupt the flow of things. As obvious as this is, it doesn’t really hurt the game; there is almost never any action going on to which you must react during the delay, so no harm there.

The game offers different questions you can ask and different options you can choose which can affect some of the outcomes in the game. There is a slightly different experience playing as each of the three character vocations as well, so there is some replay value here as well. 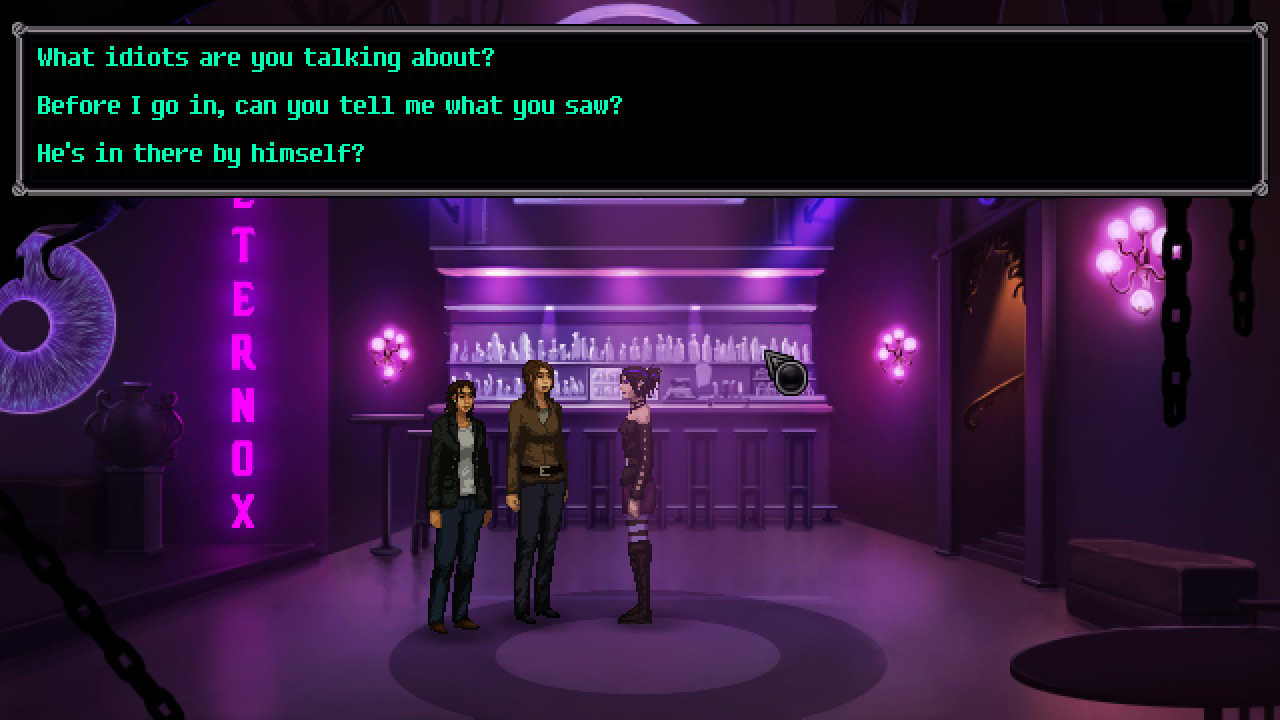 Unavowed is a bit dark and includes some crude imagery and language, and there are a lot of “shades of gray” versus obvious black and white / good versus evil interactions—you will need to find your way. While we all enjoy knowing who the good guys and the bad guys are, this game also provides a little room for introspection on the human condition. All told, this is one of the better story adventure games I have played on the Switch.

Unavowed is a solid retro adventure game. The story is not always evenly paced, but it is compelling with plenty of twists and surprises. The gameplay is simple, and the parts all work together to make a coherent whole.