Undead Horde is an action game with elements from the RPG, strategy, and hack n slash genres. At first glance, you will say it’s the perfect Diablo clone, but upon further inspection, well, you will be disappointed.

The gameplay feels like a satisfying loop and very Diablo-esque, but the main issue lies within the lack of meaningful items. Despite the game having procedurally generated items and weapons to pick up, it does no good if they don’t feel unique; the items are currently routine and conformist.

There’s one factor, though, that makes the Undead Horde stand out: you can re-animate almost any dead creature encountered through corpses in the battlefield, graves, and summoning statues. Statues must be unlocked before they can be used. The only limiting factor is the command capacity of the Necromancer. The command capacity can be increased, though. 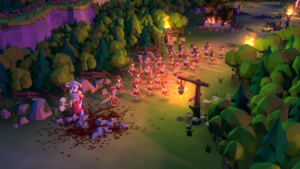 Even with such a compelling feature, it does not make up for its habitual gameplay. It doesn’t help that there is little to no replayability after making your way through the first and only era. While the developers have promised more replayability through adding eras (new areas) two and three post-release, I’m pessimistic it will make much difference due to the routine gameplay. The character variety changes the loop up a bit, so if the developers went in that direction I’d give it another chance. 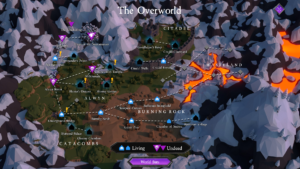 However, Undead Horde does shine in its art style and performance. There were no noticeable bugs or hiccups, especially in terms of frame rate. The gameplay felt smooth while looking “cool.”

The art style was a perfect fit for what this game was attempting, and without it, the game just wouldn’t be recommendable. While graphics and performance are flawless, Undead Horde has repetitive and routine gameplay that prevents it from reaching its potential. I’d say if you are looking for this type of a game, your best bet is saving up for the Diablo 3: Eternal Collection on Nintendo Switch.

While graphics and performance are flawless, Undead Horde has repetitive and routine gameplay that can’t save it from its potential. The art style is amazing, so it is unfortunate it has to be ruined by mediocre gameplay. I’d say if you are looking for a game like Undead Horde, the best bet is saving up for the Diablo 3: Eternal Collection on Nintendo Switch.