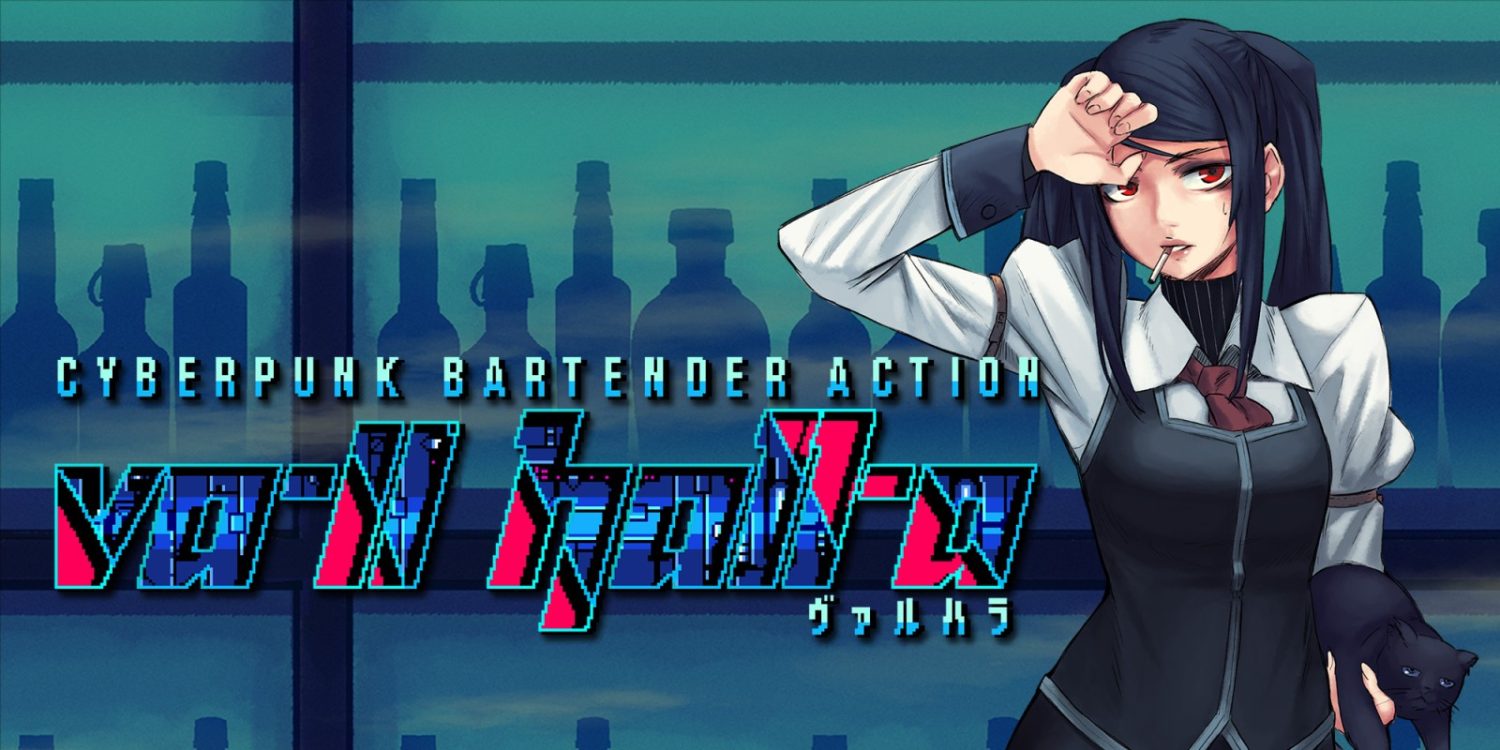 VA-11 Hall-A: Cyberpunk Bartender Action is an adventure simulation game from Sukeban Games and Ysbrd Games. The title may not seem captivating at first but the seemingly odd name makes perfect sense once you start playing; putting the game down is much more difficult. This is an addictive foray into a futuristic world as seen through the eyes of a random bartender.

VA-11 Hall-A is actually the name of a bar. It’s also a play on words since the bar is nicknamed “Valhalla”. You assume the role of Jill, the resident bartender. It’s your job to create a welcoming bar by using your conversational and drink-making skills. You even start your shift with your own motto: “Time to mix drinks and change lives.” 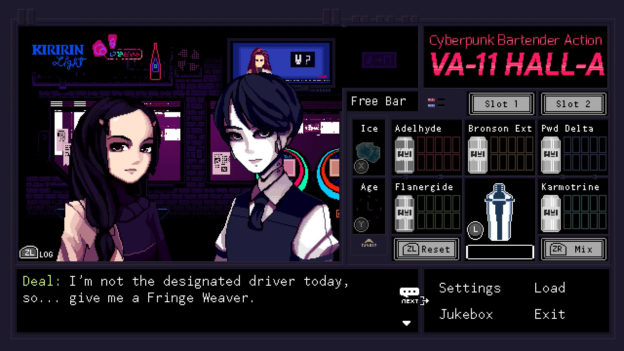 As you begin your journey into this dark, dystopian world, you’re presented with a simple on-screen message advising you to get comfortable. It asks you to “grab some drinks, some snacks, and enjoy! Sit back and relax. We hope you have a good time!”

This advice sets the scene for what’s to come. I’ve played heavily story-driven games before, but VA-11 Hall-A is literally a visual novel. If you’re not into reading, this game won’t be for you. But if you like a quirky story told in an unusual way, this interactive book will be right up your alley. 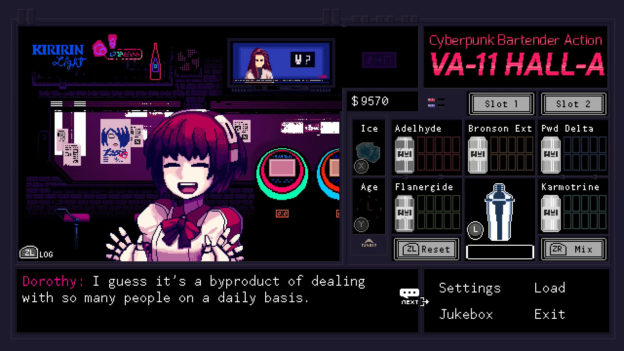 The story is set in Glitch City in the year 207X. Humanity has evolved to use nanomachines to enhance themselves. As a bartender, you’re privy to a lot of interesting characters, from peacekeeping soldiers to enhanced human hybrids with cat ears. You’re often visited by a somewhat sleazy editor and even a pop star makes a surprise appearance.

As each day unfolds, new tales are told. Your goal is to simply converse with your customers – text is automated, only requiring a simple button press to proceed after reading. You don’t choose your responses; instead, the story is driven by the drinks you serve. 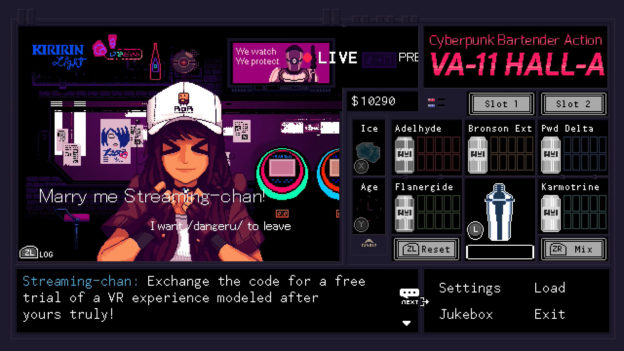 Sometimes a cryptic drink order means sorting through the menu to find something suitable. There are no wrong answers really, but there are better choices than others. This is reflected in the size of your tip and also affects the story. Maybe a dissatisfied customer won’t give you that juicy gossip you needed to hear in order to talk to another customer later. This branching method is a nice touch that sets the game apart from the usual conversational choices in story-driven games.

Mixing drinks is also fun and helps break the monotony of reading. The controls are great – you can use the touchscreen or control pad, both of which work very well. Each drink consists of up to five different ingredients, in varying amounts. Every button on the controller is mapped well, with options for adding ice (X button), ageing the drink (Y button), mixing (ZR), or blending (a longer ZR). Even if you don’t get it quite right at first, that’s ok – you can start over before serving to your customer. 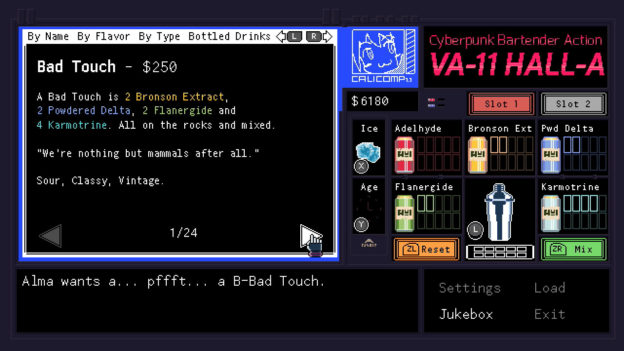 Apart from mixing drinks, there are a few other interactive elements. In the bar, you’re also the designated DJ who selects the tunes each night. You can do the same at home after your shift while you catch up on reading the news on your tablet. Your real goal is to make money to pay rent and other bills. You can also shop for posters and items for your cat if you want to do more with your character. Besides these few things, it’s really just a matter of settling in for the ride.

Despite the strange world it’s set in, VA-11 Hall-A is fairly light-hearted. There’s plenty of running jokes that will have you chuckling, whether it’s the smell of the bar or your coworker’s complaints about cleaning the toilet. When someone leaves a helmet in the bar, your boss somehow manages to get it stuck on her head. A guy named Art Von Delay must be a Seinfeld reference. And there’s some talk about our bartender’s sex life … or lack thereof. 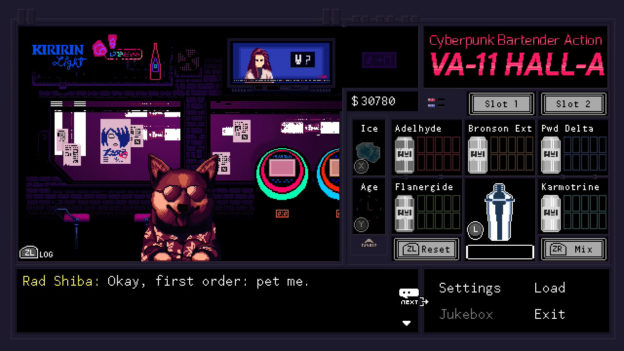 In this way, it’s also a mature game – at least, it discusses mature subjects. There’s a little profanity sprinkled here and there too but overall it’s not terribly offensive. Having said that, it’s not at all suitable for youngsters – it’s rated M 17+ after all.

Let’s talk about the graphics, since they are gloriously retro. I’m almost sick of using that term now, since it’s a very popular style, but when it’s done right, it’s worth mentioning. The 16-bit style suits the weird characters and their futuristic world so well. It’s like a PC game from the early 90s wrapped in a manga based on Bladerunner-like world. It’s a bizarre combination that totally works. Characters are also animated to a degree; their eyes blink and their mouths move, though there is no voiceover. In fact, the only audio is the soundtrack that you’ve chosen for the night. This is also deliciously retro, in a soothing synthy kind of way, and fits nicely into the background of a small bar of the future. There are upbeat and slower tracks; it’s worth playing through them all to see what you like.

Overall, VA-11 Hall-A: Cyberpunk Bartender Action is a unique game full of almost everything you could want from a story-driven adventure. Mixing drinks and changing lives proves to be an enjoyable and relaxing experience as you interact with many interesting characters. There’s loads of reading to do here but as long as you’re ready to read a novel while you play, this is one book, er, game that you won’t want to put down.

VA-11 Hall-A: Cyberpunk Bartender Action is a unique experience that’s literally a book in game form. Mixing drinks and changing lives proves to be a blast as you interact with many interesting characters. There’s loads of reading to do here but as long as you’re ready to read a novel while you play, this is one book, er, game that you won’t want to put down.