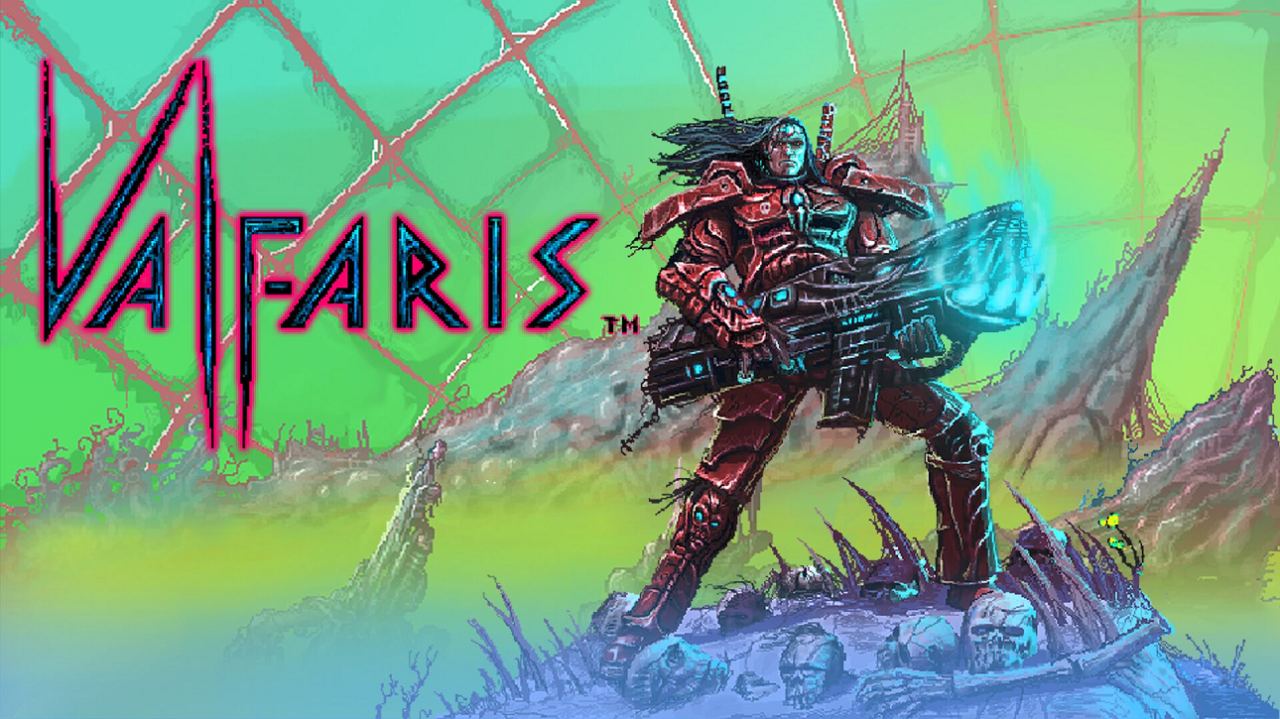 In the past, veteran heavy metal band Iron Maiden has released all manner of games, from pinball machines to their mobile game, Iron Maiden: Legacy of the Beast. You wouldn’t be considered mad if, at a glance, you believed Valfaris to be another addition to the Iron Maiden museum — all it’s missing is Eddie, their signature mascot (and their music, of course). Valfaris is orchestrated so it feels as heavy metal as possible. It’s soundtracked to metal, and then everything else about the game is also heavy (including the difficulty, but more on that later). Even the game’s protagonist, Therion, wouldn’t look out of place moshing at Download.

Valfaris is the name of Therion’s home planet. Once a “self-contained paradise”, it then disappeared without a trace. It has since returned, orbiting a dying star, filled with all manner of monsters. Despite having a plot best described as simply mad, it’s not really that important. Valfaris is a game you play more for the challenge as opposed to the story and Therion’s significant daddy issues. (It doesn’t take a genius to guess what may be revealed when you pull at that thread.) Along your journey you’re accompanied by a semi-nude A.I. — think Blade Runner — in what’s most likely a nod to the 80s, a decade the game is clearly influenced by.

As you travel through your once-idyllic home, there’s a high level of variety between stages in terms of visuals, and there’s plenty of detail in the background, which not only works in unison with the aforementioned heavy metal soundtrack but also the retro 16-bit art style. Based on style alone, without hearing the game’s score, it would be easy to comment on how it looks like a Super Metroid, but this would be reductive. The level of design is very straightforward, which in this case it’s actually a shame. A certain amount of exploration wouldn’t feel out of place, and very rarely do you find yourself with the opportunity to backtrack, which seems like a wasted opportunity.

Valfaris doesn’t hold back on the number of weapons you can unlock for your arsenal. The weapon choices are a primary weapon, a melee weapon, a shield and a quickly unlocked, more powerful secondary weapon which burns off a blue meter, in the same way as your shield. The primary, secondary and melee weapons are all changeable at checkpoints throughout the game as you continue to unlock more. They can also be upgraded with blood metal, the in-game currency. A special shoutout needs to go to developer Steel Mantis on the aptly named weapons, reinforcing the game’s metal aesthetic.

From the moment the game launches it offers relentless, in-your-face, non-stop action. At times it can be considered unnecessary, with the bosses littered throughout verging on masochistic in nature. What doesn’t help is the old aiming style, as you can only point your gun in eight directions with the D-pad (which feels especially bad with the joy-cons). This decision is a nice tribute to the games that clearly influenced it, but there’s a reason why twin-stick shooters have taken over — it’s a style of shooter that’s, simply put, more fun and less frustrating. Along Therion’s journey, there are generously-placed checkpoints that can be activated with resurrection idols. However, if you keep four resurrection idols you can get a health boost, adding a nice level of risk and reward to keep the game interesting.

Valfaris is designed to be the most metal package possible — its gore, art style, and music all aid the game in its heavy metal endeavours. Valfaris leaves a lot of space for more story, but through its weapon and enemy variety, it does a good job of remaining fresh for the whole time. From watching the trailer, you’ll know if Valfaris is for you, but be warned: it’s not for the faint of heart.

Whether you like heavy metal or not, Valfaris presents a package that’s worth your attention. From start to finish Valfaris doesn’t stop to take a breath, and the game’s quick load times keep you coming back for more after every death.