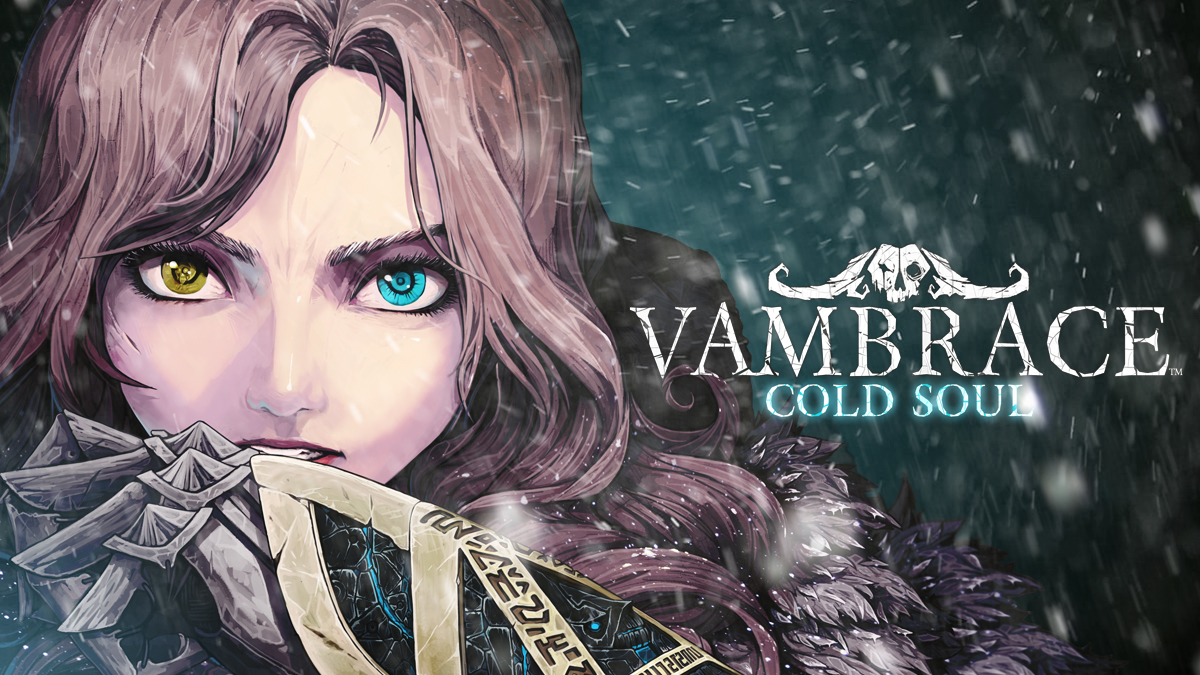 Vambrace: Cold Soul is a hard game to review because it had no interest in whether I liked it. It has no interest in whether you’ll like it. It’s one of the meanest, most spiteful games I’ve ever played. Should it concern me, then, that I had fun with it anyway? Despite its faults—and there are many—I enjoyed playing it; I just had to meet it on its own terms in order to do so.

Vambrace is a roguelike adventure with turn-based battles. You play as the poetically named Evelia Lyric, would-be liberator of the city of Icenaire. Its citizens are imprisoned by an evil spell, but you wield the Aetherbrace, a device that allows you to break through the barrier that traps them (it’s how you got into town, after all).

This ability to travel freely quickly endears you with the people of Icenaire, and they all seek your assistance for various, often selfish, reasons. 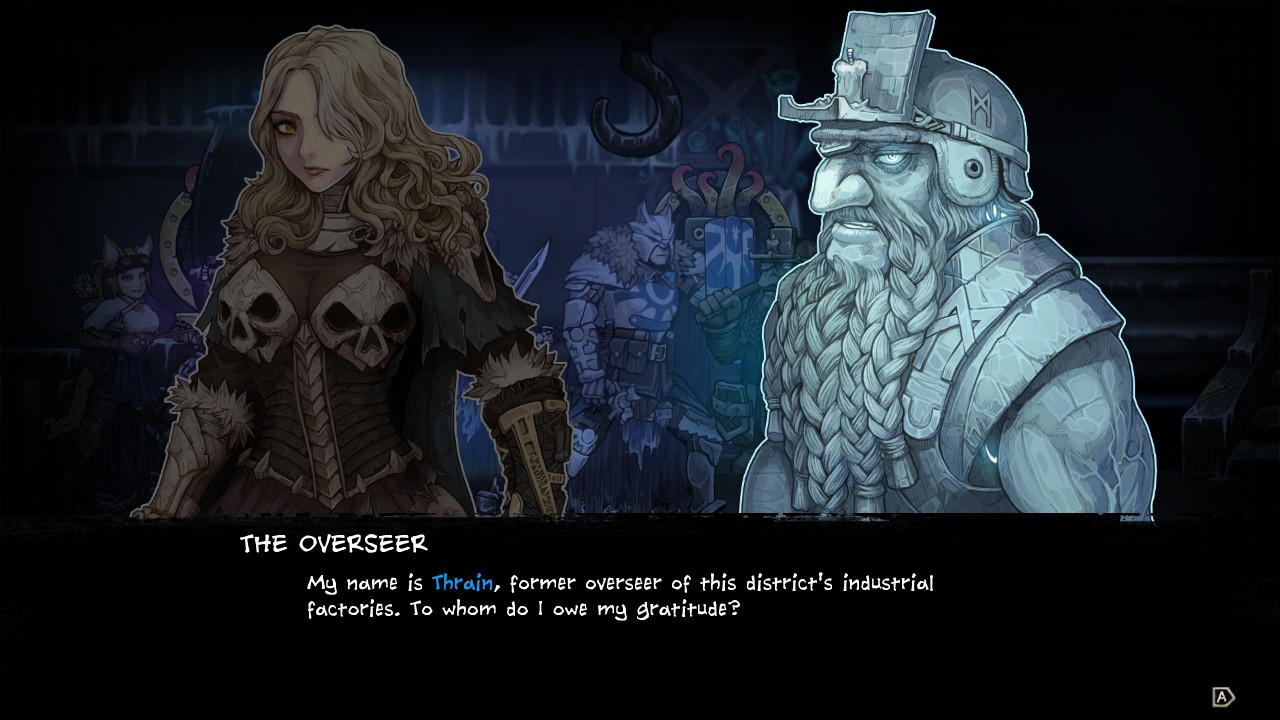 The story spreads across seven chapters and is filled with plenty of sidequests you can complete for…outfits. Yes, it seems the only real value of the sidequests beyond character development and lore expansion is that you can play dress-up with Evelia. Thankfully, most of the outfits are logical, and they honestly do bring some color to the bleak landscape through which you’ll battle.

Gameplay is broken up into two sections. Your time in the Icenaire underground serves to push the narrative along and to provide preparations for the battles ahead. You’ll wander to various buildings to meet other characters and accept quests, craft potions, and equipment, recruit your companions, heal up, etc. 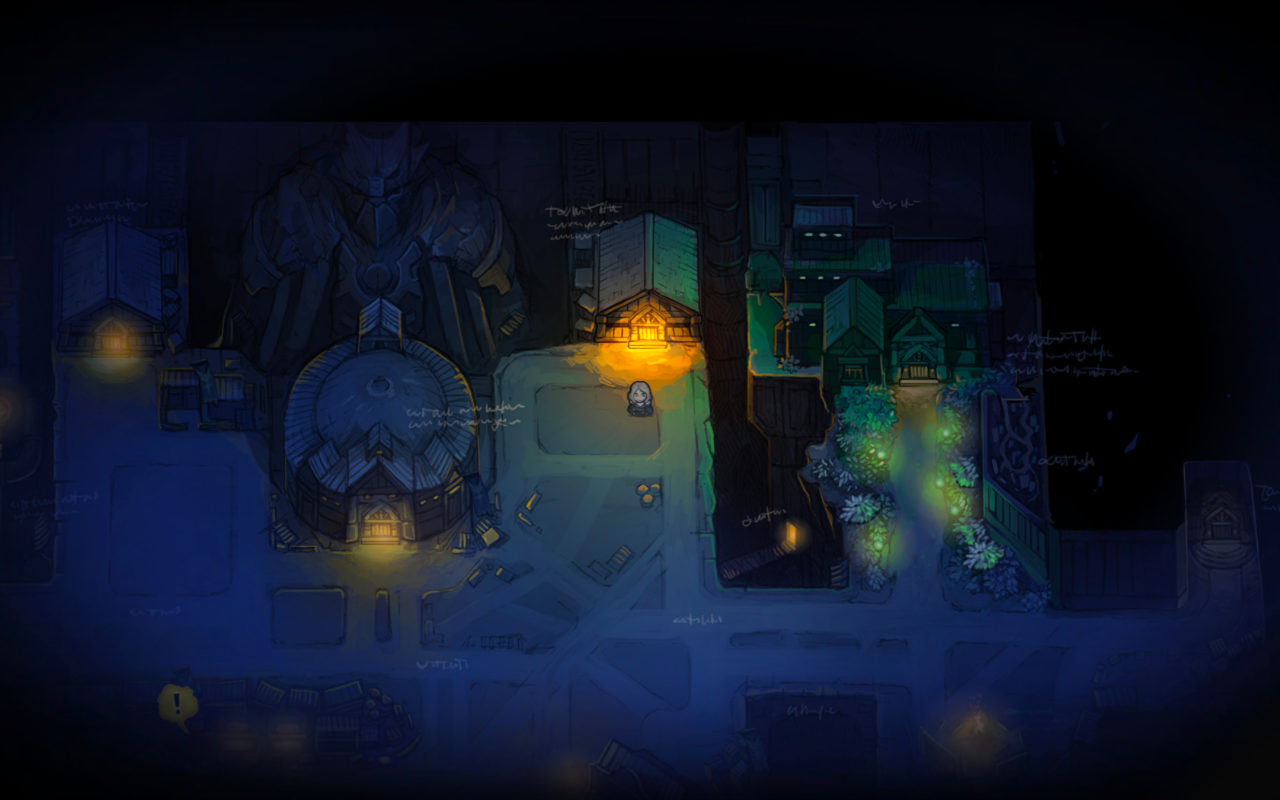 This part is okay at the beginning of the game, but it becomes rather monotonous because Icenaire never really changes or grows. Thankfully, the NPCs themselves are often interesting, and some that you meat early on will become unexpectedly important as the game moves along. The scenery may not change, but your opinions of the citizens surely will.

Now, to push the story along you’ll have to venture to the surface of Icenaire to explore the cursed, connected neighborhoods. This is where things get fun. And complicated. And cruel. Try to follow me on this.

You’re able to recruit three heroes to help you explore, selected from five races and ten classes. You’ll want someone with high defense to stand at the front of your party, a ranged attacker at the rear of your party, and other helpers place to suit your strategy. You’ll also have to figure in each character’s specialties, which I’ll get to later. The heroes never level up, gaining skill enhancements only by the relic you provide them, so you’re free to let them die or to swap them out at any time.

Combat is fought in a 2D line, so you’ll need to make sure your heroes can reach whom you want to hit. Each character has only a couple means of attacks, spells, and/or heal options, the more powerful of which have to be recharged after use. So, when to use what attack becomes key. Beyond that, combat is actually a bit boring due to its repetitive nature and basic options. 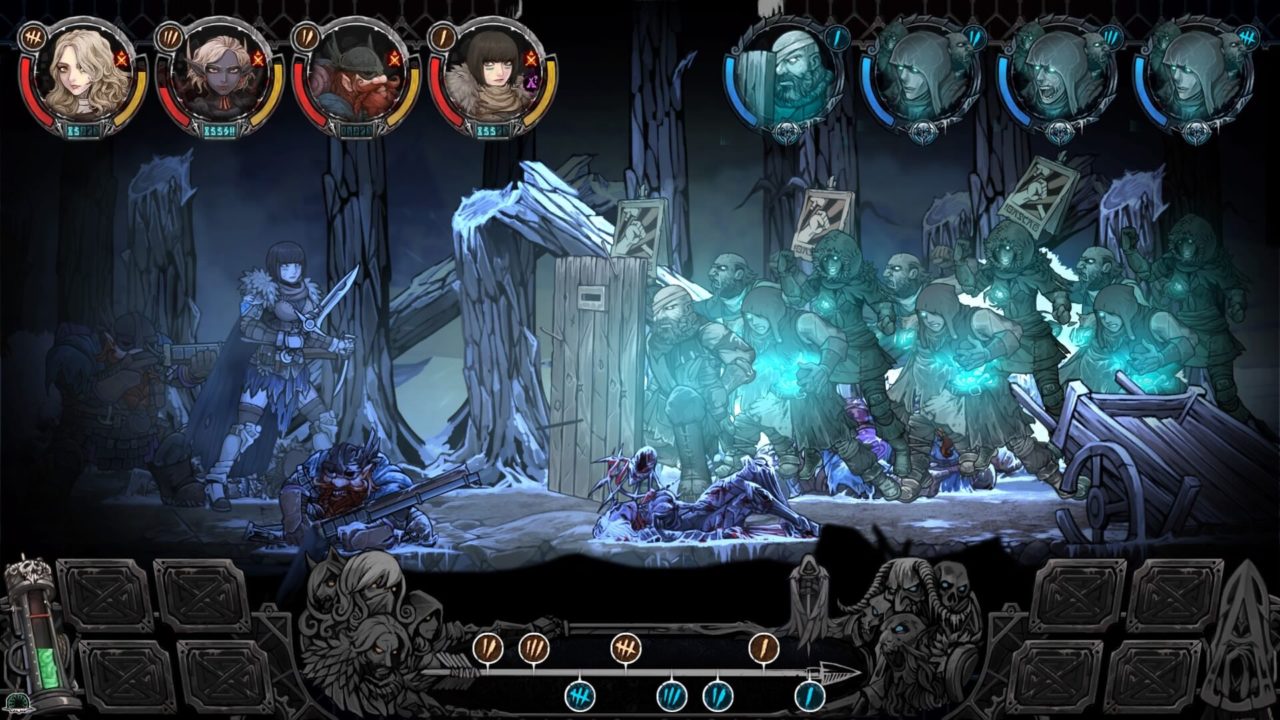 The thing is, though, you’re not just fighting against enemies, you’re also fighting against the environment and your own sanity. Each neighborhood is broken into a set number of locations (buildings or street areas), each of which contains one main event or interaction: a battle to fight, a campsite where you can heal up, a vendor from whom you can buy items, etc. You don’t know which event you’ll get as you walk through a new section, and you don’t have to visit each section in a neighborhood. In fact, you likely won’t want to because things are so brutal here and can go south in a hurry. The map of each neighborhood does a good job of helping you plot your course. 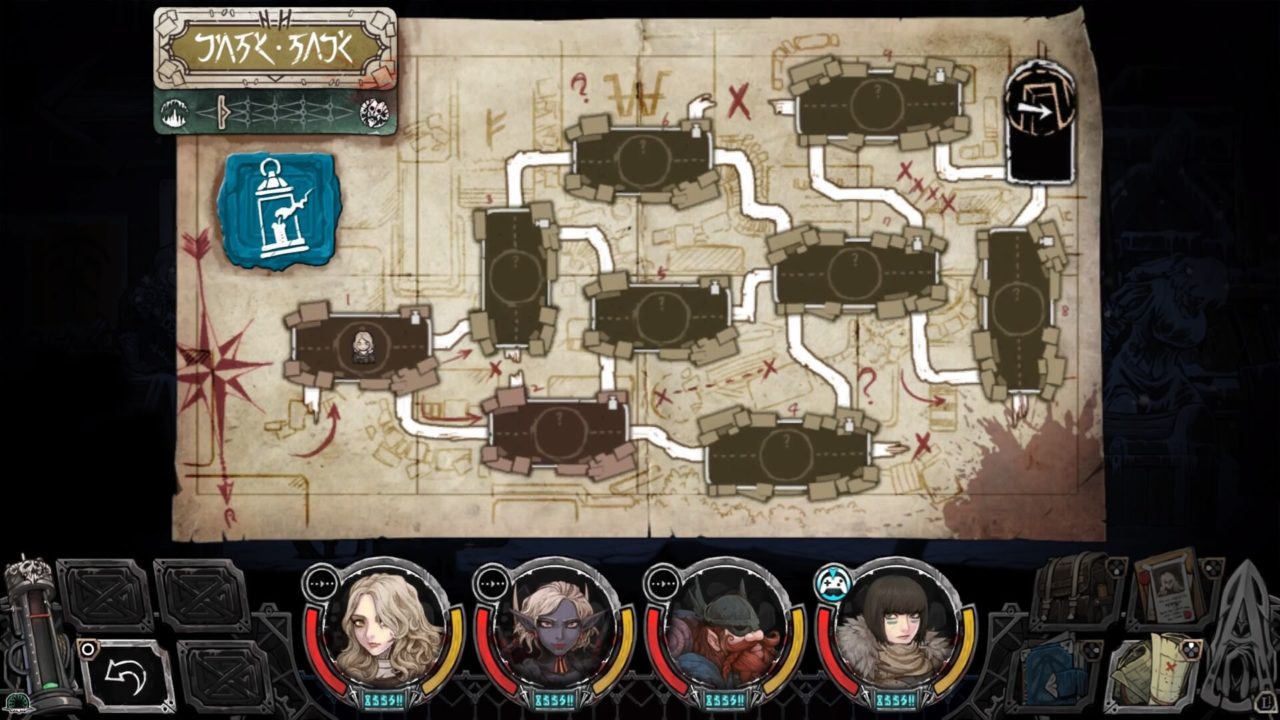 Obviously, you need to worry about your health as you work your way through. If your party members die, they’re gone for good. If you die, you end up back in town. But you also need to maintain your vigor. Running out of this is the same as running out of health, giving you two ways to die and twice as much to maintain. Worse, there are myriad ways to lose both that you simply can’t anticipate. Loot boxes can be booby-trapped. The floor can cave in. That cave you thought might contain loot could instead be cursed. The best you can do is set up your party to counter these effects and then hope you luck into advantageous placement of the randomly generated scenes. Getting a campsite in the first scene, for example, is useless.

At campsites, by the way, you can attempt to restore health and vigor by sleeping or…singing(?), respectively, but they’re not guaranteed to work (this is where your heroes’ specialties can come into play, increasing your chance for success). If they fail, all you’ll end up doing is increasing the terror in your “geist-o-meter.” Did I mention terror? That’s tracked as well, and if it gets too full every section of the neighborhood will have wraiths for you to fight.

Now, you’re able to camp between neighborhoods, at which point your terror level is set back to zero. You can heal up, too, but only if you brought what you need to do so. If not, you can craft some healing items from what you scavenged in the neighborhood, provided you received the right items. Don’t think you can just heal your way out of everything; if you become encumbered your stats will be hit with a severe penalty. And don’t think you can go back home and rest, either, because the neighborhoods are reset if you do. You can keep what you found along the way, but it’s back to the beginning when you’re ready to head back up and continue exploring.

To clear a level/chapter, you’ll have to work through five or six of these neighborhoods and defeat a boss without turning back and without quitting your game because there’s no way to save while you’re exploring. As such, I mostly played Vambrace in short bursts, pushing as far as I could to acquire as much loot as possible, then returning to sell it or craft items. When I actually wanted to complete a full run, I’d start with nothing but health and vigor potions and just hope the obstacles I met along the way weren’t merciless. For the most part, this system kept things flowing. 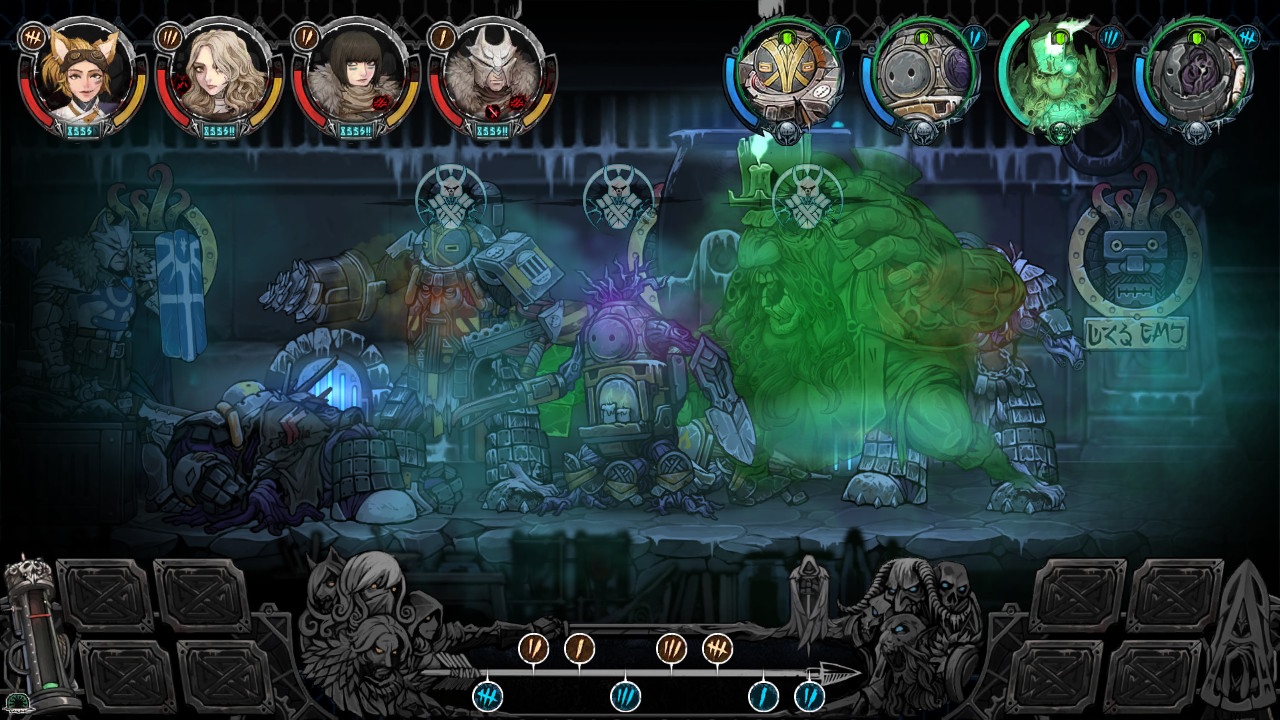 What I couldn’t get into the flow of, however, was the game’s user interface, which is horrible. The controls to handle tasks as simple as moving items from your bag to your chest or to arrange your party order are confusing, and even cycling through the crafting menu is a clumsy mess. You have to use the left stick (no directional button support), you can only move in one direction (down), you have to manually push the stick down each time you want to move (no auto-scroll), and if you accidentally push to the right and select a different menu you’ll have to move back and start all over again at the top. The whole UI is awful. Simply awful.

But the game itself isn’t. It’s difficult, yes. It’s repetitive. It’s often completely unfair. On the other hand, it’s intriguing. It’s very unique visually, with plenty of creepy, animated flourishes that add some flair to the bleak landscape. It’s funny in parts, and the characters are engaging. And as I mentioned earlier, I developed a nice rhythm with it once I decided to approach it in two phases (quick loot gathering vs. longer chapter completion). Also, things do seem to get easier as you progress.

I liked Vambrace: Cold Soul, but it’s certainly not for everyone. It requires more patience than many gamers can afford, and that’s even among those who are already into roguelikes. If you can settle into its groove, however (and won’t lose it when you’re sucker-punched right out of that groove), there’s some good, challenging fun to be had here.