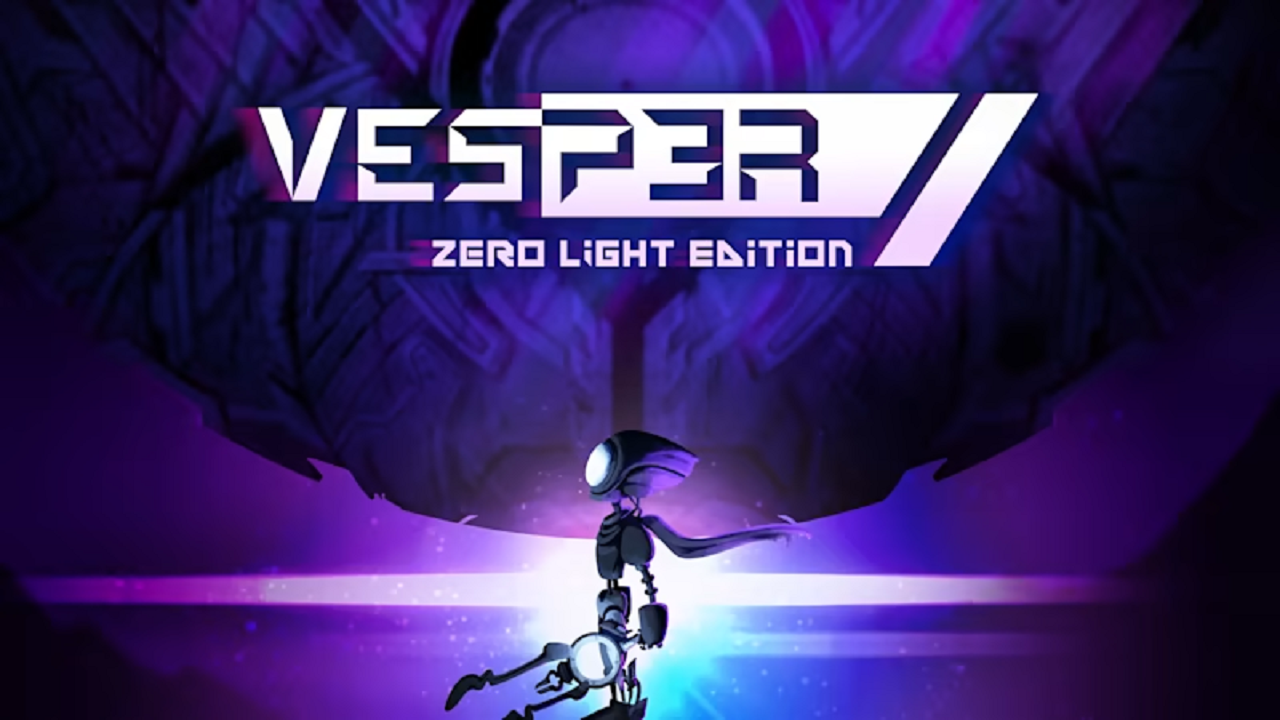 Vesper: Zero Light Edition grabbed me early with its striking presentation but gradually lost me with its time-restricted puzzles. This puzzle platformer has all the right ingredients, but the proportions are peculiar.

The plot has many familiarities, with ancient civilizations and decaying worlds that are relatively commonplace to the genre. What’s interesting about the plot is that you decide how much it factors. Story elements (text only) are found off the beaten path, so play this one straightforwardly, and you may miss most of the tale. It’s a unique approach, but it makes the story feel unimportant. So why do I care about this android I’m controlling?

Well, part of the reason I care stems from the attractive presentation. While the silhouette look isn’t unique, the bold use of color definitely is. Each screen can be dominated by vibrant red, purple, green, etc. It may be garish at times, but it works. With so many games erring on the side of realistic colors, I’m happy to play a game that remembers it’s a game!

What aids the visuals is how the camera can alternate from the typical mid-range view. Close zooms help me feel a bit of attachment to the android that’s otherwise lacking, and I’m able to pick up certain details better. Meanwhile, the zooms out really impress upon you the sense of scope, playing as a small android on an alien planet.

Of course, the gameplay can tilt an okay game into a good or great one. Here is where Vesper: Zero Light Editon leaves me with love/hate feelings. It takes timer-based puzzles, which should be used sparingly, and gets carried away with them. In a world that’s begging to be explored, it forces you to high tail it.

This could’ve worked, except the puzzles don’t always complement this. For example, your main puzzle gimmick is a “Drive Gun,” a sword-looking weapon that allows you to transfer light into enemies and machinery. But it isn’t a consistent process. Sometimes it happens quickly. On other occasions, I’m left wondering why identical-looking machinery takes three times as long to activate. If this occurs when an enemy is near, forget it.

But wait, can’t you control your enemies’ minds with the light? Yes, and these moments are pretty darn fun. But the devs couldn’t resist having enemies respawn, adding a few tablespoons worth of this mechanic when a pinch would’ve sufficed. Thus, this puzzle impact is weakened. Perhaps if the light mechanic wasn’t dependent on control via the Joy-Con sticks, it could’ve worked better, but there’s no option to remap the controls. Really no control options at all, save toggling vibration.

The time stuff offers less of a satisfying challenge and more of a repeated annoyance, especially with the android you control moving on the sluggish side. Worse, I feel the speed focus limits stealth, one ingredient that should’ve been used more. At least the checkpoints are appropriately close, although it’s autosave only.

Thankfully, the developers have wisely sprinkled in passive screens. These are smart for numerous reasons. Besides letting you catch your breath, as it were, they allow you to stop and take in Vesper: Zero Light Edition’s impressive aesthetics. One of my favorite scenes involved running through a little village of other androids. Being limited to the background, I couldn’t interact with them, but I greatly appreciated the pretty eye candy. It also probably left more of a story impression on me than the various texts.

Vesper: Zero Light Edition might’ve needed to stay in the oven a bit longer, but there’s still a decent game here for puzzle platformer fans. The heaviness of the time-based stuff combined with fiddly Switch controls and your slow-moving android eventually takes a toll. But when the puzzle mechanic works unencumbered, it’s clever and satisfying, and the audio/visual package goes a long way. With better balancing, Cordens Interactive should have a hit with their next release.

Vesper: Zero Light Edition might’ve needed to stay in the oven a bit longer, but there’s still a decent game here for puzzle platformer fans. The heaviness of the time-based stuff combined with fiddly Switch controls and your slow-moving android eventually takes a toll. But when the puzzle mechanic works unencumbered, it’s clever and satisfying, and the audio/visual package goes a long way. With better balancing, Cordens Interactive should have a hit with their next release.