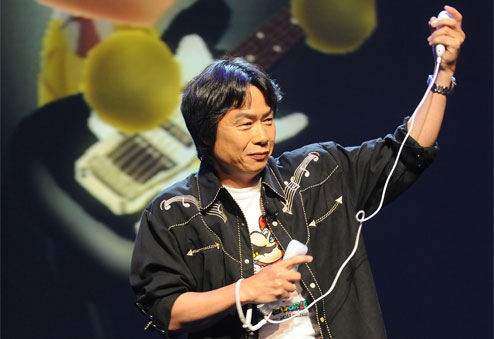 Wii Music is Shigeru Miyamoto’s latest brain child, and the latest title in a series of games developed for a wide-range of players. Like Wii Sports, Wii Play, and Wii Fit, Wii Music is about expanding the definition of a video game and bringing new kinds of interaction using the Wii remote and nunchuk. While the game has received very mixed reviews, I’m going to try and provide some balance and objectivity to my review.

Our first glimpse at Wii Music was in 2006 when Shigeru Miyamoto, dressed in a conductor’s suit, took the stage to unveil the Wii’s software lineup. Wii Music was in its infancy at that time and has really evolved from a simple tech demo, to a game that is simply fun.

Wii Music is unlike any game you’ll ever play, and most would question whether or not it’s a ‘game’ at all. While there are a few minigames that track scores and progress, there really isn’t much that resembles a traditional ‘game’ at first glance. There’s no storyline, hero, damsel in distress, or any bosses. However, you’ll find that Wii Music is probably one of the best examples of a game that delivers exactly what it says it will—a fun, engaging Musical experience. While it doesn’t resemble most ‘traditional’ games, Wii Music carries an inherent sense of fun as soon as you play your first note. 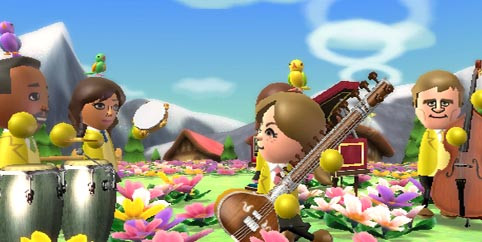 The gameplay for Wii Music is quite simple. You can choose to do a Quick Jam Session or a Custom Jam Session. Quick Jam will automatically choose an instrument, venue, part, and style. Custom Jams allow you to choose from six different parts of a song: 2 Percussion, Rhythm, Chord, Melody, Harmony, and Bass. After you choose a part, you can choose from more than 50 different instruments/noise makers. You can jam with everything from turn-tables to harmonicas and taiko drums. You can choose from about 10 songs to start out with, then eventually unlock more. The song selection is probably the weakest part of Wii Music, but there are definitely some great selections. 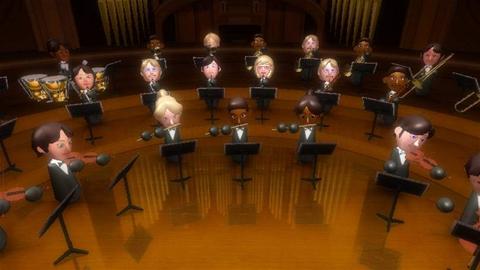 When you get to the stage, you will see all the parts of your band and you’ll have to play your part to match the song. You can use the minus (-) button to bring up a guide for when to play notes for your given part, and I would definitely recommend it for beginners. The guide shows you where to play a note in the measure to make sure it fits with the other parts of the song. So, if you’re playing bass or percussion, you’ll probably only play 1 or 2 notes every 4th beat. As you get more comfortable with the game, you are encouraged to improvise. Now, even though you’re playing the percussion part, you could play along with the melody or add in notes to fit with the beat. A song can really be as simple or as complex as you want. Improvisation is the real key to making compelling songs.

When you finish a song, you are asked if you want to save the video from your performance. My first few songs were pretty bad, so I decided not to save them. But you should make as many videos as possible to unlock more instruments, stages, and get more experience. You can then re-dub parts of your video later and send them to friends over the Nintendo Wifi Connection. Your friends can then change your video and send their version back to you. So there are a lot of cool collaboration aspects to the game. 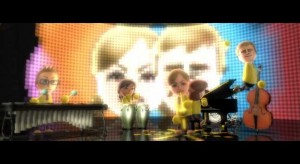 One of the best parts of the game is the multiplayer. The first weekend I had the game, I got together with James and the entire crew and seriously played Wii Music for 4 or 5 hours straight. Most everyone there was skeptical at first, but they were all (myself included) pleasantly surprised at how fun it was. Each player selects a different part for a song, and you’re all trying to play the song correctly. Usually this doesn’t happen, and if one gets off, everyone gets off, and it turns into a competition to see who can mess up the most : ) It’s a lot of fun, and a great way to get people interested in different instruments and styles.

There is a lot more to Wii Music including a few more modes like being a Maestro (like the E3 demo), playing Handbells, and a game called ‘Pitch Perfect’. Wii Music is a pretty complete package and is a lot of fun for all ages.

Visuals: Wii Music is a very visually appealing game that borrows most of its style from Wii Sports. Everything looks very sharp and it features both progressive scan and 16:9 widescreen. The game has a very bright mood and all the stages feature visual effects that coincide with what you’re doing on your instrument(s). For example, trees sprout up on the beach level to the beat, and flowers change colors in the meadow level.

Gameplay: While the gameplay is quite simplistic, it can take some time to master all the instruments and actually produce good sounding music. There are three main control methods: violin, guitar, and trumpet. These represent how to hold the controllers when playing an instrument. Other instruments are self-explanatory like the turn tables–just picture turn tables in front of you and ‘scratch’ using the Wiimote and nunchuk.

Replay Value: With all the multiplayer modes in the game and the ability to share Wii Music videos with friends online, Wii Music will keep you pretty busy during the holidays.
Wii Innovations: The Wii remote and nunchuk are used very well in the game, especially considering you can play 60 very different instruments with just the Wiimote and nunchuk. Wii Motion Plus would’ve been nice for some of the instruments though.

Verdict: Wii Music is not for everyone at first, but I truly believe that once you actually play the game, you’ll find yourself enjoying every minute. Even when you mess up and produce cacophony, it’s still a lot of fun knowing you have complete control of how you want to play a song.