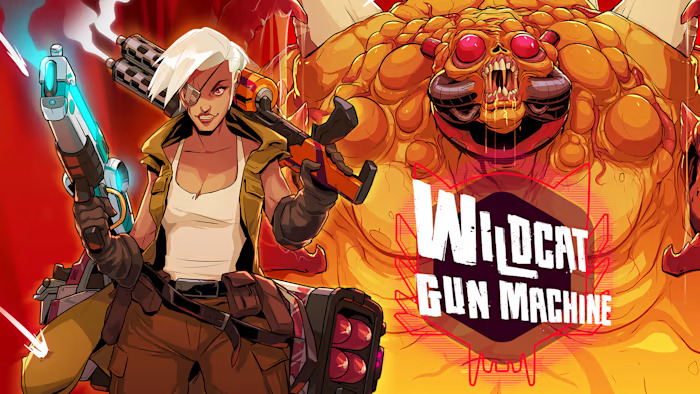 Wildcat Gun Machine is a twin-stick shooter for the Nintendo Switch. It can also be filed neatly under the “bullet hell” category since this is a game that throws everything at you. From everywhere. All at once. In short, if you’re looking for a challenging shooter, this provides exactly what you need.

Typical of many games in this genre, there’s no story to speak of. From the environments, I assume you’re some kind of female bounty hunter gunning down horrible-looking aliens on board a spacecraft. It doesn’t overly matter; the gameplay ensures you’re kept on your toes the whole time, with little room for narrative. 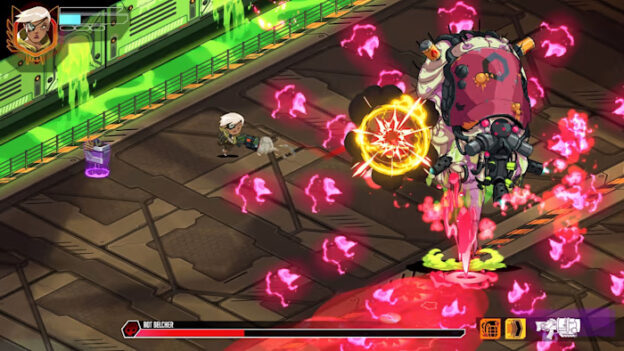 As a twin-stick shooter, the controls almost speak for themselves: control the character with one stick and the gun with the other. Then fire repeatedly at everything on screen. There’s an exploratory element at play as well. Each of the game’s four chapters opens with a small area surrounded by several locked sections. As you reach the end of each area, a boss fight will allow access to the next section.

The aesthetics are great. Wildcat Gun Machine presents a colorful isometric view of the world, with beasts of all shapes and sizes. Your character’s sprite has a cartoony feel to it, complete with a large head. She uses a cat power to respawn – it sounds stranger than it is – which is where the game gets at least part of its name. The rest of the title relies on the huge variety of weaponry. 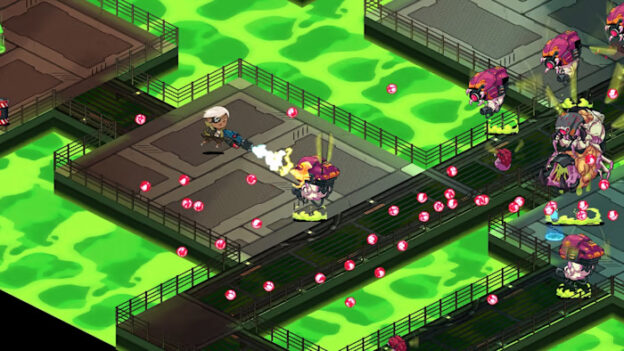 Oh yes, you’ll unlock plenty of hand cannons on your journey to free the universe (or whatever our mission actually is). Each new gun is stronger and more interesting-looking than the last. They also differ in speed and damage, so you can find that sweet spot that works for you. You can assign two blasters at a time, one standard and one special. Standard weapons come with limitless ammo, allowing you to shoot to your heart’s content. Special weapons might be stronger, but they have a limited supply of ammo. Thankfully, refills are dotted around the place, because you’ll need them.

The enemies are grotesque, to say the least. They come in all shapes and sizes, often looking like something from a hardcore metal video: think flaming skulls, spewing green gargoyles, and other monstrosities. They’re in plentiful supply and they’re not afraid to shoot at you. Or explode near you. Or spew on you. Ewww. 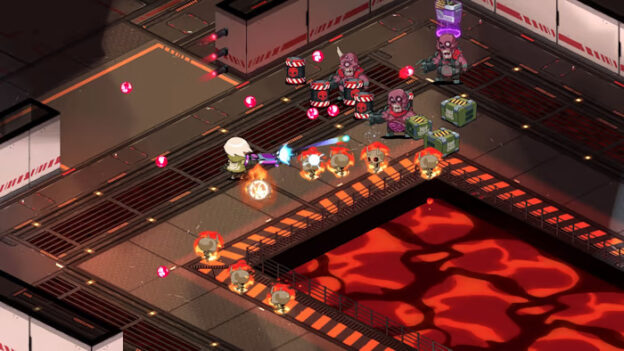 Speaking of metal, the soundtrack takes its cues from this visual tone with some nice guitar elements and mashes it with an industrial vibe, giving it an eerie, fast-paced sci-fi feel that keeps the adrenaline pumping. It fits with the visuals well, though it is a little repetitive at times.

Overall, Wildcat Gun Machine is an addictive and incredibly difficult shooter. The vast variety of weapons and the exploratory element keep it interesting. If you’re looking for a challenge, you’ll certainly find it here.

Wildcat Gun Machine is an addictive and incredibly difficult shooter. The vast variety of weapons and the exploratory element keep it interesting. If you’re looking for a challenge, you’ll certainly find it here.