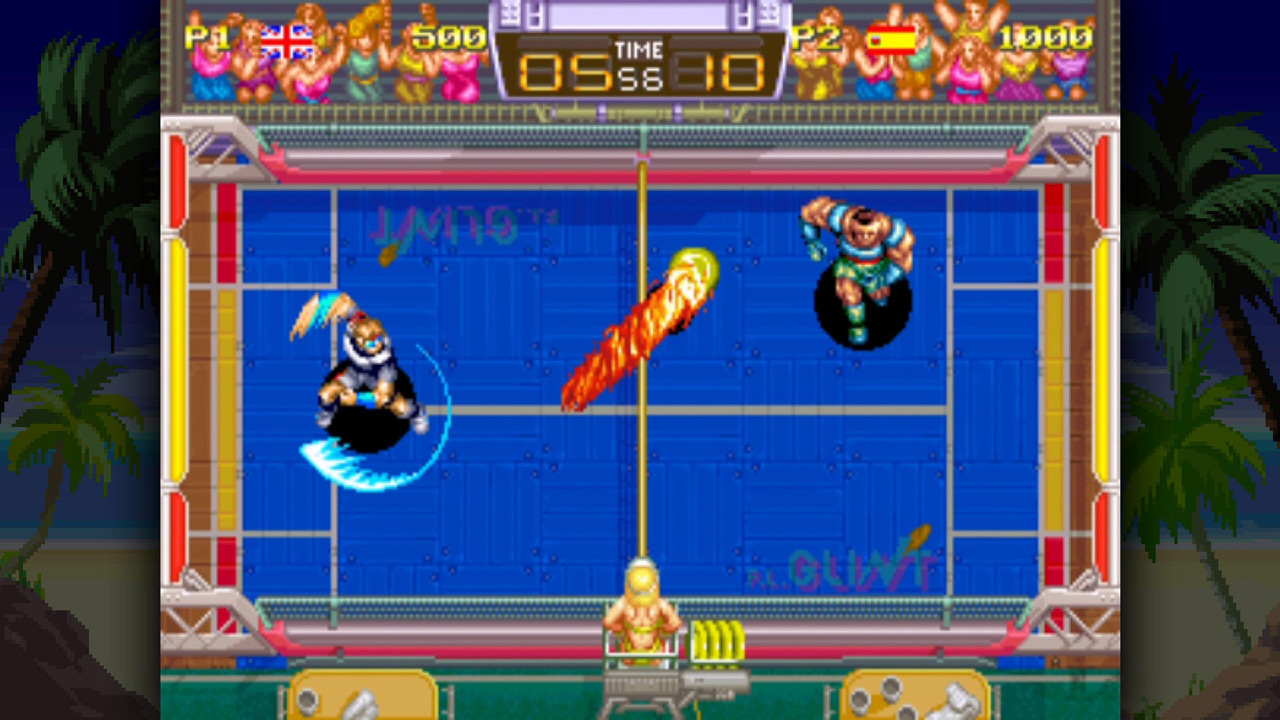 Windjammers brings some unique sports action to the Nintendo Switch. It previously made a brief appearance on the Wii Virtual Console, but only in Japan. Think of the game like playing air hockey, but with humans as the paddles and a Frisbee for the puck. If that sounds fun (and it is) Windjammers deserves a look for local multiplayer fans.

Which isn’t to say there’s nothing here for the solo player. I’ve played quite a bit against the computer. There are six characters (light, medium, and heavy) and speed and power vary among them accordingly. I would’ve liked to see a few more. Medium difficulty offers a solid challenge, but first-time players might consider starting on easy. Hard difficulty is for once you really get the sense of the controls and timing, which comes with practice.

Being an arcade game, the rounds are brisk. Depending on where your Frisbee crosses the goal on the playing field you’ll get three or five points. So if your aim is gone, a game could end in as few as three scores. The arcade roots are also reflected in the controls, which adopt some ‘90s arcade fighting moves. If you have muscle memory to throw a fireball in Street Fighter II, you’ll find some nice rotation on your throws, even if the Joy-Con isn’t the best for pulling these off. 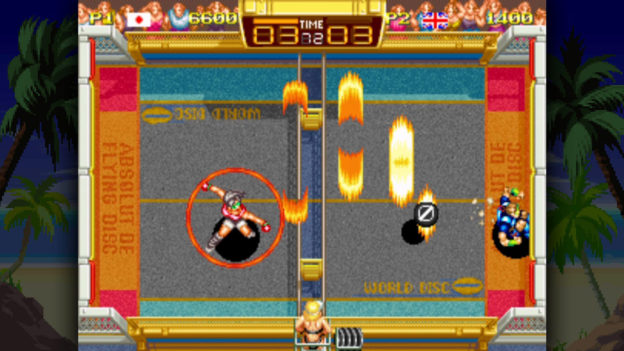 Despite the overall briskness, the clock is a factor. If nobody can reach 12 or more points before it runs out, whoever is in the lead takes that round. Should the game be tied when the clock expires, it’s sudden death. Even then, the clock remains, and you might wind up with an unsatisfying draw.

As I mentioned at the start, multiplayer is where Windjammers is strongest. Get a friend who likes the game, and you’re certain to have some fun, local competition. The game offers online as well, but no matter the day or time I try, I’ve yet to find a single player online. At least the leaderboards work, which is good for the time when you don’t have a friend to enjoy the game with and want to challenge yourself.

With online factoring very little, what else is here that wasn’t around in 1994? HD Menus, filter and ratio picks, some nice background choices, and original or Neo Geo CD music. The two mini-games are also available from the start, and they offer their own leaderboards. 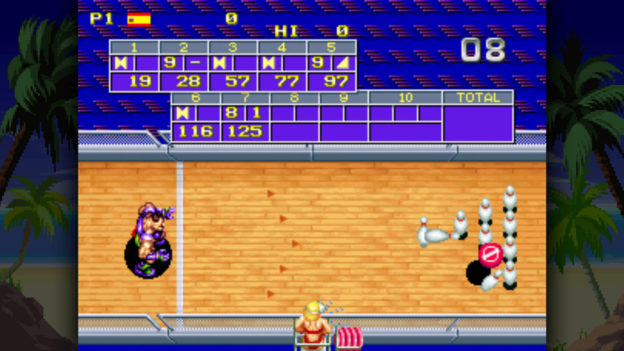 Windjammers was a quiet release when first unveiled by Data East. Even this DotEmu Switch version is a bit quiet, as shown by the sheer lack of an online presence. Perhaps there was some right at launch? I apologize for missing this game initially, as our review code was buried at the bottom of a forwarded press release that I nearly deleted. I hope the game finds some legs, and perhaps it will pick up when the sequel arrives on Switch next year.

Calling Windjammers “The most entertaining sports game ever made” is quite a stretch, but this is a very fun game. That said, this Neo Geo port is $14.99 on Nintendo Switch, and if you manage to find any online competition you’ve succeeded where I have not. So bookmark this one, but for a future sale. 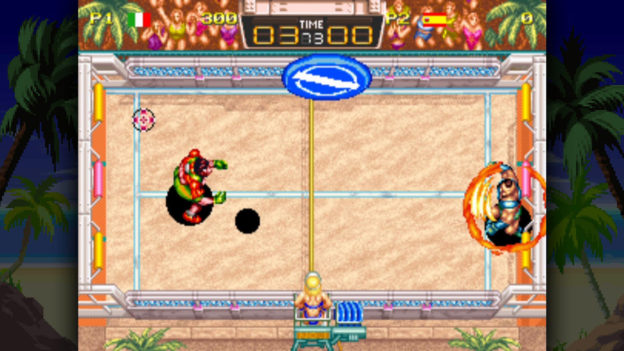 Calling Windjammers “The most entertaining sports game ever made” is quite a stretch, but this is a very fun game. That said, this Neo Geo port is $14.99 on Nintendo Switch, and if you manage to find any online competition you’ve succeeded where I have not. So bookmark this one, but for a future sale.