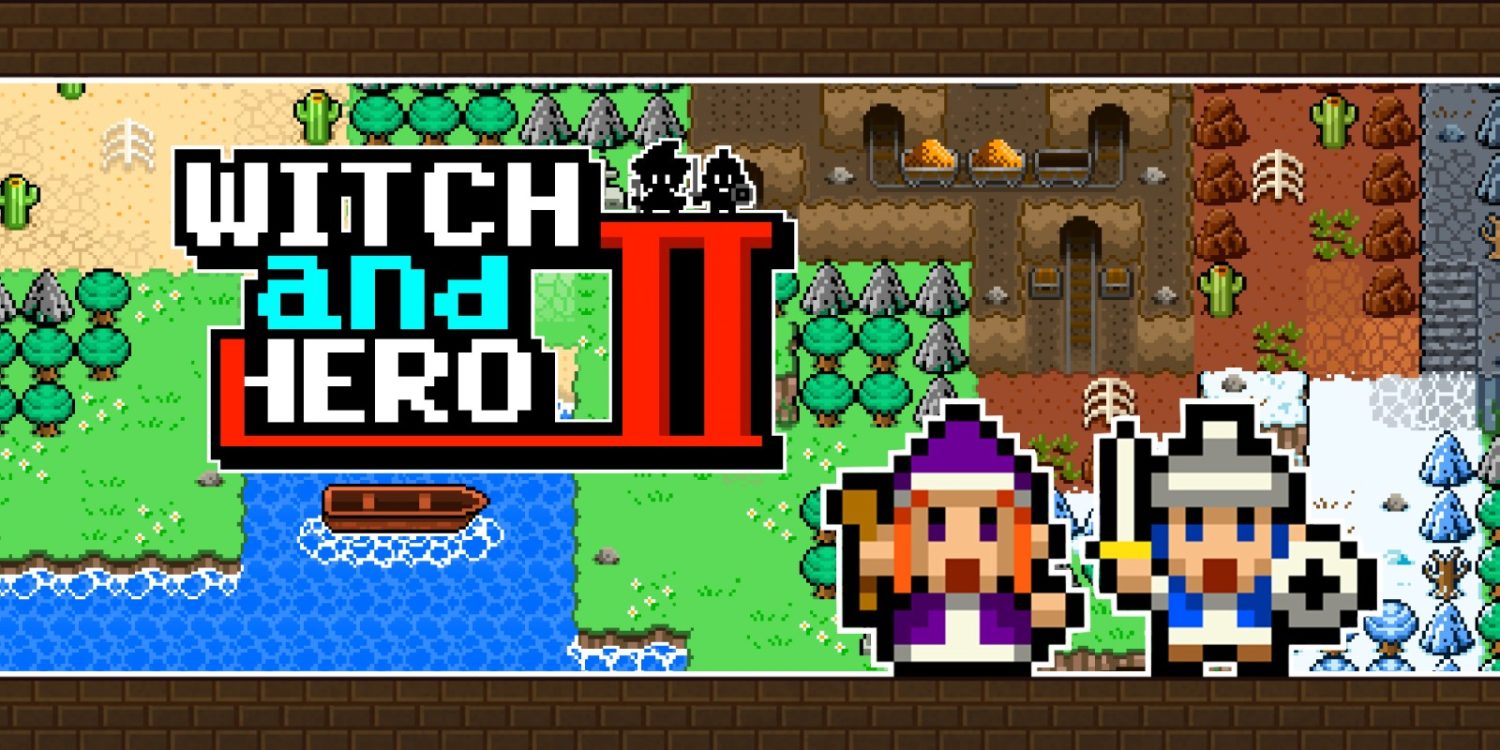 Witch & Hero 2 is an arcade-style beat ‘em up in which you control two characters at once, attached to the individual analog sticks when in single-player mode, with a cooperative mode available as well. As you bounce your knight against the incoming onslaught of enemies with infinite lives, you must defend the feebler witch to your last breath in order to progress to the next level. With the witch offering strong magical abilities, you will have to balance using them in combat when your knight has fallen or is getting overwhelmed. Featuring an 8-bit graphical style and simplistic controls, this little title is low on depth and interesting mechanics, and with the later levels showing innumerable hordes, chaos and nonsensical action ensues.

Simplicity is something Witch & Hero 2 goes for across the board. The story consists of this tag-team conquering duo wanting to defeat the Demon Lord who has forsaken this war-torn land. That sums up this tale from start to finish, and it isn’t really mentioned again throughout. This is an arcade experience, through and through, and thus gameplay takes precedence.

After selecting your stage, you will be presented with an open field, sometimes in various locales, where your two characters are waiting patiently for the fight to begin. As enemies move into the screen from the outer edges, you will begin chopping them down limb from limb. Defeating all the enemies on the screen isn’t necessary, you just have to survive long enough to defeat the eventual boss spawn, so this becomes a bit of a survival-esque waiting game as they slowly waddle into the field of battle.

Cooperative mode is fun, but the strategy is the same, even if it is a bit easier. In the single-player mode, you are forced to control both characters simultaneously with each attached to an analog stick. There is no attack button, or abilities at all, outside of the witch’s magical spells. Thus, you will be literally bumping the knight into enemies to cause an attack, where you take a slice of damage in retaliation for each hit. The only interesting mechanic present here is the fact you get an increase of damage from attacking from behind, usually one-hitting most baddies. This means your knight will survive longer before needing a respawn, so it becomes the preferred method, especially in the later levels where it is crucial to stay standing as long as possible. Because of this, instead of being the witch’s shield, you will be forced to use them as bait in order to get behind packs of enemies to get a’slicin’. Otherwise, the knight character will regularly fall too quickly, forcing the witch to get overwhelmed into a game over.

The witch can similarly attack enemies with a bump, but really only gets useful with magical abilities. Blood is dropped by enemies, which when collected by the witch, allow for their spells to be unleashed. So, the knight becomes, not only the protector and back-stabbing attacker, but is also a little errand boy. This means the knight is given way too much to do, at all times, whereas the only real thing the witch is there for is to be a reason to lose the match while sitting around waiting to unleash these powerful spells. What gets even more unfortunate is the fact that in later stages when the crowds get overwhelming, you will be forced to supply the witch, or constantly lose. However, since you must play behind the walls of enemies in order to be efficient, it is a total pain to get back to the witch.

Upgrades are essential to being able to last longer with each run, making this a roguelite of sorts. As you collect coins from downed monsters, you can purchase upgrades to attack, defense, spells, and more, in order to continue progression. It’s, again, a super simple system, but it means you will be replaying levels a few more times than normal, as you will also be doing some farming from lower levels to get upgrades.

Overall, Witch & Hero 2 doesn’t offer a lot for those looking for more than what you could find in a cabinet in some dusty, decrepit arcade. The only really positive trait is that this title takes its mechanics and goes all out for them, even if those mechanics are at odds with each other at times. Simplicity, matched with a clear direction, makes for something I think the gameplay-is-king crowd will find some solace in, but it’s lacking in most areas.

Witch & Hero 2 has a great formula. Simplicity throughout, understandable mechanics, and a quick, in-and-out gameplay loop. However, the title lacks in nearly every department across the board, with some mechanics standing at odds with one another, and gameplay that doesn’t hold up long-term.