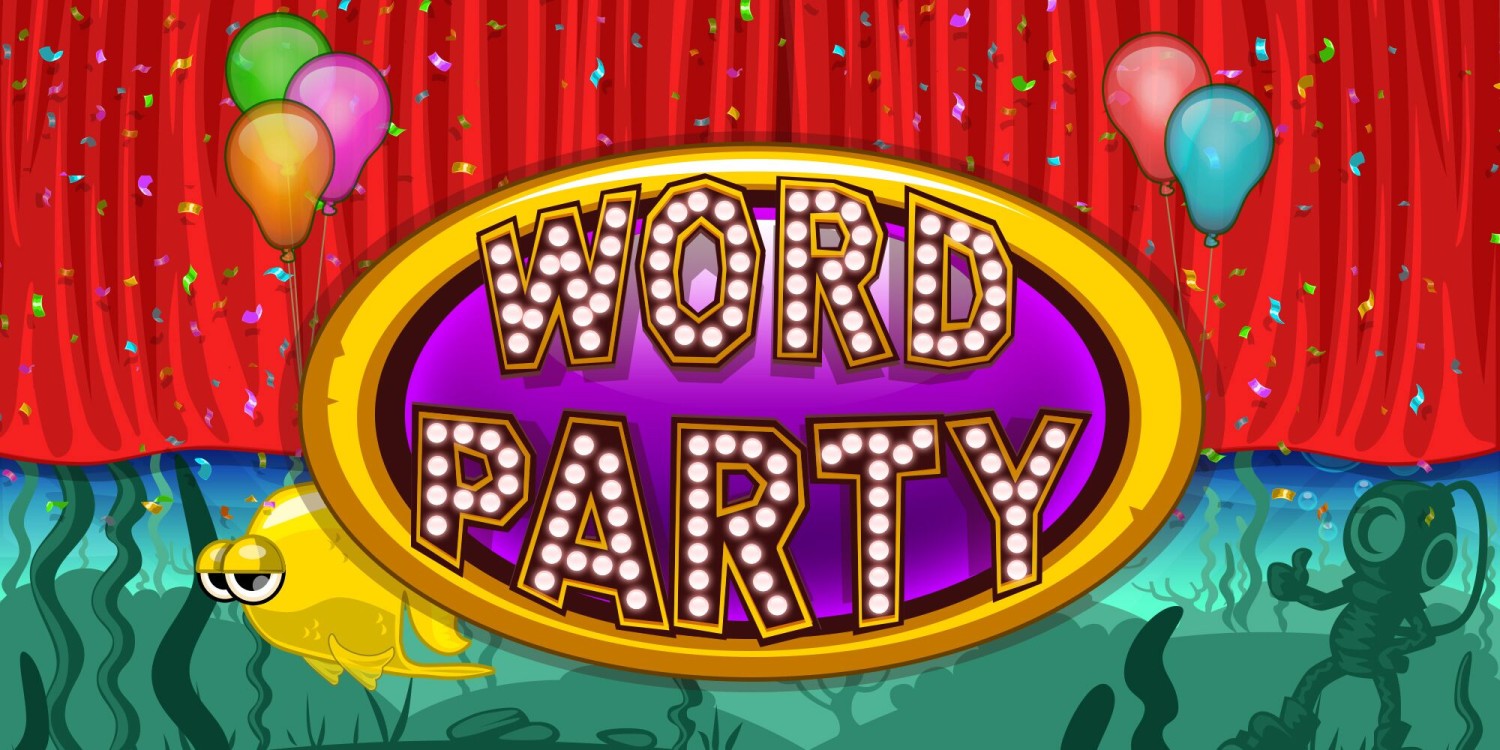 Lightwood Games has a TON of puzzle inspired eShop games. Almost all of them having to do with words in some way. Word Party for the Wii U is their newest installment. It’s a bit more interesting than most of their games that I’ve played, but I’m not sure if “party” is the right word for it. It’s more like “a small get together with a few friends”. Which can actually be more fun than an full blown party, sometimes. 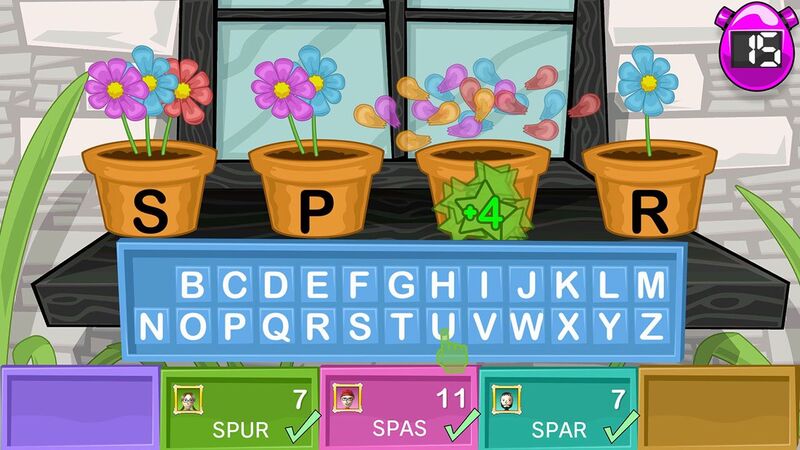 Word Party is fairly cheaply looking but it has some good, fun qualities. Right from the start you can choose from a variety of mini games. All of which are multiplayer. You can play alone but this is definitely a game that’s better with more people so keep that in mind. Up to to five people can join in, using the Wii remotes and WiiU Gamepad. The Gamepad user will have a slight advantage since they have their own screen, so make sure you call dibs on that before anyone else ;).

Instead of focusing only on seek and find puzzles, like most of Lightwoods titles. you’re able to choose from an assortment of educational, yet entertaining mini games. A few of the mini games are actually quite addictive. They’re simple enough to understand so almost anyone can enjoy it, young or old. As long as you can read of course. Here are just a few examples of the 28 mini games you’re able to play in Word Party.

Say “R”: When the teeth open, make words by adding the letter “R” in front of their letters. 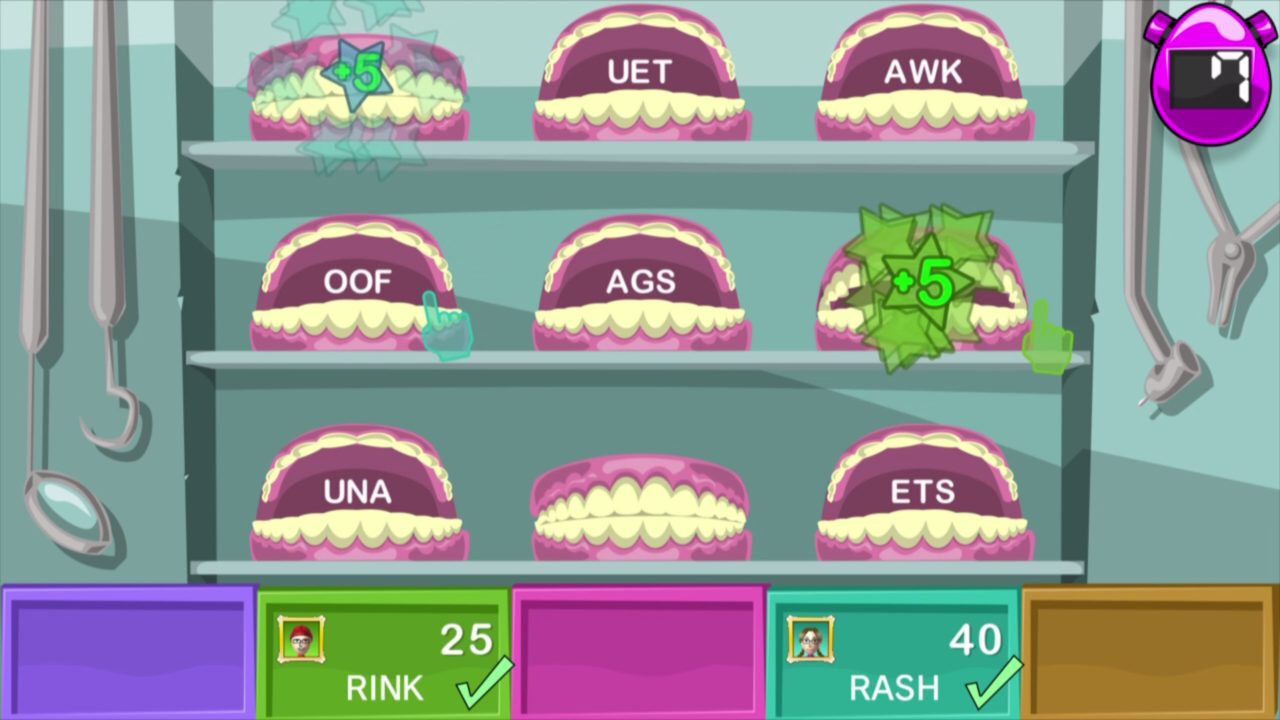 Go Fish: Catch the fish which make words when you add the letters “SH” to them. 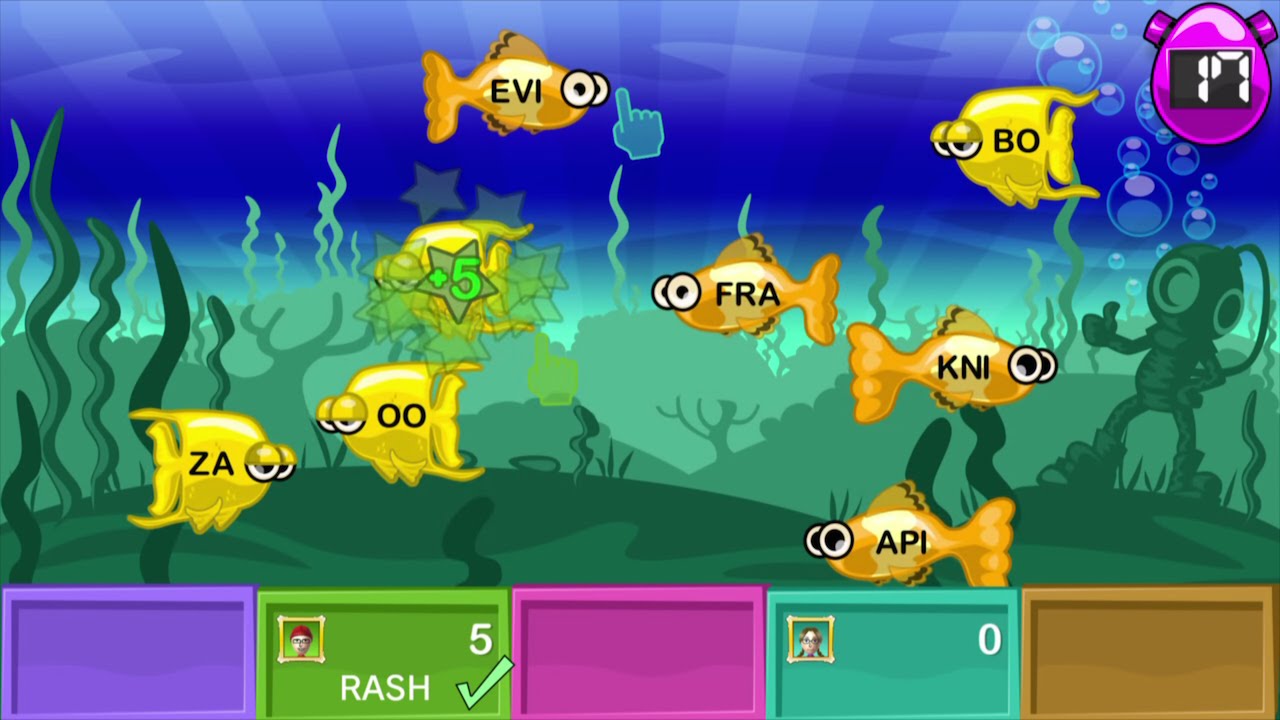 Give Ps a Chance: All you have to do is select each letter “P” in the sentence, but you can’t go back if you miss one! 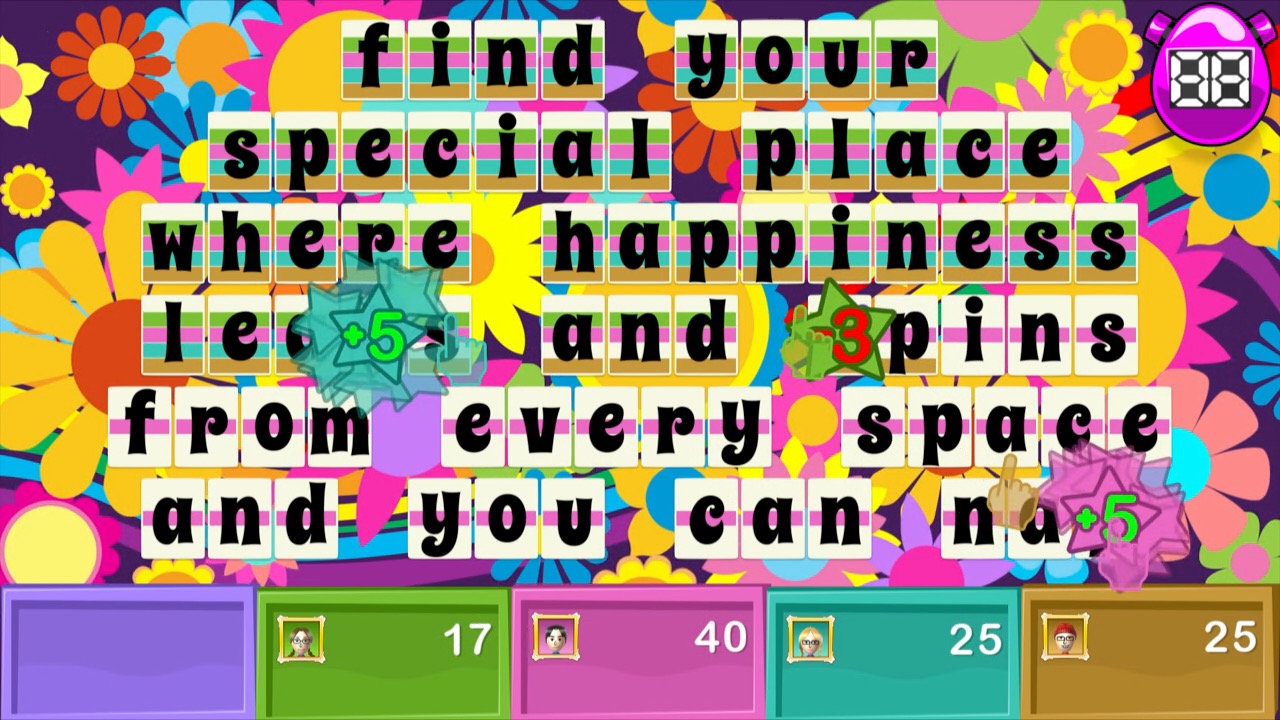 Here’s my one big complaint with Word Party. Each mini game you play has a pretty quick timer. This adds to the challenge but it’s also very frustrating. When your game ends you can view your score and then you’re taken back to the menu. Sometimes I just wanted to replay the same game. But having to continuously go back to the menu, choose the game and read the instructions over and over, I just felt a little annoyed with it all. 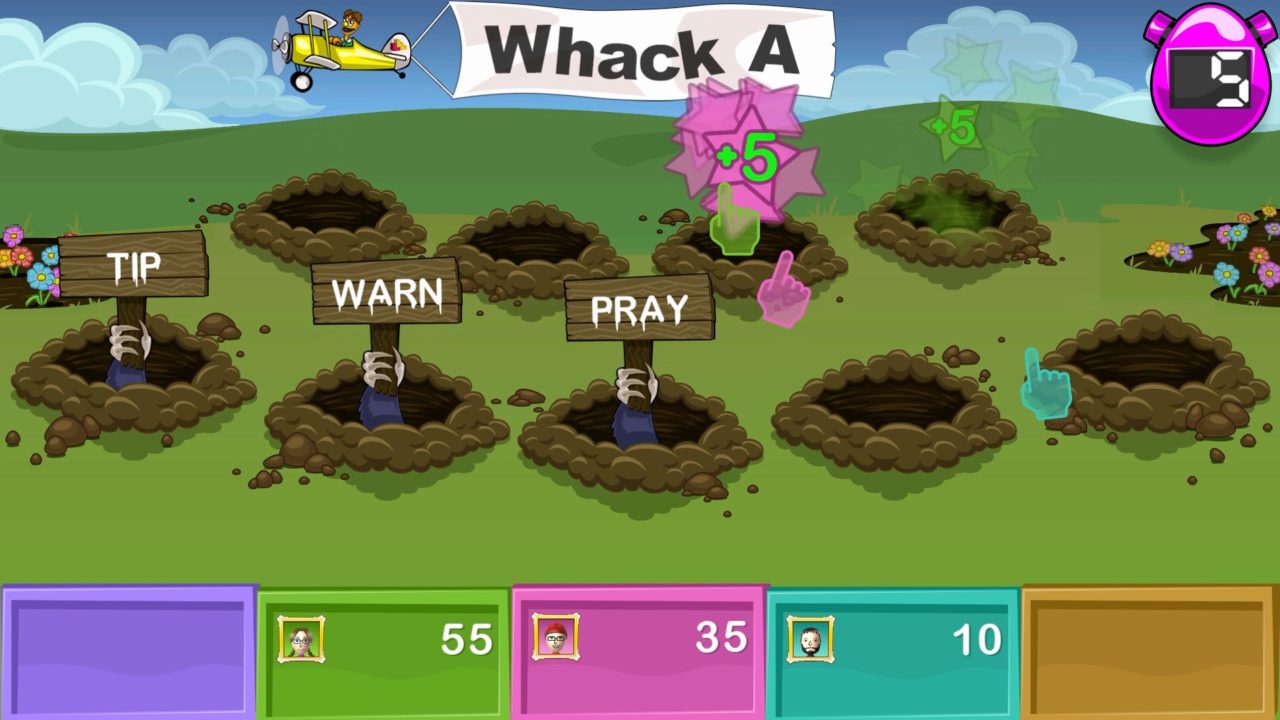 The graphics are a little “kiddish” in my opinion, maybe kid friendly would be a better word. I’m not saying I want fire breathing dragons or crazy detailed background scenes but the bumblebees and cutesy goldfish didn’t add to the excitement. Most of the mini games do have different background music so you won’t have to listen to the same thing all the time, which was nice. 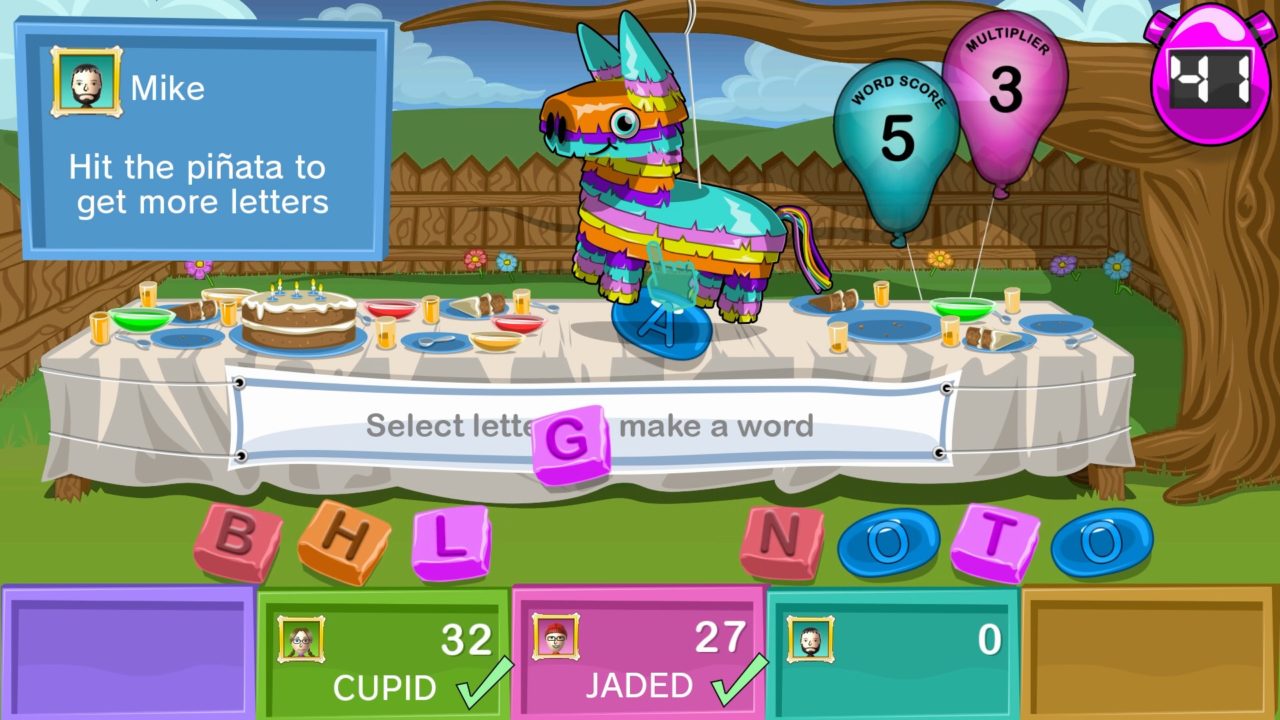 Word Party is a good attempt at a fun party game but I feel like it’s missing something. Maybe I’ve played too many Wario Ware games but I feel like I’d enjoy it more if it had that type of fast paced continuous gameplay, without having to stop and pick another game every 30-60 seconds. Also it needs just a little more pizazz to keep me interested. After a while it feels like you’re playing the same game over and over again. 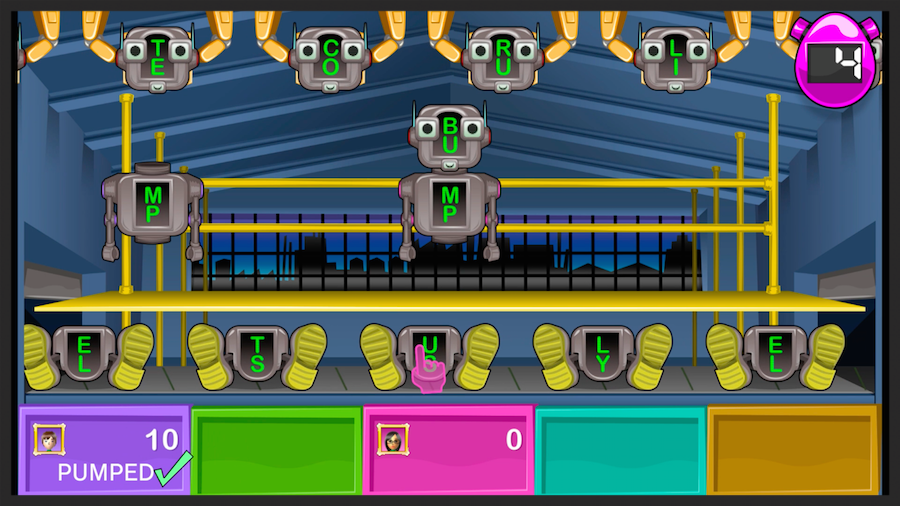 Word Party will probably appeal more to the younger gamers out there but that isn’t a bad thing. A fun educational endeavor never hurt anyone. Still if you’re a fan of word games and your tired of the old seek and find thing, I recommend trying this out, regardless of age. But I also HIGHLY recommend waiting for a discounted price, as I do not think Word Party is worth anywhere near its $19.99 price tag. While I did enjoy it in small bursts I don’t think $20 is fair considering titles like PUNCH OUT! and Super Mario Galaxy 2 are the same price.

Where's the Party At?

Word Party is a simple word/puzzle game that you can play with up to 5 people using Wiimotes and the WiiU Gamepad. Go against each other in 28 different mini games, all involving WORDS! Not exactly what you’d expect at a party, but it could be worse…