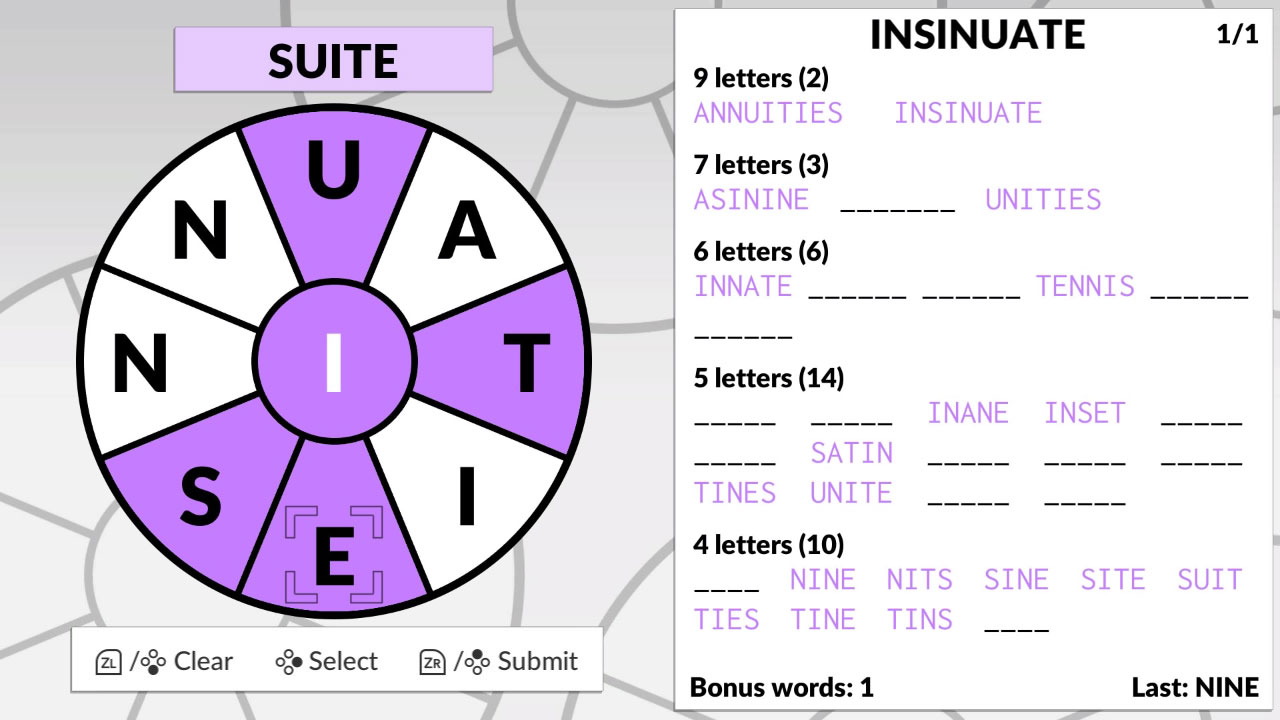 As is often the case with puzzle games, Word Wheel by POWGI is incredibly simple and yet very addictive.

If you’ve ever played a Word Wheel game on an app or in a puzzle book or the back of a newspaper, you already know the rules. The transition to the Switch has not made much of an impact on the general gameplay.

You are presented with a wheel of letters. You have to find as many words as you can make out of those letters and every word must contain the letter in the middle of the circle. The instructions are presented clearly and are easy to skip for anyone who has done this sort of thing before.

The game contains 100 wheels, each with dozens – sometimes hundreds – of words hidden within them, so there’s quite a lot of content for a fairly inexpensive game. 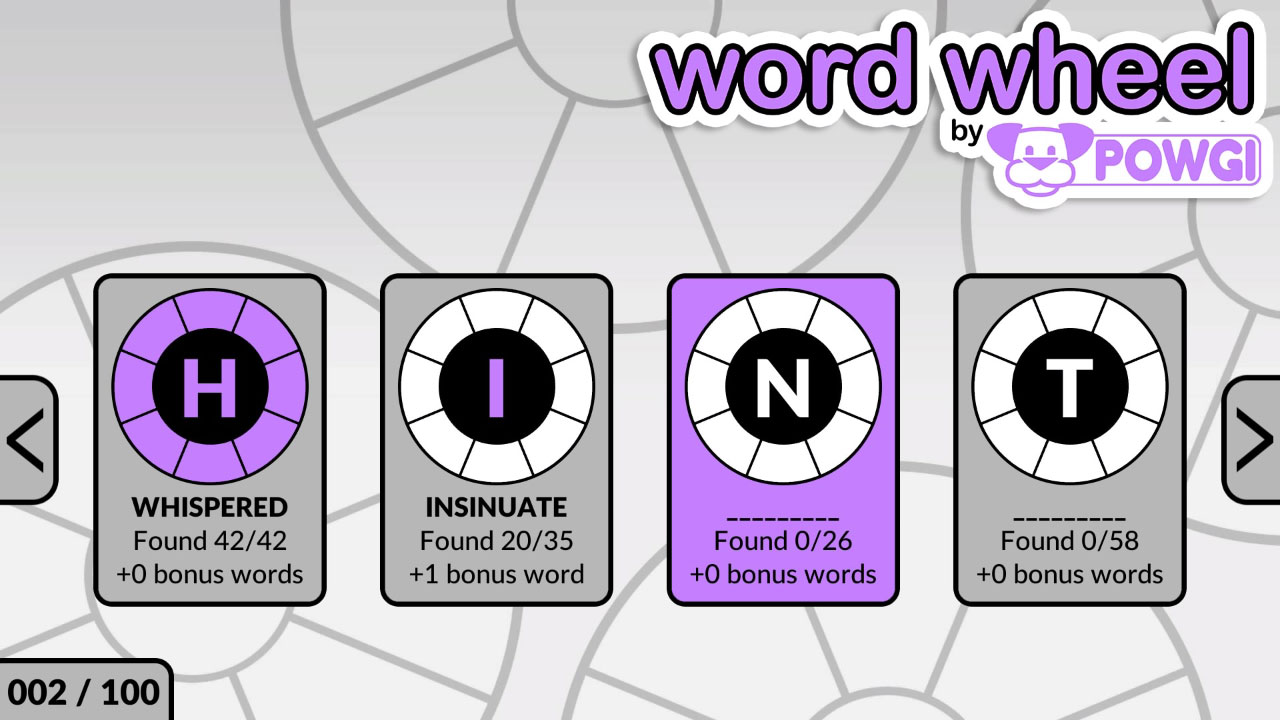 The words you find are noted along one side of the screen so you can keep track of how well you’re doing and how far you have left to go. They’re also listed in alphabetical order, which almost acts as a clue for which words you might have missed.

Word Wheel by POWGI doesn’t offer much else in the way of hints and tips though, so it really does test your knowledge of obscure words.

Each time you find all the words for a wheel, you are rewarded with a joke. These are Christmas-cracker style puns related to the 9-letter word of each level.

You can also find bonus words, which aren’t recorded among the total number of words you have to find, but are noted as a win. These are usually less common words that the creators presumably didn’t expect people to get. They are sometimes also rude words, which anyone playing as a family might not want to write down around their kids. For instance, you’ll get a bonus nod for guessing the word ‘penis’, but won’t be penalised if you choose to avoid it.

Word Wheel by POWGI in this digital form offers competitive and co-op modes, in which up to four players using different joy cons can find words separately. The multiplayer option adds an extra layer to such a simple game and, if you have the right friends to play with, is great fun. 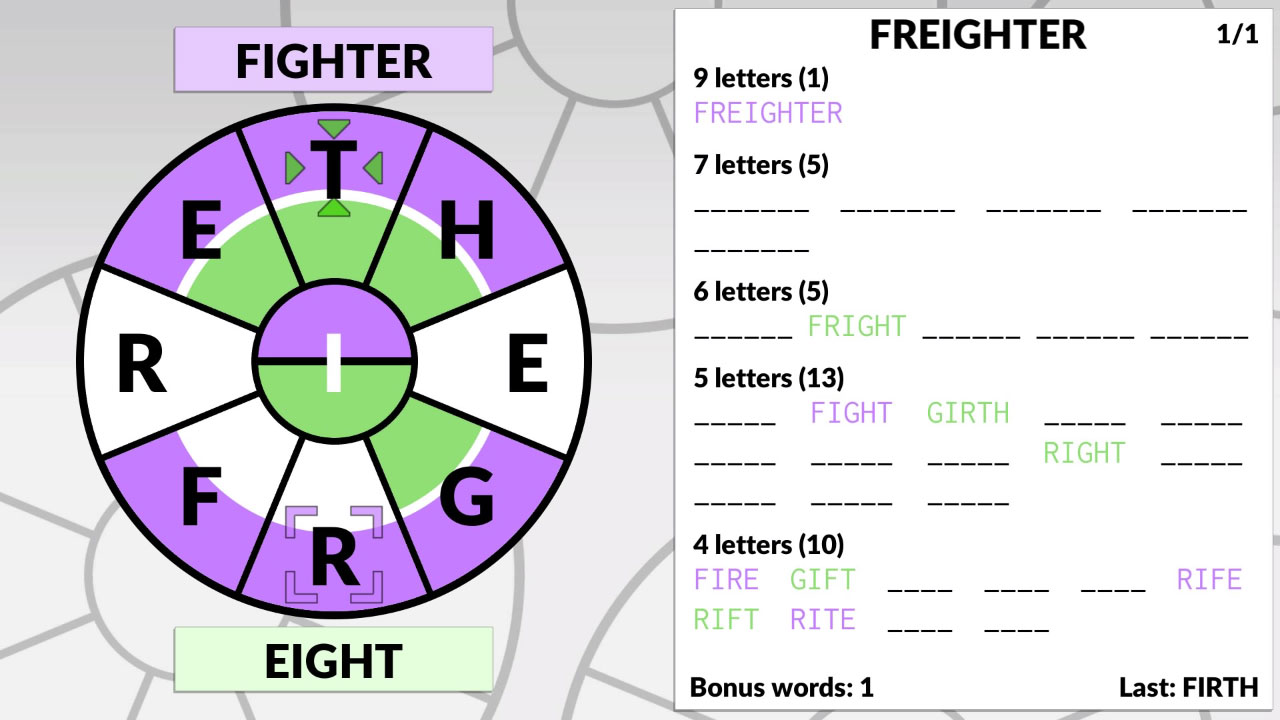 The soundtrack is fairly soothing. The same small handful of tracks on loop get repetitive, though, if you’re the kind of person who can lose an afternoon in a series of puzzles.

The controls are simple enough. If you’re playing in handheld mode, the touchscreen covers everything. If you’re using the joycons, the cursor doesn’t always like going to the letter to the diagonal of the centre, but it’s not hard to just be careful where you click.

Word Wheel by POWGI is neat and clean to look at, and built in a way that seems to have grasped the typically soothing nature of puzzles.

Word Wheel by POWGI is simple and effective and does pretty much exactly what you’d expect a digital version of a pencil-and-paper puzzle game to do.