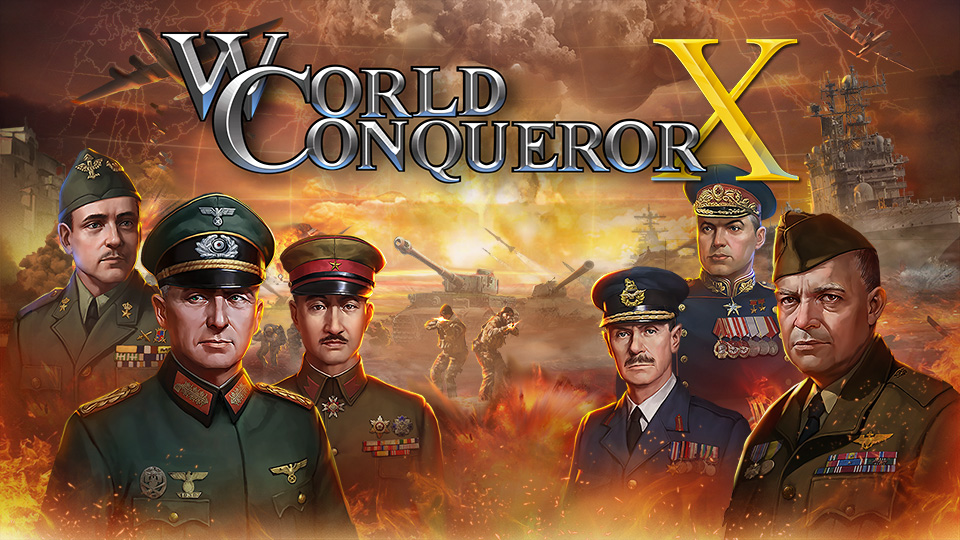 World Conqueror X is the latest strategy game by EasyTech, each mission is based upon the events of World War II. This allows for more intrigue and the ability to learn a little history along the way.

World Conqueror X has a variety of stages in three main modes: Scenario Mode which includes 40 main stages between Axis missions and Allied missions with important battles from World War II in Europe and the Pacific. There is also Conquest Mode, where you choose to start in 1939 or 1943 in the country of your choice and you strategically take over the rest of the world.

Each battle plays the same, yet each outcome and goal is very different from the last. In each battle you control a range of troops and military units in turn-based strategy. You may have many troops on your side but only control about six of them whereas you have to put your trust in the CPUs and hope they help you win.

The battles are in-depth and your turn can take a lot of time. You must make sure your troops are where they are needed while you think of upgrades. Battles can be on land with troops and tanks. You control cities (and take over enemy cities) where you can build airports, nuclear plants, gain more troops, and more. Through that you can take the battle to the air sending paratroopers to a certain point on the map, bomb certain areas, and send out missiles. You can also take it to the sea as well, your dock being similar to your cities where you can build submarines and the like. 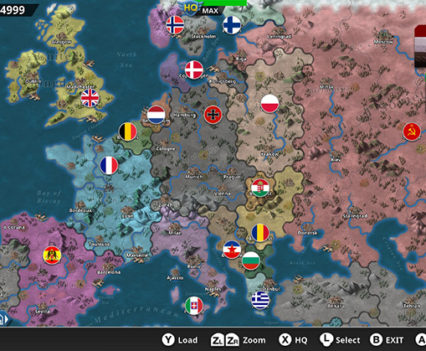 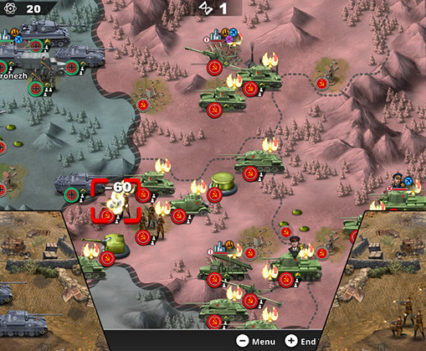 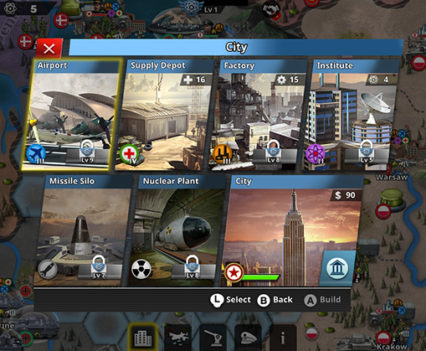 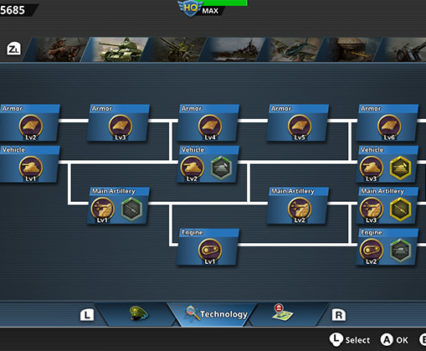 This is all easy enough to do with smooth controls. You can move your cursor and make choices with the analog-stick and the A-button. You can press the Y-button to see the functions and check out what you can build in your cities. The minus-button opens the menu where you can see your resources such as money and how many turns your have left while the plus-button ends your turn. The controls are always at the bottom right of the screen, which was nice.

As you go along, the missions get a little more difficult. The maps can be huge, especially the map in Conquest Mode, making it hard to keep track of what’s going on where. It’s a lot to remember sometimes.

You can 1-, 2-, or 3-star missions respectively depending on how quickly you beat each one. Of course, if you reach the turn limit for a 1-star rating, you automatically fail the mission and have to start all over again. You can’t move forward unless you win the previous battle which can be time consuming. I had to quit and walk away a couple times on a certain mission because the objective wasn’t clear to me in the beginning and no matter what I did, my time ran out.

At the beginning of each mission, a general gives you some insight on what the battle is and what your goal is. When you enter the mission, you can clearly see how many turns you have, how much money you have, as well as mechanical and nuclear supplies. This updates and pops up after every single turn to remind you of where you stand.

I was pleased with the graphics of the game. The characters look life-like on the main menu, but it’s actually pretty cartoony. In battle, looking at your troops and military tanks, they look like sprites, but you can easily tell the difference between everything. The troops you can control have a white ring around them that goes away after you move them for the turn. The rest of your team has a green health circle while the enemies have a red health circle.

The music was up-beat and fun as well. It worked well with the war theme of the game and the sound effects were spot on with gunfire, tanks moving, and airplanes flying overhead.

World Conqueror X can be a long game. There’s a lot to do in the various modes and each individual turn can take a good couple of minutes. Each battle has a lot to remember and keep track of which can easily get confusing. However, it was a fun game and if you’re a fan of turn-based strategy, World Conqueror X may be for you.

World Conqueror X takes turn-based strategy to a whole new level with its many modes and variety of stages. Leaning a little bit about World War II is an added bonus.