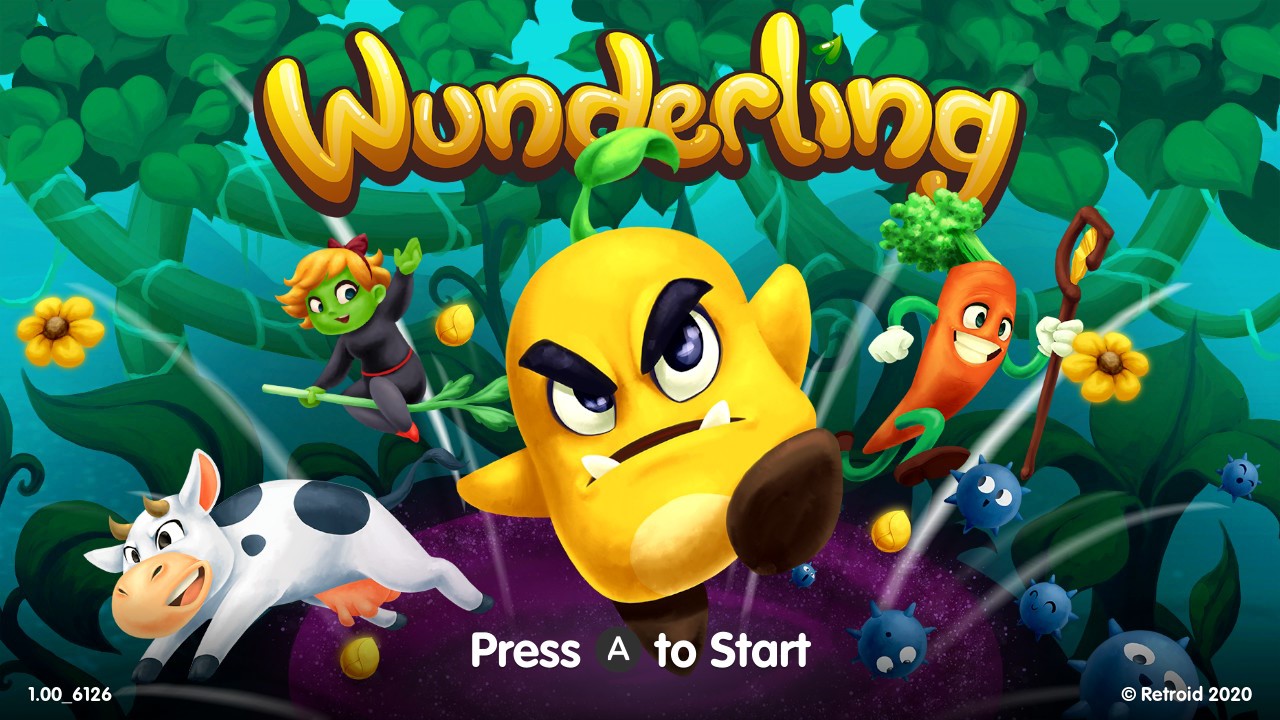 Wunderling is a platformer puzzle game from Retroid Interactive. You play as a potato-like creature who becomes a minion of a witch. She’s after Carrot Man, who is trying to save Princess Pea. The story itself is a bit silly and mocks Super Mario, but this game is a delight. 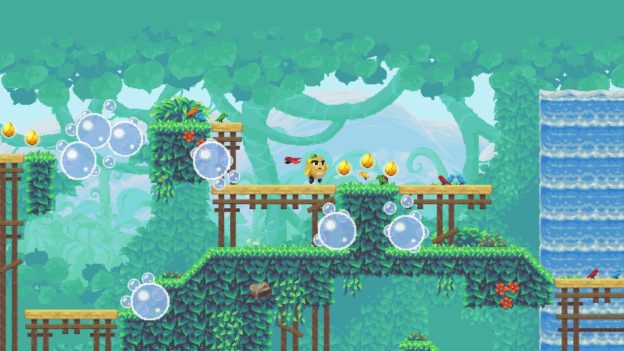 The game starts with Carrot Man running through a level and completing it by sliding down the end flagpole. He stomps along the potatoes (the game isn’t clear on what exactly your character is so I’ve deemed them potatoes) frustrating the witch the farther along he gets. Thus, the witch revives you and have you chase after Carrot Man. Then, off you go on an adventure!

Wunderling throws a lot at you, yet it’s a simple game. However, the gameplay can get complex quickly, and each level is meant to be played multiple times. You’ll die a lot as each part is trial and error to figure out the puzzle, master your platforming skills, and make it to the end of the level. 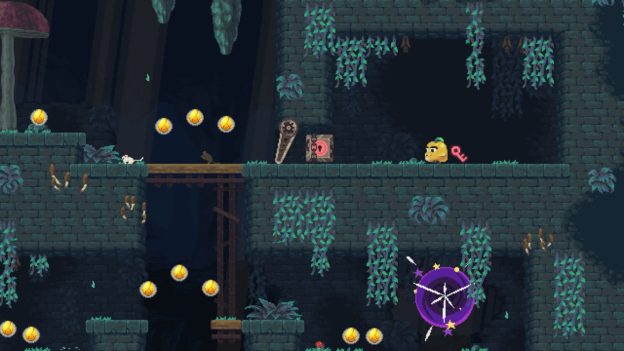 The controls and the levels start simple. You don’t control where your character goes – if he’s facing right, he’ll walk to the right until he hits a wall. Then he’ll turn around to the left. This makes it so you need to make him jump at the precise times, so he doesn’t fall off a cliff. Often, you need to make him jump to a higher place just to get him to turn around so you can finish the level. The route, for the most part, is laid out in front of you, and you need to trust your potato to know where you go. If you can jump, jump. If there’s a spike ball, avoid it.

In the beginning, all you can do is jump. However, there are more mechanics you slowly learn the farther you get into the game. For example, you can later wall jump. You learn to dash as well, but this requires you to have a blueberry. This will recharge or, if you need to dash multiple times in a row, the level will have a blueberry laying in your path for you to collect. 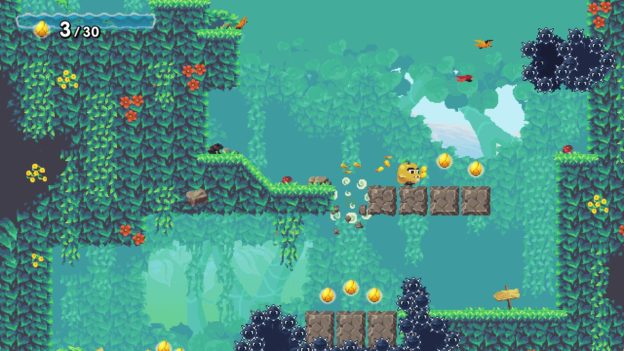 The levels themselves will have mechanics for you as well. For example, some will have speed boosts or wings to let you fly. These can help or hinder you. Others might have bubbles. If you run into a bubble, it’ll float you back. Often, it’ll catch you before you fall to your death or hit a cluster of spike balls. On the other hand, you might accidentally touch a bubble. There’s one level where bubbles surround the end portal, and it’s hard to miss the bubbles. I kept going back and, after a few minutes, your heart begins to deplete.

In every level, there are sunflower seeds to collect. These give your potato energy to keep going. There’s no energy meter and he doesn’t slow down when he gets tired. However, if you go a while without collecting seeds, a heart will appear above your head. It’ll empty, warning you that you’re about to die. If you die, you have to start the level again either from the beginning or from a checkpoint, if you made it that far. 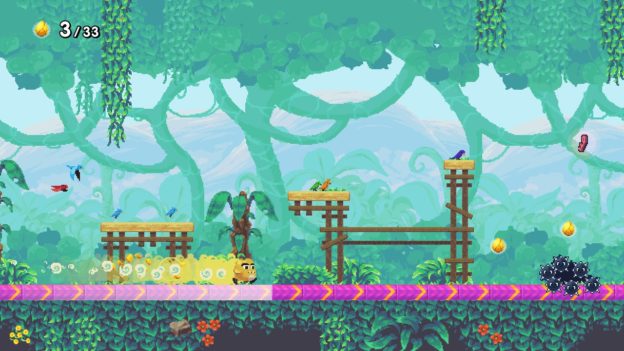 The checkpoints are generous, too. All the levels are fairly short, but some may have two or three checkpoints. The game recognizes the parts of certain levels that may keep you stuck for a while. When I say “stuck,” I mean some jumps need to be absolutely precise, or you need to fly just right in between two walls spikes.

Each world has 15 levels. After beating about ten or so, you can move onto the next world. The farther you get in a world, the harder the levels become, so it’s nice that if you get too stuck, you can still move on and figure it out later instead of rage-quitting since there are no hints. 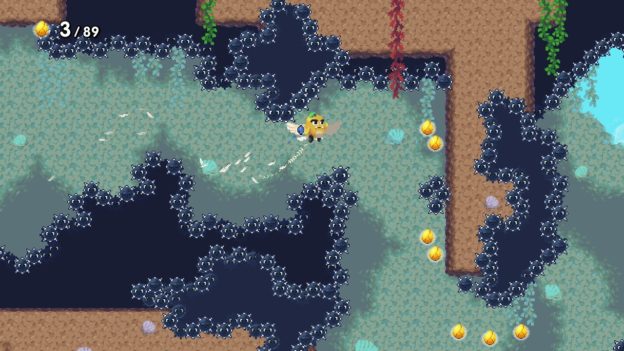 Each level is unique in its own way, putting a twist on the mechanics you’ve learned. The game is challenging, but it doesn’t get too hard too fast. Each level is doable, even if it takes you 100 tries. When you finally beat that difficult level, you’ll feel so good about it! Usually, after the harder levels, the following one is on the easier side. Again, it’s like the game is self-aware and knew you might need a mental break after a particular level.

Overall, the pixel-like graphics and level designs are a delight to see on the Switch. Each area is different from woods to fire to caves and more. Each area has its own music as well, and it’s varied enough that you don’t get bored of it for 15 levels. The controls are smooth, and the gameplay is challenging but not unforgiving. Wunderling is a well-rounded game that you don’t want to miss.

Wunderling is a challenging and fun puzzle platformer. With smooth controls and unique level designs, it’s hard not to say, “one more try.”