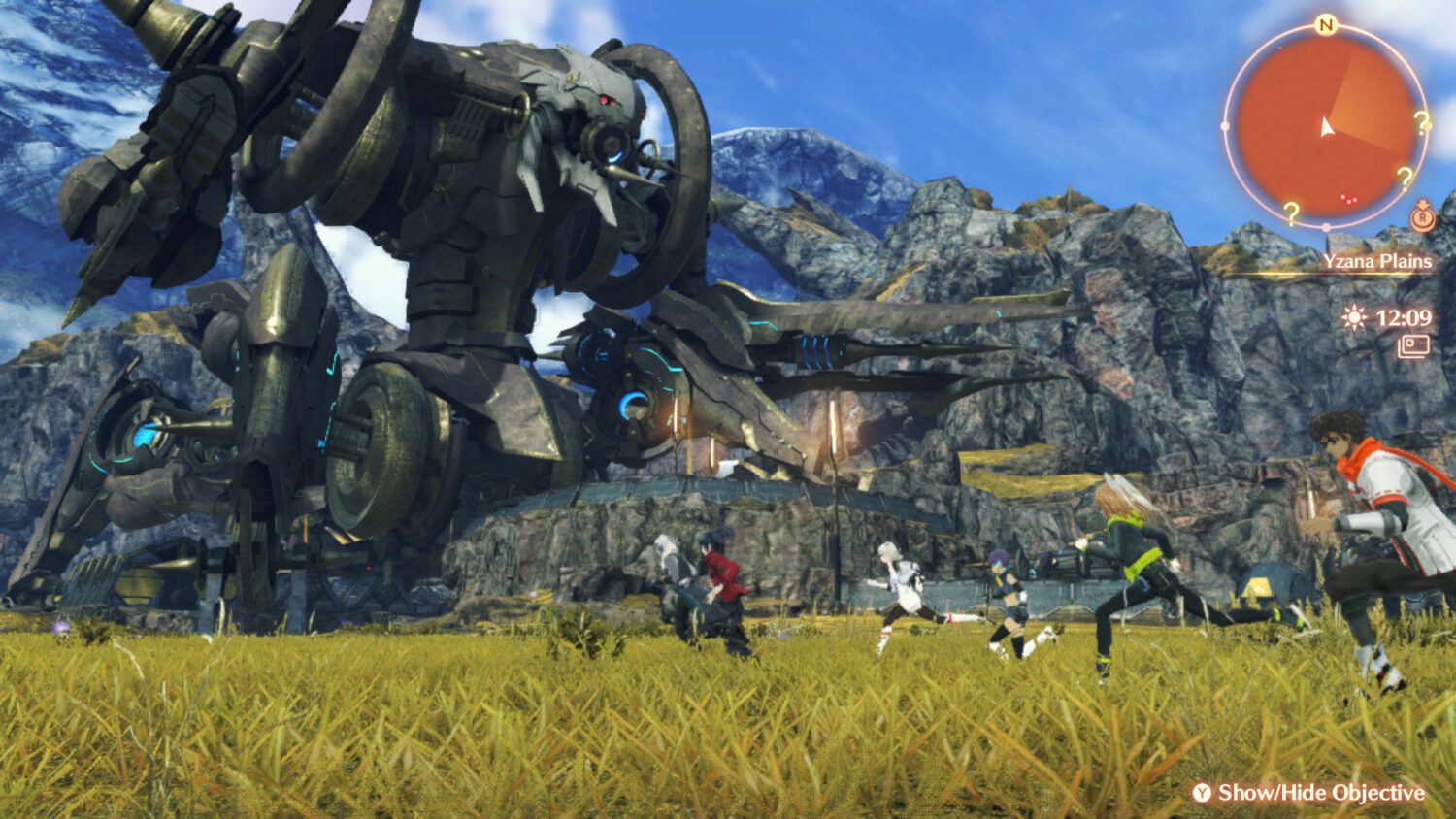 Ugly war in a beautiful world.

Instead of calling this a review of Xenoblade Chronicles 3, I’m going to say it’s an appreciation. I’ll still give it a rating, but the game has been out for a month now. Those reading this already know it’s great and should have it on their must-buy list.

An in-depth review of all the game’s working parts would have far too much to cover. Being an epic JRPG, Xenoblade Chronicles 3 is marked by its melodramatic plot, complex characters, world exploration, glorious monsters, and intricate battle system. Fans of any of the other Xenoblade Chronicles games know what to expect, and this latest (and last?) entry in the series delivers on all counts. 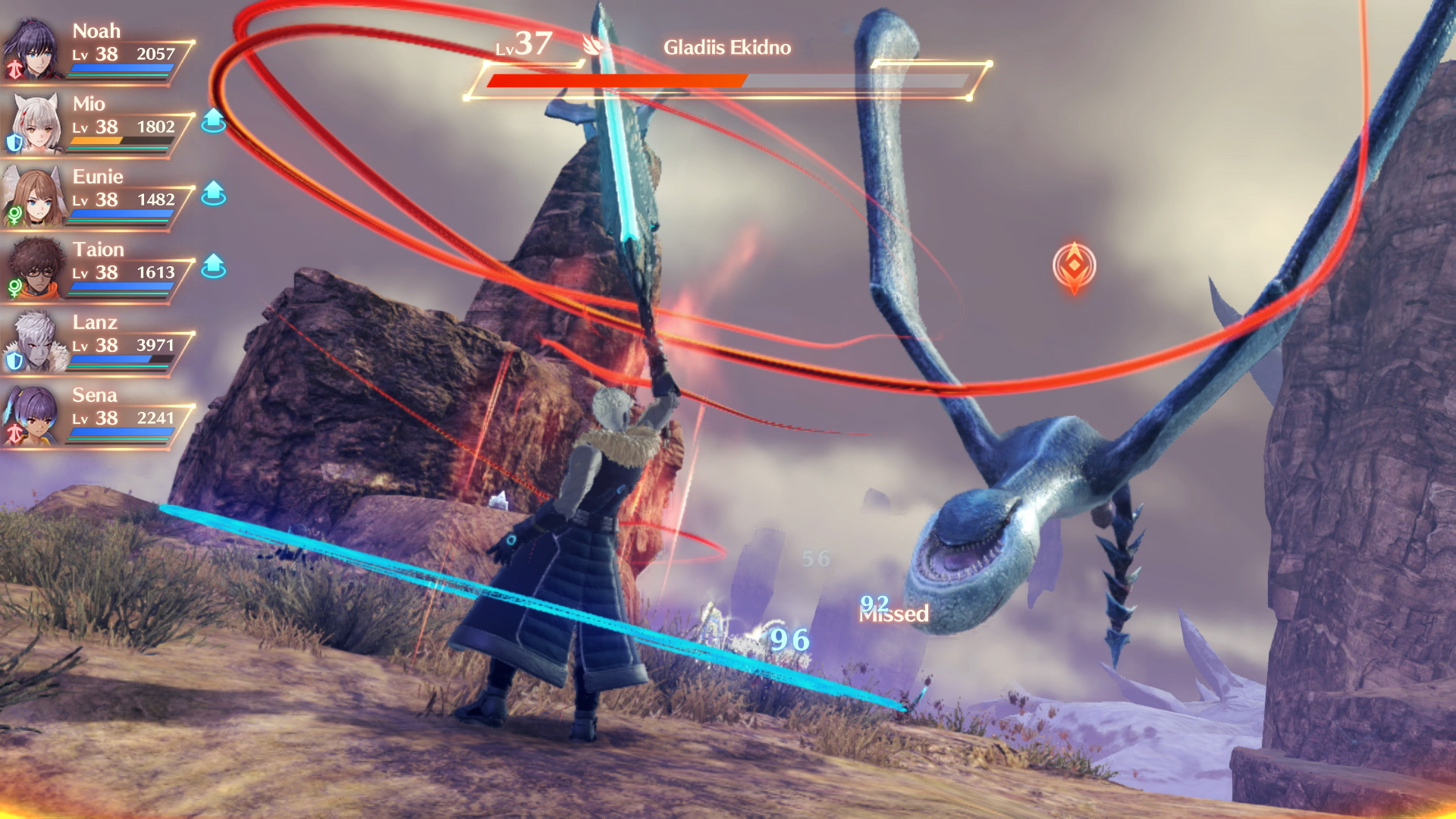 But is it better than the others? That depends upon your preferences.

Briefly, the story centers around two groups of three soldiers from opposite sides of a perpetual war. Noah, Lanz, and Eunie are Kevesian soldiers. Mio, Taion, and Sena fight for Agnus. The angle here is that fighting is pretty much all they know. From the moment they’re “born” into the world of Aionios (at what would be our early teens, I guess), they’re trained to “serve the Queen” via combat. This lasts until they die or until they’ve lasted 10 years. At that point—via what’s revered as “Homecoming”—they return to the Queen. It’s a very bee-like existence, really, save for the whole mandatory-death timeline.

Our band of soldiers from Keves and Agnus seem cool with this, until they’re not. A chance encounter forces them to reluctantly join together, and they set out to find the deeper, darker reasons for their fates. 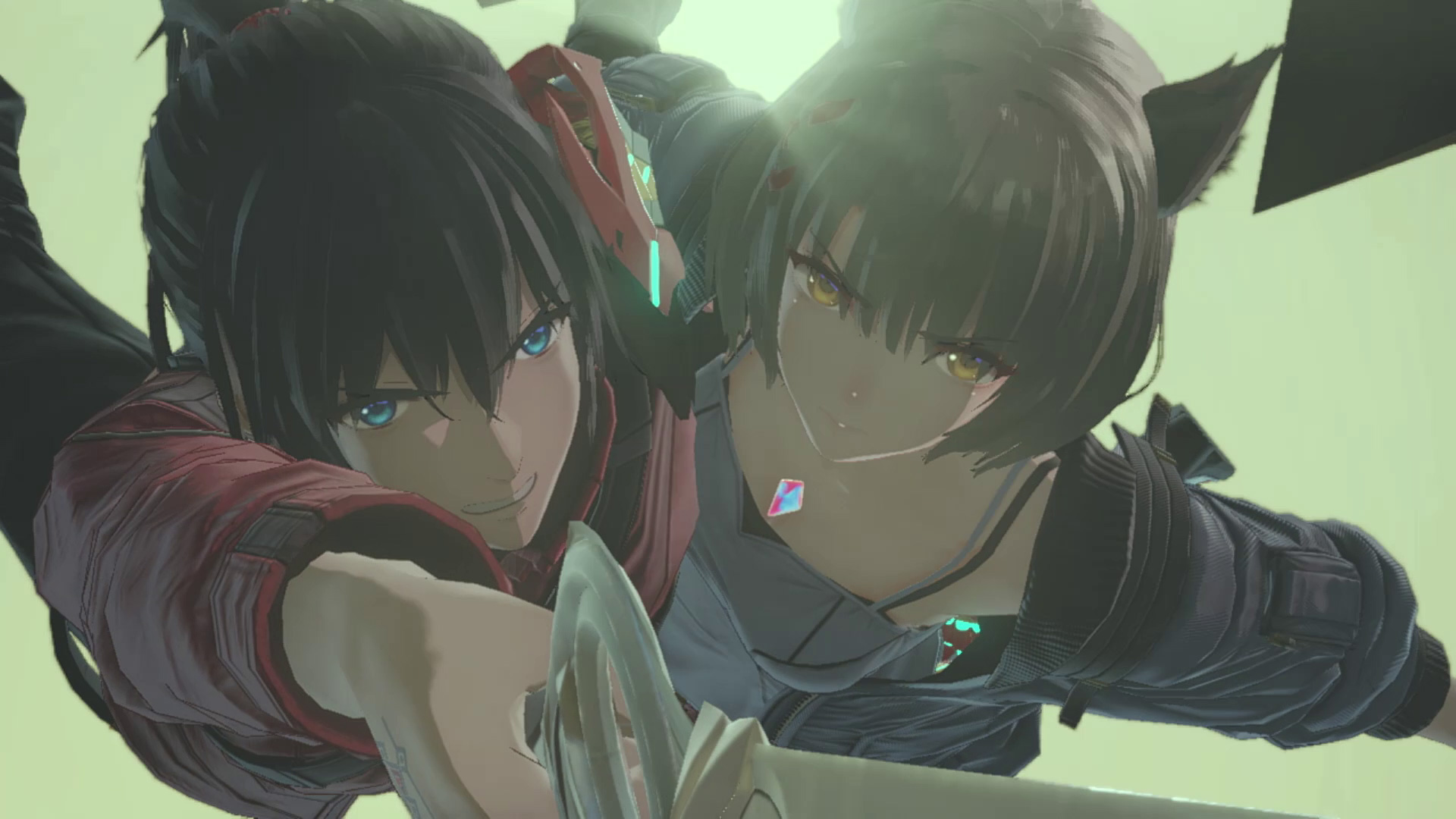 Trouble is, both Keves and Agnus now see them as enemies, so they truly don’t have a friend in the world.

That changes as you progress through Aionios and the game’s ever-winding plot. Xenoblade Chronicles 3 hits every mark fans would expect along the way, but it does so with a degree of intelligence and reverence that hasn’t always been present. The biggest example is that Noah and Mio are both off-seers. It’s their job—via a rather haunting tune played on their flute—to ferry the spirits of the dead to their queen. This leads to some rather heavy and intelligent conversations about the afterlife and our need to heroicize fallen soldiers. Do we do that for their comfort or our own? 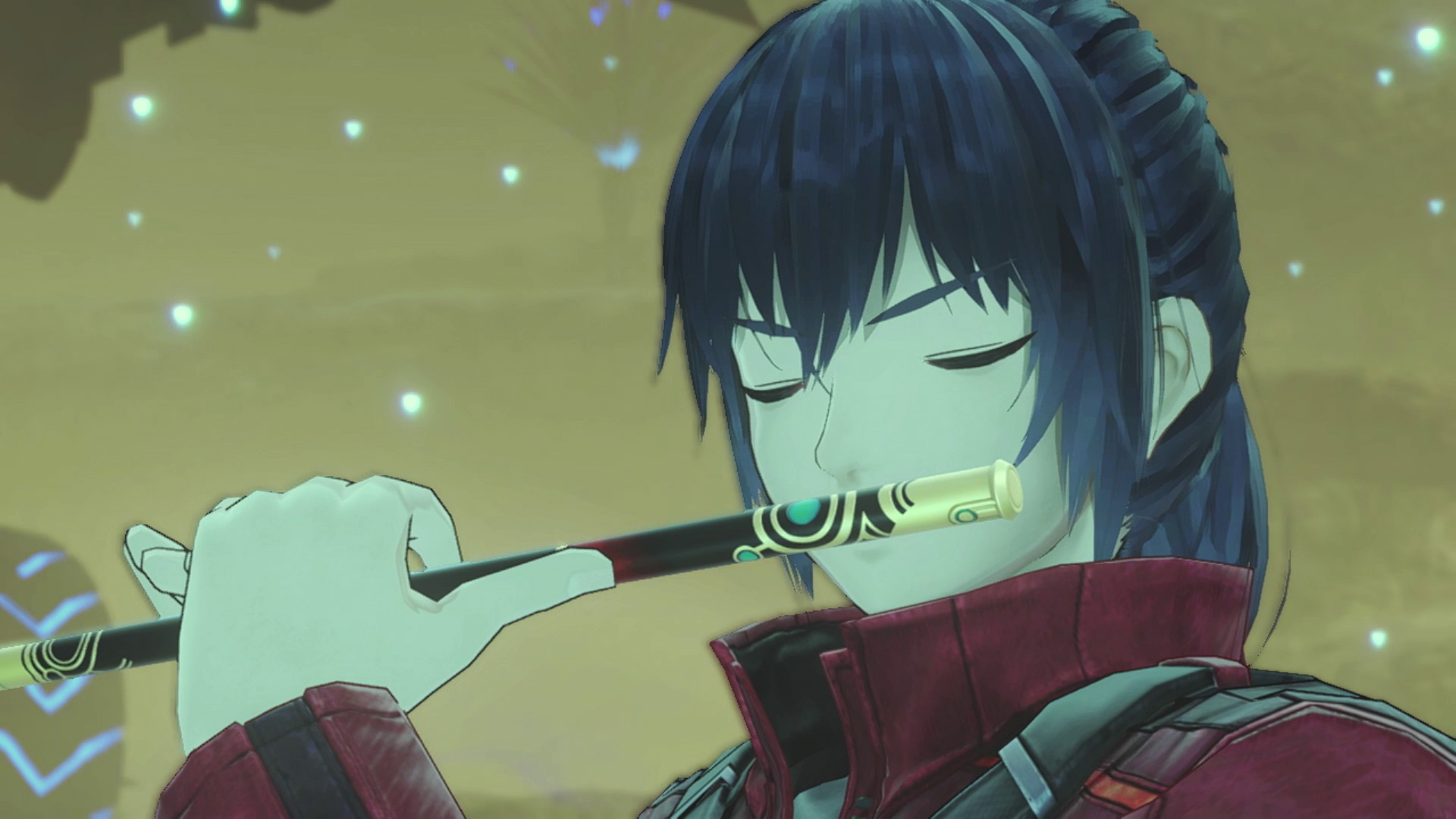 The story doesn’t usually take a stance on such issues, it just asks the questions and moves on. Still, if you’re looking for an adventure that’s all about killing ’em and all and letting God sort them out, you won’t get that here. In fact, you’re tasked throughout the entire game with off-seeing the spirits of the “husks” you find scattered throughout the world. War is death, constant death, and Xenoblade Chronicles 3 never lets you forget that.

A drawback to this approach is that the story is not as fun as with the previous entries. That may also be due to the characters. Our party of six are all interesting people who are wonderfully acted, but this is my least favorite group from the Xenoblade Chronicles games (save for X, which isn’t really part of the trilogy). Eunie and Lanz are the standouts, and Taion really won me over after a dozen or so hours, but is there a Reyn in the group? A Mythra or a Zeke? No, but honestly, one Zeke and his Eye of Shining Justice is more than we ever deserved.

Most of the game’s personality comes through the Heroes you can recruit throughout the adventure. There are many to unlock either through the main plot or through side quests, and you can place one in your party at nearly all times. This is wonderful for battle strategy, as there are three main roles that each combatant can serve: attacker, healer/buffer, and defender. If your party needs a little more defense oomph for a particular boss, select hero with solid defense skills. Each hero is attached to a main character when first playable, allowing that character to change roles and acquire new skills and arts that can then be used with other roles. Eventually, other characters from the main party can then use the heroes’ classes, too, although some matchups are counter-productive. It seems complicated at first, but it’s surprisingly easy to work through. The main benefit is that you really can swap your main character without having to totally rethink your battle strategies.

I don’t want to go any further into the multi-layered battle system for fear of dragging things out, but I will say it’s likely the easiest of the Xenoblade Chronicles games to master. The boss battles aren’t as rewarding as the sphere-busting approach of Xenoblade Chronicles 2, but you will feel like you have more control throughout. Swapping characters during combat is easy and fun, and those you aren’t controlling are pretty smart even when you’ve not issued basic commands to them.

I found these battles—including those against the wonderfully named and designed “unique” monsters—easier to win in Xenoblade Chronicles 3 than in the earlier games. This is due in part to the streamlined combat, but it’s mostly because it’s so easy to become over-levelled. In previous games, you had to take on sidequests in order to have a chance against the plot-driven enemies. Here, the numerous sidequests and Hero missions push you far above where you actually need to be. By the time I reached the end-game confrontations, I was nearly 20 levels above my enemies. That was with no grinding, just my dedication to maxing out my Heroes and “answering” every question mark I found on the field. It made the final battles somewhat anticlimactic, but considering I’d pumped around 140 hours into the game over a month, I was somewhat glad to just breeze through the conclusion.

Completing the story—it’s worth noting—doesn’t mean you’re done with the game. New elements open up, and there are all those quests and unique monsters left behind. The forthcoming DLC (via the expansion pass) will add yet more over the next 16 months, and I’ll welcome those periodic incentives to return to Aionios. Until then, I can look back on the main story and love so much about it—from its clever sense of humor to its more emotionally powerful moments. Aionios is a beautifully designed world filled with wonders to uncover, so even running around aimlessly between plot points is a lot of fun. It’s also great that the Hero system gives us a wealth of characters to meet and utilize without forcing us into the gotcha system of the Blades of Xenoblade Chronicles 2. And hey, no arcade mini-games to slow things down!

There’s plenty more I could bring up—good and not so good—but nothing that changes my opinion; Xenoblade Chronicles 3 is a fantastic final (?) chapter in the series. You’re perfectly justified to give up a month or two of gaming time to the struggles of Noah, Mio, and their friends. You may even find yourself compelled to finally start that new game plus for Shulk and Rex’s chronicles. What’s a couple more months of gaming time?

The massive world and intricate real-time battle system of Xenoblade Chronicles 3 may seem daunting even by JRPG standards, but both are easy to get into. It’s not my favorite Xenoblade Chronicles game, but I can say with certainty I enjoyed nearly every battle, plot twist, and Nopon I encountered in the 140+ hours I’ve put into it (so far).