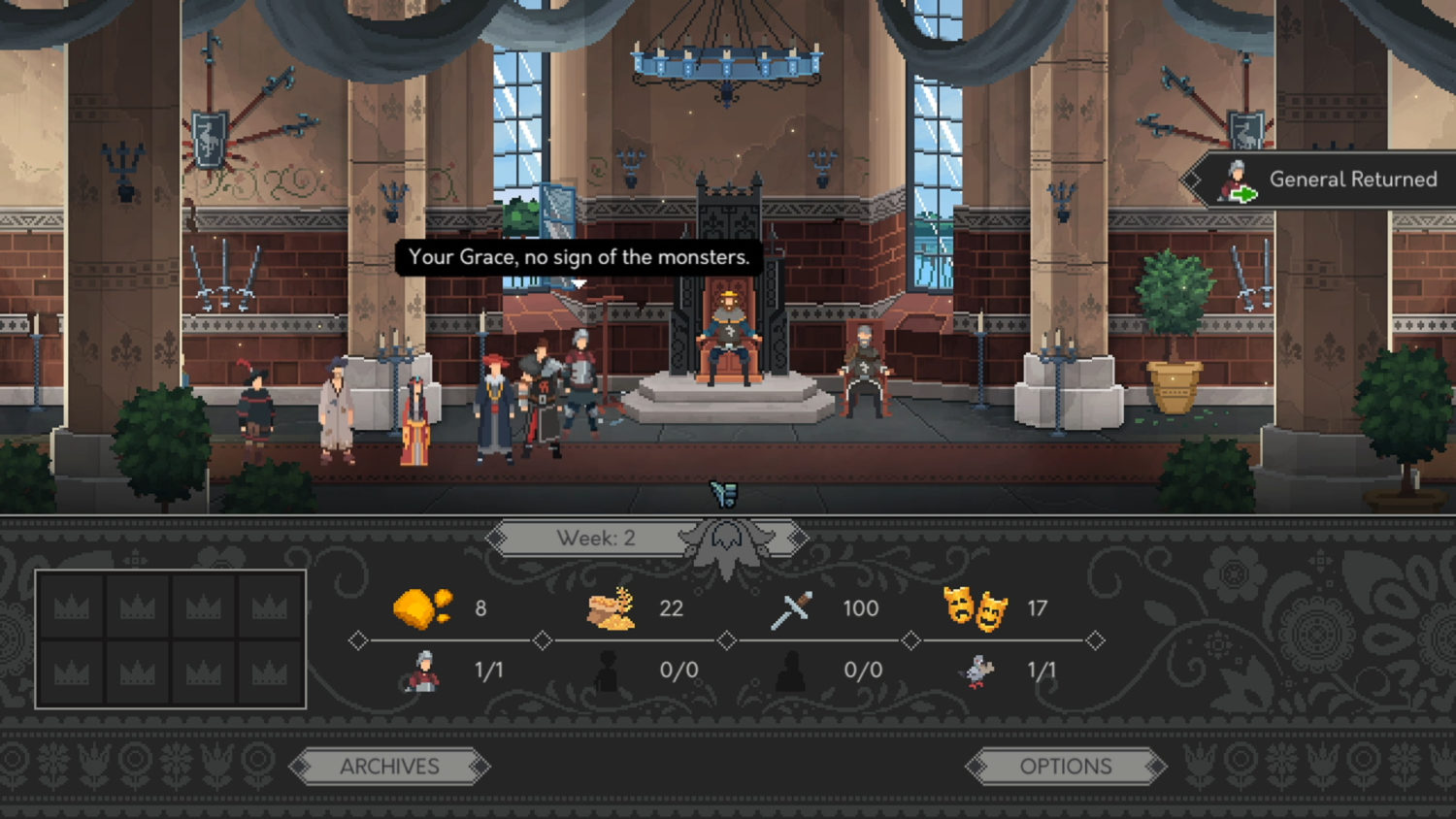 Centred on the troubles of a medieval kingdom on the brink of war, Yes, Your Grace places you on the throne of Davern. Playing as King Eryk, it is up to you to navigate the politics affecting your subjects, your neighbouring countries and your own family.

You have access to a limited amount of resources with which to maintain a peaceful and prosperous land. People come to your castle asking for your help, some with personal issues and others petitioning for resources for the whole community. Your advisor and generals bring news from beyond your land. It is up to you to establish and nurture allegiances with other leaders as an enemy army encroaches on your borders.

Your decisions do have repercussions within the game. They can affect the progression of your alliances. The way you respond to requests from your subjects will influence their approach to you later in the game. Some of your choices will have consequences that directly impact the people who visit you. This offers a good sense of control. The small ways you see your decisions having direct results makes you feel invested in the game. 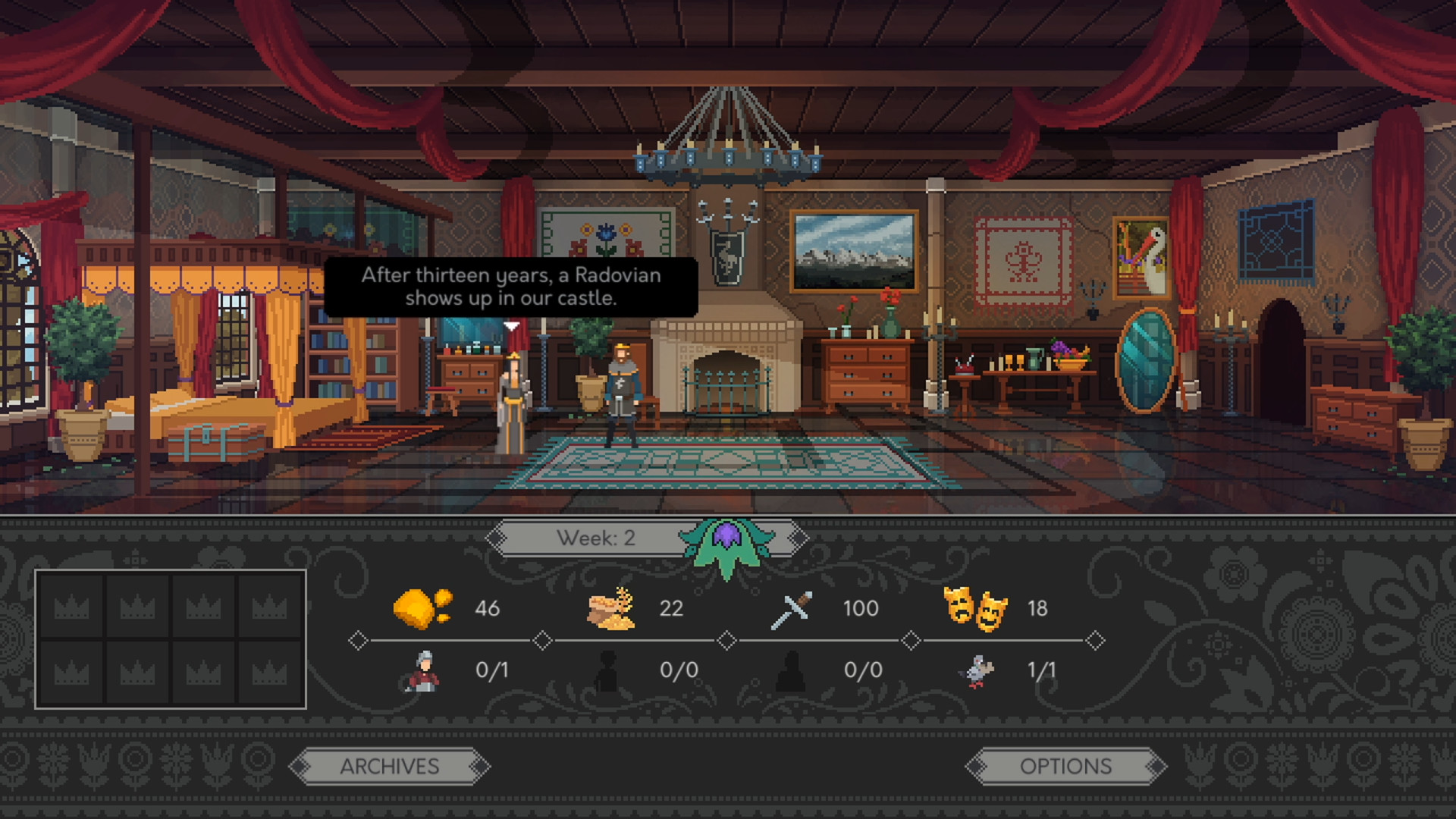 The overarching story of Yes, Your Grace, however, doesn’t change all that much. The major plot points stay broadly the same even if you make different choices on a separate run. As long as you don’t lose so much money or resources that your kingdom collapses, your decisions will mostly influence the subplots of the characters around you.

As well as managing the needs of your kingdom, you have to consider those of your family. You have three daughters, two of whom are old enough to marry into other royal families to cement alliances. But their desires are also key. It is very cute that part of the game includes checking in on them, talking to the youngest about her pets and practising fencing with the restless middle one. This adds a personal element to the game that is quite sweet, and also complicates the idea of marrying the girls off for the sake of politics. 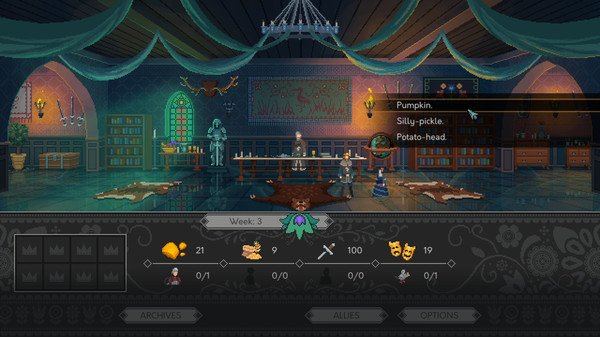 Yes, Your Grace has a short but engaging plot that spans war, murder and magic. The whole game doesn’t take more than a couple of hours to get through, but they are an enjoyable couple of hours.

The choices you make are simple enough. Your focus is ultimately securing allies and making sure you have enough supplies to keep your country afloat from week to week. The balance between narrative and engagement is well executed, with helpful prompts that ensure you cover all your bases on any given turn.

The limited impact of your decisions doesn’t detract from how engrossing Yes, Your Grace is as a game. The pixel art is fantastic and the soundtrack does a great job of grounding the setting. For all its focus on strategy, it is calming to be able to think about the concerns of a world very different from our own.

Yes, Your Grace is a short but absorbing game that strikes a sweet balance between the concerns of a kingdom and a family.