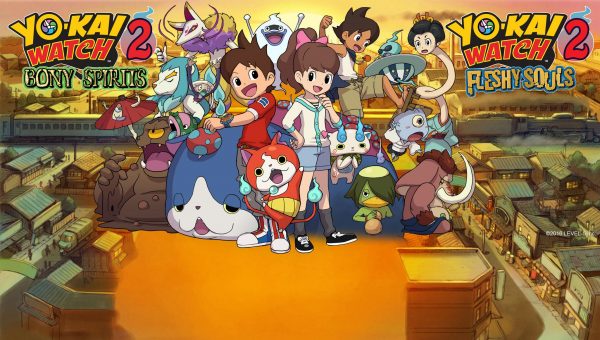 After a long wait, fans of the Yo-Kai Watch series will finally be able to get their hands on the sequel as it makes its way to North American shores for the first time. With two different versions available, Yo-Kai Watch 2: Bony Spirits and Fleshy Souls, developer Level-5 has fine-tuned their Pokémon inspired open world RPG. While the promise of over 350 Yo-Kai new and old to collect is impressive, does the sequel surpass the original? Read on to find out! 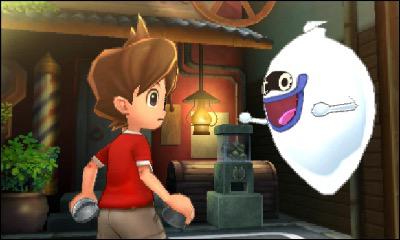 Being an open world game, it goes without saying that the environment you explore is one of the most important factors. Yo-Kai Watch 2 brings players back to Springdale, a bustling city with plenty of places to explore. There are shops to peruse, areas to search for items, and even spots to catch fish and bugs. In addition to this, some railings can be walked or sidled across, and following these paths can lead to even more useful items. Springdale isn’t the only place you’ll be restricted to this time around, as the inclusion of a new train system allows for you to travel to different areas. These special locales have their own distinct charm, (San Fantastico is a coastal town whereas Harrisville is more rural) and there are plenty of places to explore and items to find in each. The developers did a great job of making the places you journey to feel colorful and alive. Riding the train is even an immersive experience, although despite the numerous stations you can stop at, only a select few will let you leave the station, which is disappointing. 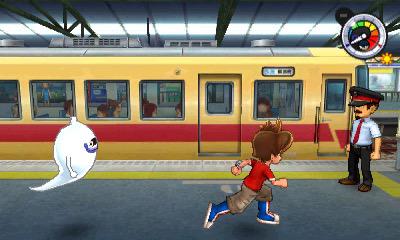 Graphically, Yo-Kai Watch 2 looks similar to the original, but that doesn’t take away from the charming nature of this title. Colors are bright, the music is cheerful and quirky, and characters both human and spirit alike have a wonderful animated film look to them. This makes Springdale and its surrounding areas an enticing place to be in, and you can easily log in plenty of in-game time just traveling around collecting items or taking the train to see all the sights. 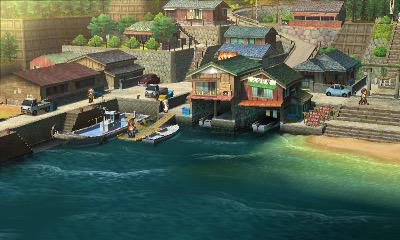 In regards to the story, you play as either Nate or Katie, the male and female protagonist respectively. After some mischievous Yo-Kai steal your watch, your character forgets the events that took place in the first game. It doesn’t take long to remedy this, as you quickly reclaim your watch and reunite with Whisper, your personal Yo-Kai butler. As events transpire, you’ll eventually be able to travel back in time to witness the creation of the first Yo-Kai watch, and even learn more about the history of the Yo-Kai. As a mission based game, the story isn’t that gripping until you gain the ability to travel through time, but the inclusion of some excellent voice acting within the cut scenes is reward enough for progressing. 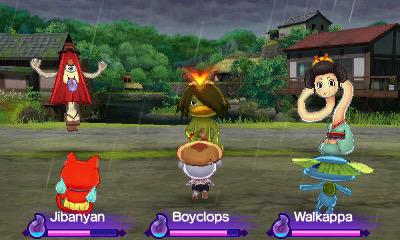 Battling has also gotten more interesting with the inclusion of the model zero Yo-Kai watch. Yo-Kai fight for you automatically, and you can have up to six with you at a time. As your chosen three Yo-Kai battle, you can substitute in others on the fly by rotating the wheel on your watch with the touchscreen. In addition to this, you can pin enemy Yo-Kai to direct your team’s attacks, use items to give you aide in battle, and even launch special moves known as soultimate attacks. For new players, the battle system may seem odd at first, but you quickly get the hang of things with a little practice. 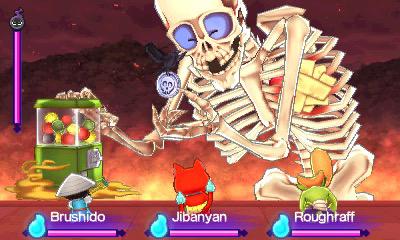 For those familiar with this style of fighting, you’ll be able to switch to the model zero watch mid-battle to try its new features. You can poke enemies to find their weak spots or trigger special actions that may give you an edge in the fight.  You can even pull off stronger soultimate abilities known as M-skill. These attacks have much more power and moxie, but they’ll drain the soul gauge of the Yo-Kai they’re next to. This inclusion gives some nice variety to the battles, and offers experienced players a new way to play. 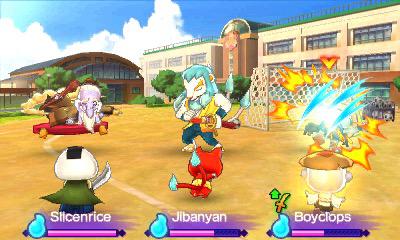 The Yo-Kai themselves range in styles from overly cutesy to super gross, and they each have their own fun personality. Each version of the game has its own set of Yo-Kai to collect, and with over 350 to obtain, you’ll certainly have your hands full. Catching Yo-Kai can be a bit of a pain though, as your main method of acquiring the kooky spirits is to throw a food item at them in the beginning of a battle, and hope that is enough to convince them to join your cause after you win the fight. 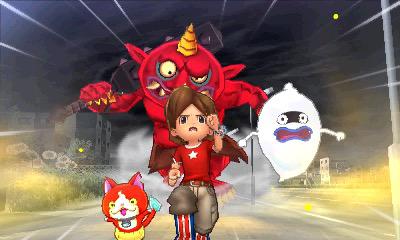 As a sequel, Yo-kai Watch 2 builds upon and improves what made the first game so great. There are more areas to explore, and each is filled to the brim with new missions, collectibles, mini-games, and special events that always give you something fun to do when you feel like getting sidetracked from the main story. There are new battle mechanics to explore with the model zero watch, and the boss battles are strange, challenging, and fun all at the same time. Last but not least, the ability to battle and trade Yo-Kai online with friends and strangers alike is a huge bonus for those who like the competitive scene. If you’re the type of gamer who enjoys exploration and collecting mixed in with your RPG’s, then you’ll have a great time with this game. If, however, you’re looking for a more streamlined, story driven RPG experience, you might need to look elsewhere.

Yo-Kai Watch 2 builds upon what made the first game so successful. The expanded world, new battle mechanics, and inclusion of online play make this a much improved sequel.