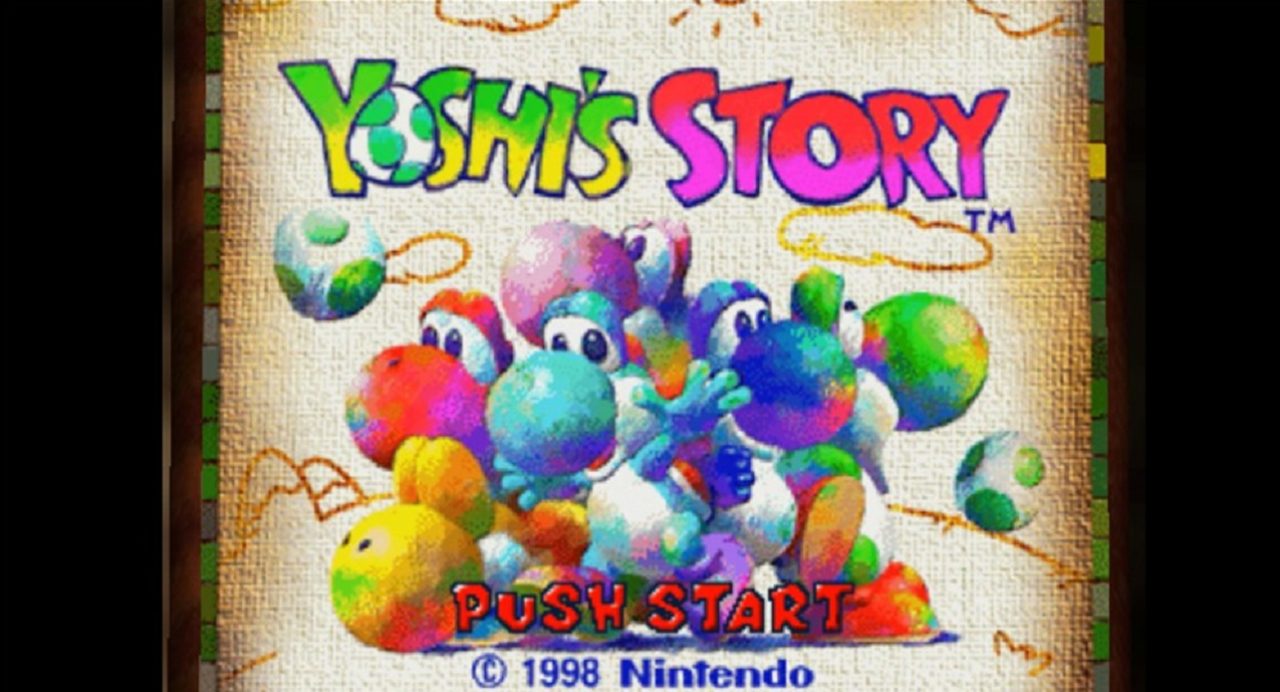 The spring release of Yoshi’s Story for the Wii U Virtual Console was a cause for happiness.  Now this Nintendo 64 classic, albeit somewhat misunderstood, has a chance to be appreciated by a new audience.  At just $9.99, Yoshi’s Story is a bargain.

Which isn’t to imply that Yoshi’s Story was a bad deal back in the day.  However, even as an Nintendo 64 Player’s Choice title at $39.99, the amount of content could seem light compared to the cost.  I stress could, since this largely depended on how the game was approached.

Are you a completionist who enjoys unlocking new levels, thorough exploration, and finding as many secrets as you can?  And most of all, does the thought of improving your high scores and posting your name on local leaderboards give replaying levels a special appeal?  If you answered yes to these, there’s a good chance Yoshi’s Story is already part of your collection – with nearly 3 million copies sold, it was an N64 best seller.  If you answered no, perhaps I might persuade you.

This platforming adventure finds the island being locked in a picture book, while the Super Happy Tree is stolen.  The culprit is none other than Baby Bowser.  Now if you just want to run through the game from beginning to end, it is pretty easy, not to mention quick.  But you’ll only being seeing a small fraction of the game.  I have a genuinely hard time envisioning how anyone could be satisfied quitting after just a single playthrough.

Its unique scoring system gives Yoshi’s Story such great replay value.  Depending on which of the many fruits you collect, and the order that you collect them, your score can really spike.  Aiming for all melons is the best approach, but it is challenging.  As far as enemies, which ones you defeat, and how you choose to defeat them, can also alter the score.  With local leaderboards, up to ten of your best scores can be saved.  By exploring and practicing, you’ll discover that there’s more here than initially meets the eye.

Visually Yoshi’s Story has aged much better than most N64 games.  Superb for their day, the 2.5D design holds up quite well.  The colorful, unique style is bound to make most “super happy”.  The overall presentation is lively.  Kazumi Totaka’s soundtrack (who’d work on other Yoshi games) is a fine fit.  The singing Yoshi’s might not be your cup of tea, but they do grow on you.  At the very least, they’re better than a screaming baby Mario.

The design of Yoshi’s Story is one that appeals to a broad audience.  For less experienced or younger gamers, a shorter, easier adventure can be enjoyed.  For those desiring a challenge, it’s definitely there if you want to embrace it.  Yoshi’s Story isn’t like its predecessor, but it should be clear that it wasn’t trying to be.  It went for a different approach.  While it might have left critics somewhat mixed, the sales numbers show the take was very successful.  This is an enjoyable classic that’s aged very well.  If you don’t own it, spend $9.99 to download it, or at the very least add it to your wish list.

This is an enjoyable classic that’s aged very well.