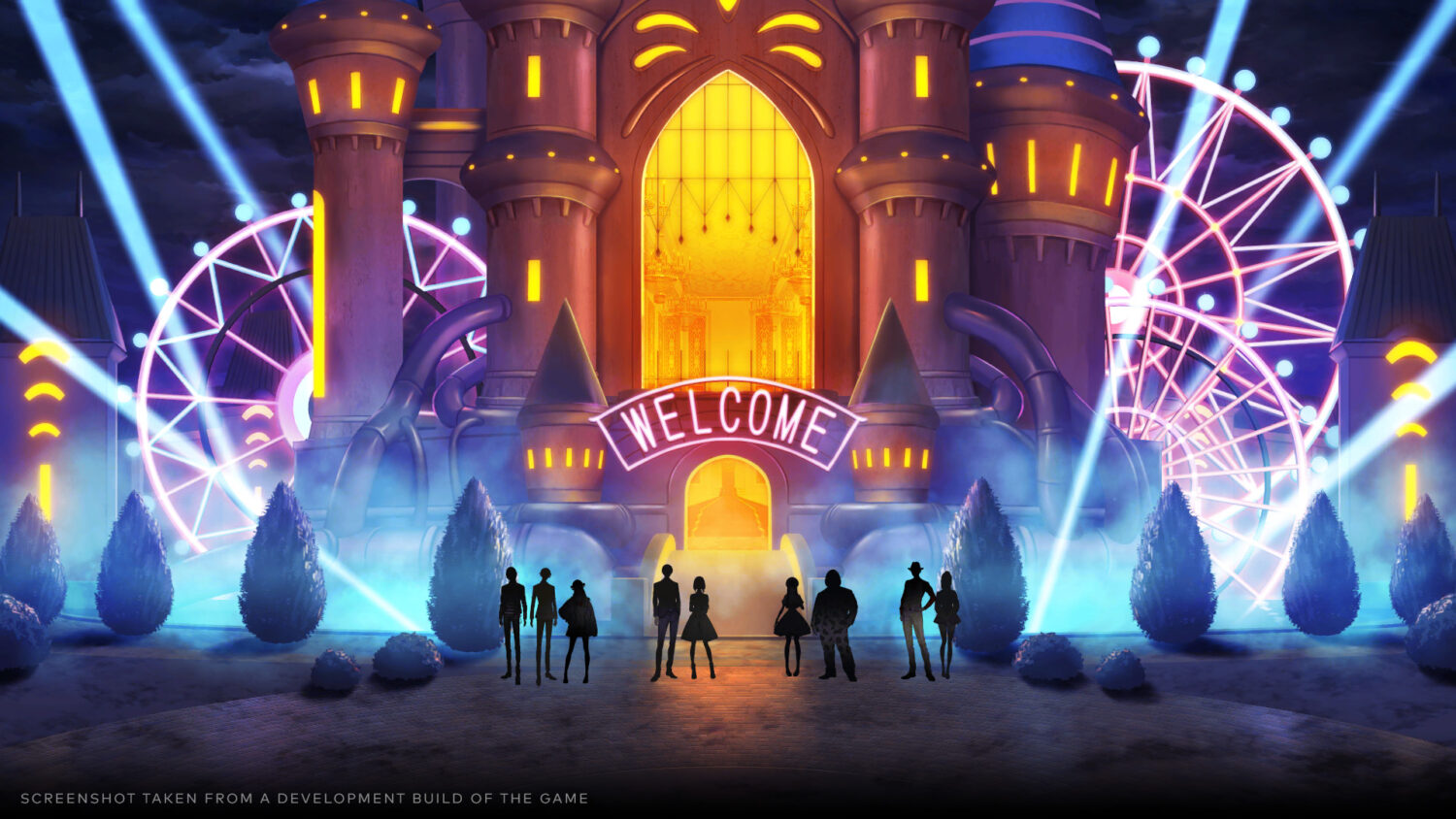 I don’t know exactly how to talk about Yurukill: The Calumniation Games. It does so much, and caught me so completely off guard, that any approach to summarizing it seems inaccurate. The only thing I can say with certainty is that I really enjoyed playing it.

Because I hate to gush, however, I’ll add a quick caveat. Yurukill is a mash-up of bullet hell action games and puzzle adventures. That’s part of the appeal, but the balance between the two may put off hard-core fans of either genre. The copious exposition between the action sequences may annoy shmup fans, and those seeking the puzzler narrative could be stymied by all the bullets they have to dodge. 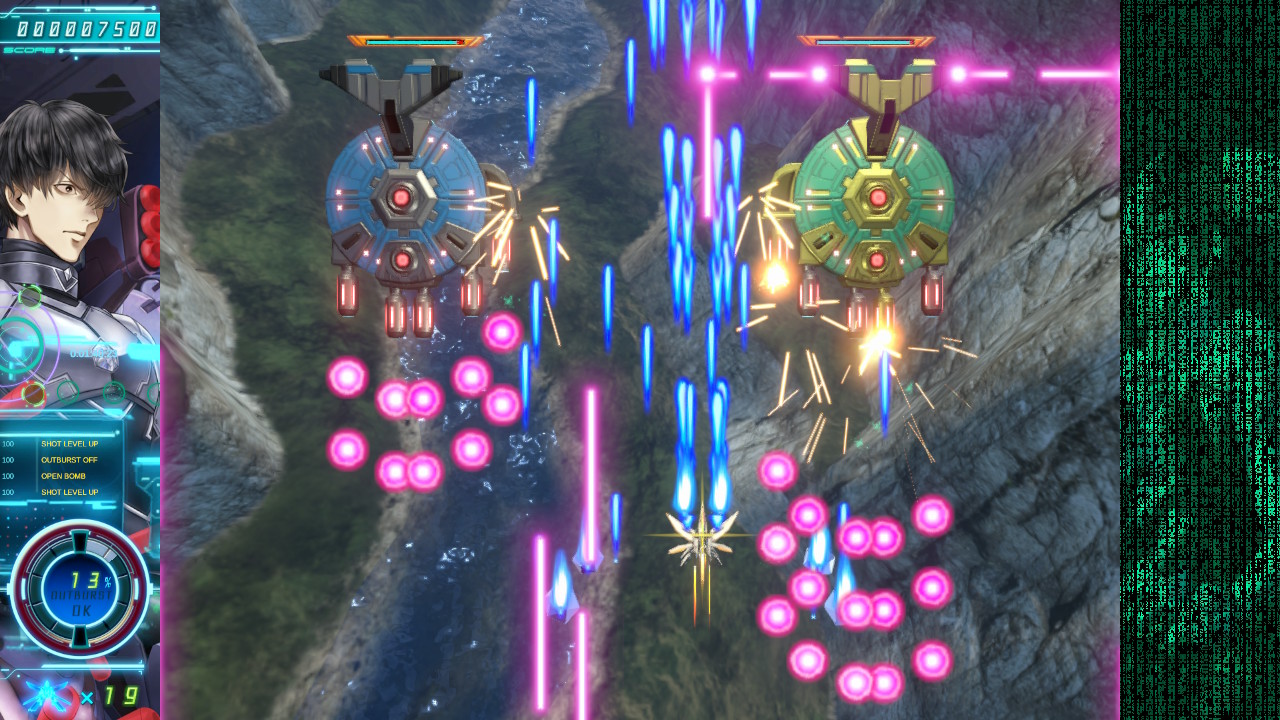 Thankfully, the developers acknowledged this via difficulty settings and game modes. Playing on Easy makes it practically impossible to lose the bullet hell action segments. And since those segments are unlocked once completed in story mode, action fans can take on harder difficulties and chase the leaderboard rankings. Thankfully, there’s a demo available to help you determine where you fit in.

Yurukill begins with a wonderfully bonkers scenario. A collection of prisoners convicted of murder are given a second chance to prove their innocence at an island amusement park(?!). They have to work through various attractions with the help of a partner, but that’s the kicker. The partners are the surviving victims of the crime, and they have the option of either pardoning you or executing you at any point based on how well you’ve made your case. At the end, one “team” will win, allowing that prisoner to gain freedom. The others will return to prison (provided they haven’t been executed along the way).

That alone would be enough of a story, but Yurukill digs deeper. Is there a connection between these contestants? Who’s funding Yurukill Land? Why’s Binko, the “host,” wearing a fox mask? What does the country’s judicial system think of all this? 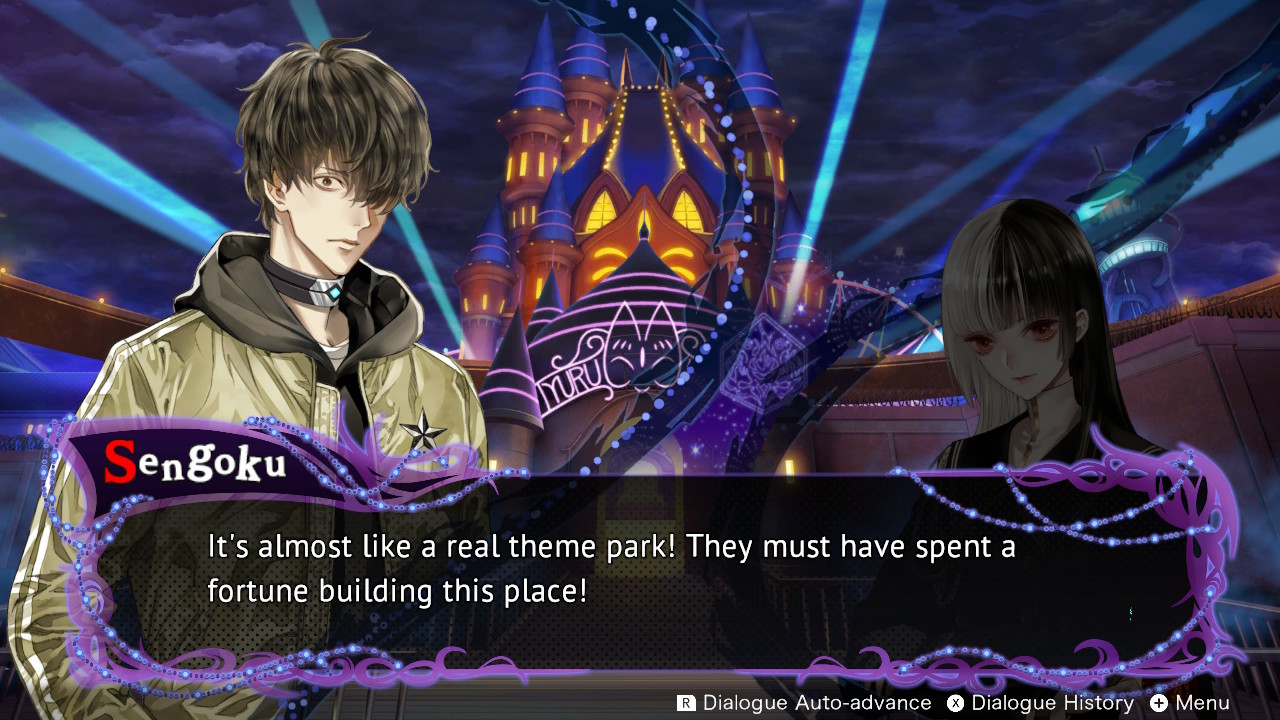 Each team (other than the wonderful comic-relief duo) gets a puzzle level centered around their crime. Although the setup for these levels becomes more diverse than I initially expected, all of them involve logic puzzles to work through in order to advance. You’ll search rooms for clues, then use what you’ve found to unlock the path forward. This is where details of the crimes are explored, and where the prisoner will attempt to argue his (or, in one case, her)  innocence. Some of these are a bit grisly, but always treated with a sense of humor that keeps the proceedings light. Arson, stabbings, the mass murder of crime families, even idol stalkings work into the story, but team names like Crafty Killers and Peeping Toms indicate we’re not to take things too seriously.

These puzzle levels are fun mainly due to the story and the Japanese voice acting. Our emcee, Binko, is played with gusto by Yu Kobayashi, whom I know as Lucina from Fire Emblem and Sasha Blouse from Attack On Titan. She’s wonderful here, going way over the top to hammer home the game’s macabre sense of humor. The puzzles themselves, however, are a mixed bag. Some are too easy, some are too familiar, and I managed to get past a couple without fully understanding what I even did right. 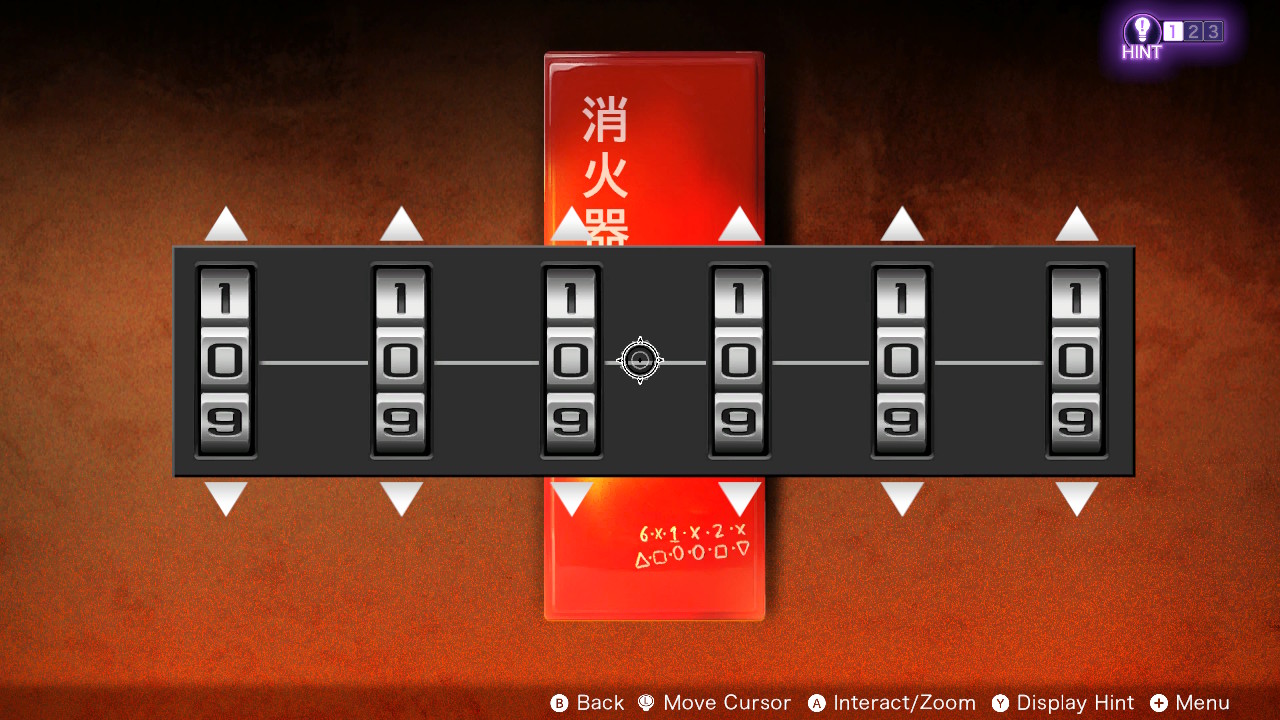 Note the hint system at the upper right of the above image. I used it a few times, but I used my oldest son’s help more.

After the characters are past the puzzles, they enter a “BR” simulation in which they must defend themselves from their executioner. This is the shmup section of the game. Before combat, the prisoner will be asked a series of questions about the crime. The more you get right, the more lives you’ll have at your disposal. On the Easy setting, this can go as high as 30. Again, no worries if you’re not good at shoot ’em ups.

Combat is broken into stages, with even more (an, in some cases, high speed) questions in between. The action is a simulation of the executioner’s anger towards the prisoner, so it’s up to the prisoner to break down that animosity. Provide enough doubt of your guilt and you’ll move on. But the combat is what really matters, and it can get pretty intense even on Easy mode (which I played…gotta make those review deadlines). You have one main attack, but doing so powers up alternative weapons that can be unleashed for more devastating shots or the ability to clear yourself from trouble. There are also hidden “Binkos” that provide extra lives if you can discover them and hit them with a special attack.

The action stages contain multiple boss battles in which you must break down the executioners’  “Mind Walls” and “Brain Barriers” while avoiding their attacks. Throw in a few timed quizzes and Ace Attorney-style evidence presentations and you can eventually bust through. 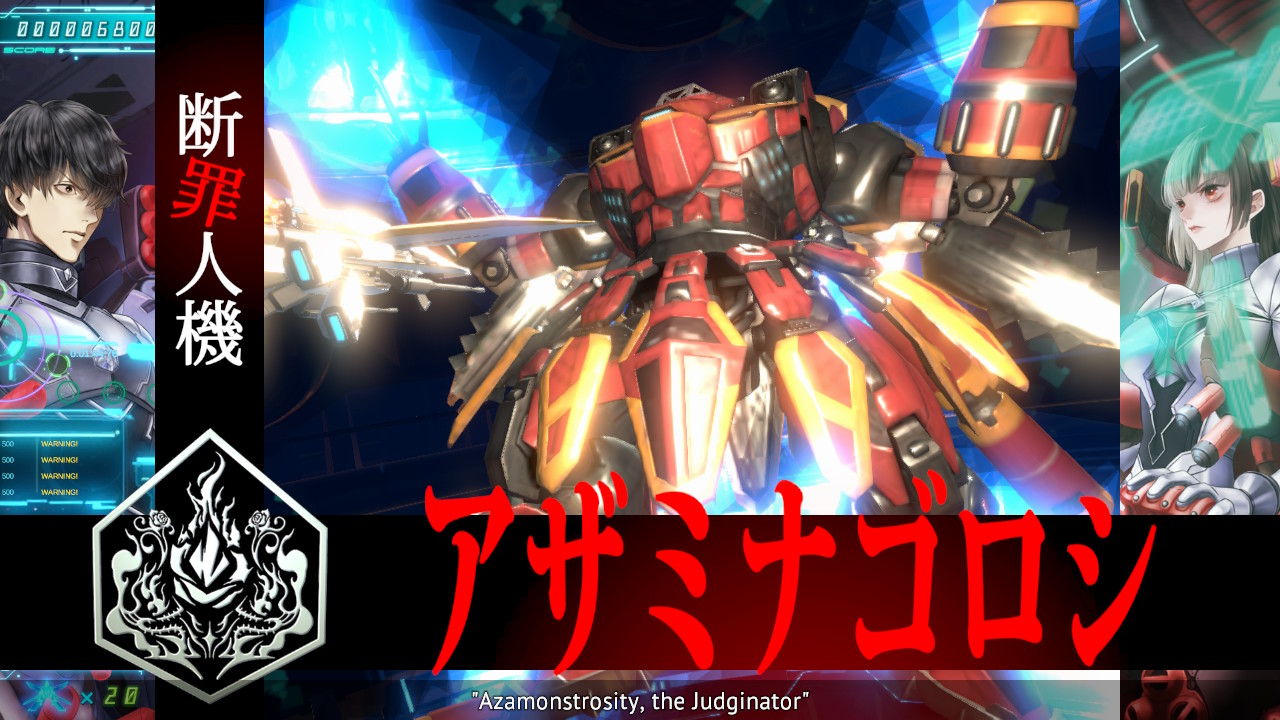 Yurukill is more successful as a shmup than as a puzzle game, but it’s the story that won me over; I really became invested in these characters and their relationships. The narrative goes places I didn’t expect it to, and I didn’t have the main mystery solved until right before the big reveal. The game does linger on certain elements for too long, and you’re occasionally asked to make deductions based on rather oblique clues. The pacing is solid, however, and with a completion time of around 15 hours (again, on Easy mode), it doesn’t wear out its welcome. If you played Yurukill for the story, you’re done. If you played it for the action, there are plenty of reasons to keep going, including the ability to tackle the levels at different difficulties and with different ships.

As for the other elements, the graphics and music are both fine. I recommend not playing the game in handheld mode simply because there’s an overload of intricate movement in the shmup levels. The game can slow down when the animations become too intense, but not enough to impact gameplay. I also experienced one crash after defeating a boss, and I had to start the combat level from scratch. Not fun.

Overall, I greatly enjoyed my time with Yurukill: The Calumniation Games. Hardcore fans of either bullet hell or puzzle games may be put off by the other half, but I was fine with the balance. More importantly, I loved the tone, I loved the characters, and I loved where the story took us. The premise and the conclusion beg for sequels. I’d love to see a different genre mashup with each, I just hope a certain few characters come along each time.

Yurukill: The Calumniation Games combines puzzle solving with bullet hell action to create a unique gaming experience. Its dark premise is handled with humor and an engrossing mystery that’ll push you quickly to a rewarding end, and various difficulty settings will make sure fans of both genres can get there.