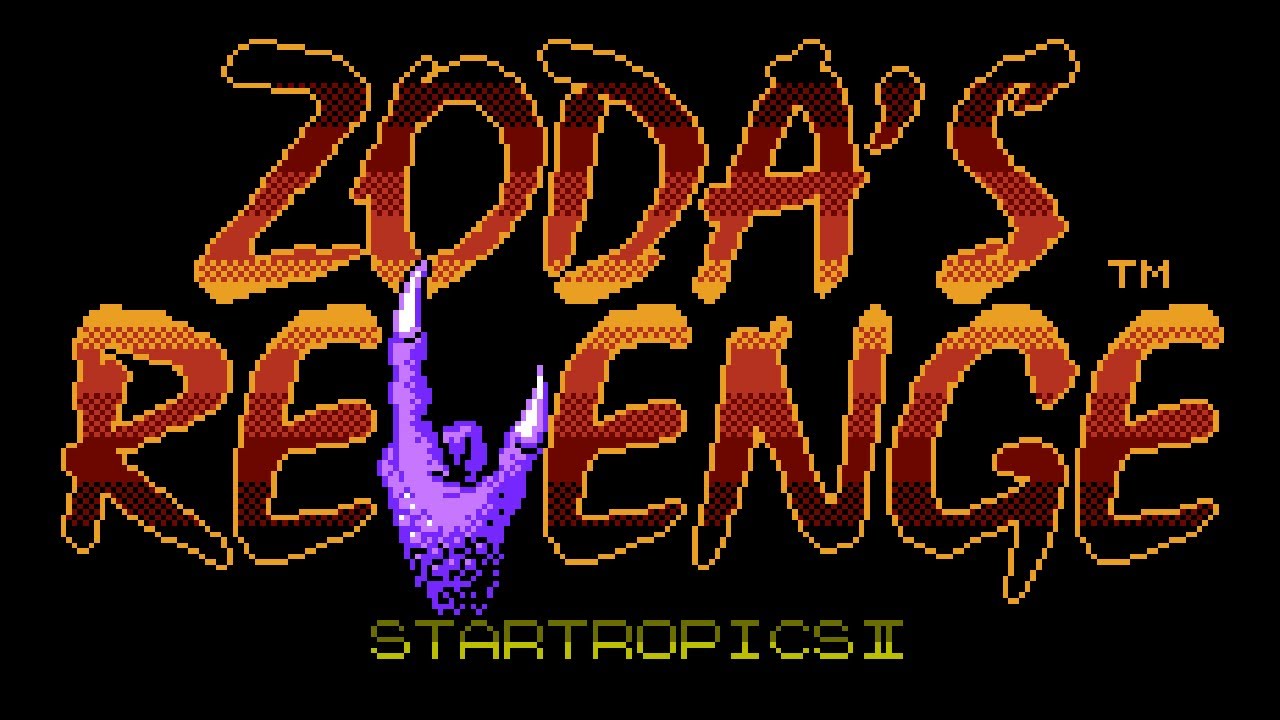 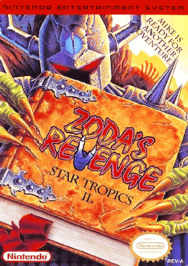 “You skip to another time and space”

For a review of the first Star Tropics, please read Tristan’s thoughts in issue #16 of PNM.  As far as continuity goes, this sequel picks up soon after the events of the original game.  In terms of release date though, there was a big gap of three plus years between titles.  Zoda’s Revenge was actually the last Nintendo published NES exclusive.  I’m glad it’s released on the WIi U Virtual Console, since it was largely overlooked back in the day.  While I admit I’ve never thought it was great as a sequel, I do feel it’s pretty good when taken on its own.  It has an interesting time travel plot, proven gameplay, and even a few small gains over its predecessor.

It takes time to grow on you however.  The first chapter is non-interactive, simply catching you up with Mike and Dr. Jones, while introducing the new plot.  The second chapter is littered with pits you can fall in, and a boss that’s either very easy or crazy hard depending on your approach.  Thankfully things improve as you advance.  Interacting with historical figures (both real and fictional) is fun, and there’s still a fair amount of humor.  My main regret is that there’s no sense of closure with many of the characters, as Mike simply jumps to a new time without even a chance to say goodbye.

The graphics are satisfactory, but unremarkable.  For a 1994 release you’d expect better.  Even when compared to the first these visuals suffer in some respects – weaker coloring for one.  They have their own advantages though, like smoother edges, and more detail at certain points.  And the time travel theme allows for more diverse locales.  This carries into the soundtrack also, which has a greater diversity of tracks, even if they aren’t as lively or catchy.  The sound effects are fine, save the ear-piercing one if your hearts get too reduced.

“Improved play control” is the big debate surrounding this game.  Camps seem equally split on whether they’re better or worse.  Being able to move eight directions is certainly good on paper, but the dungeon and enemy designs are still reflective of the original’s grid movement.  This means hit detection often seems suspect, and it just appears the dungeons weren’t sufficiently tweaked to reflect this updated design.  So you can go with somewhat stiff controls in the original, or quite loose controls in this sequel.

In other ways these dungeons manage to come out slightly ahead.  I didn’t notice (or miss) the return of any pitch black areas, false exits, or insta-fail screens.  New multi-level rooms allow for Mike to climb or fall from above, and new arrow tiles make way for some fresh battle and puzzle designs.  Medicine seems to be more abundant as well – certainly no bad thing given the game’s often cheap difficulty.

For me, Zoda’s Revenge is a case of one step forward, two steps back.  As a sequel it’s weaker overall, but that doesn’t mean it’s not a quality game in its own right.  I still find it enjoyable, and it’s move to the Wii U VC makes it far less frustrating thanks to restore points.  I suggest downloading both games, and playing them in order.  Let’s hope that good sales lead to the next long overdue entry in this fun and challenging series.

For me, Zoda’s Revenge is a case of one step forward, two steps back.  As a sequel it’s weaker overall, but that doesn’t mean it’s not a quality game in its own right.  I still find it enjoyable, and it’s move to the Wii U VC makes it far less frustrating thanks to restore points.