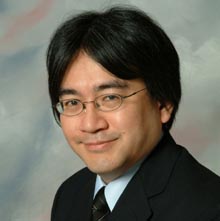 CEO of Nintendo Satoru Iwata was named to Barron’s Top 30 CEO’s in the world. Congrats to Mr. Iwata and to Nintendo.