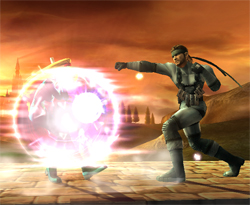 Once you know how to attack, the next thing you have to think about is avoiding enemy attacks. That’s where the shield button comes in handy.

You guard against your enemy’s attack with your shield!!

Shielding against attacks is a top priority. Because if you don’t get attacked, you can’t get done in! However, the more attacks your shield takes, the smaller it gets.

If your shield breaks, you lose consciousness.

But more important than guarding is dodging.

You just tap the Control Stick in a direction while holding the shield button.

Tap the control stick down to do a sidestep dodge!

Tap it backward to do a backward-roll dodge!

And tap forward to do a forward-roll dodge and get behind
your opponent!

If you can do these moves, your enemies will have a hard time landing their attacks. And they make you momentarily invincible, so using them proactively is OK.

Use these moves as much as you can even before you get used to them. Sometimes things become clearer that way.