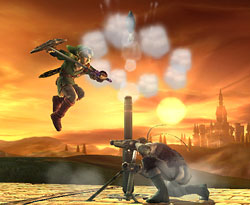 It’s not just Snake’s special moves that use ordnance—so do his Smash attacks. Can that be?

He’s shooting something up in the air!

This is called a Nikita. It’s a remote-controlled missile.

You can control the missile yourself! But since Snake is so focused on controlling the missile, he’s completely defenseless while he does so.

If things get dangerous, press the shield button to stop controlling the missile.

Try walking around with the pin out.

There are three ways to throw the grenade.
Tilt the Control Stick forward, not at all, or backward.

In some cases, grenades you drop may get returned to sender.

And his recovery special move is…

Use his flying reconnaissance camera, the Cypher, to recover. Snake can’t fly, but he’ll do what he must.

He’ll use anything in the battlefield. That’s the crux of survival.