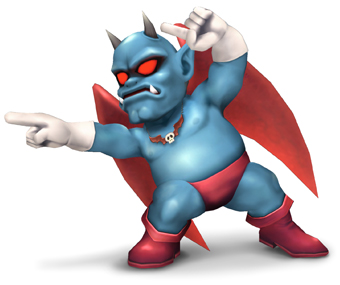 It’s the devil from the NES game, Devil World! This particular game was never released in the United States, actually.

Anyway, when this evil guy shows up, you know it’s time for… What does he do again?

Well, he certainly appears to be in good shape.

After he ascends with his bat wings, he’ll move to a determined spot on the screen. Then he’ll jab his fingers up over his head!

And now the screen scrolls!

In Smash Bros., going off the screen means you’re out of the ring, and breaking that rule is very problematic.

So what happens then? Extreme panic and new strategies.

Here’s an Assist Trophy that throws common sense out the window. I mean, he’s not assisting at all!