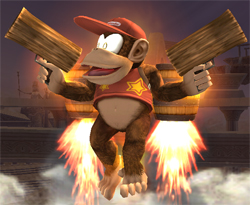 The weapons Diddy Kong wields are his Peanut Popgun and his Rocketbarrel Boost.

His Final Smash makes superb use of both of these weapons!

He has popguns in both hands! And his rocketbarrels are firing!

He flies majestically through the sky!

Wow! The controls make it feel like you’re flying with a rocket pack! It’s really fun. Tilt his body left and right to move.

The Peanut Popgun fires straight down, so you change the peanut firing angles by tilting Diddy left to right. I highly suggest mastering this.

When time runs out, the rocketbarrels explode!

Plus, you can gobble up the peanuts that fall to the ground.

Will you be enjoying some? No? Well, your opponents can eat the peanuts, too. So when your shots don’t hit, your opponents end up recovering damage instead of taking it.