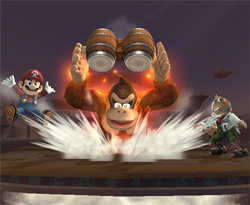 As you might expect from Donkey Kong, his Final Smash is something…upbeat. That’s right, he’s breaking out the DK Bongos!

It’s cool to just pound on them, but why not listen to the music that’s playing? Press buttons in time to the beat to really get things hopping.

Feel the rhythm and increase the power! T-t-take it easy, will ya!

DK’s invulnerable while in the middle of this move, so take it easy and enjoy the moment.

Oh, and jamming during screen scrolls and such is something you might want to…think about.