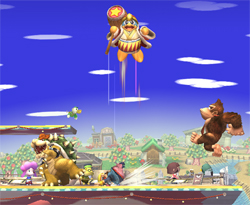 And he lands HARD!

King Dedede’s great jump is his specialty! But he doesn’t have much freedom while jumping, and his vulnerability when he lands is pretty significant.

That said, if things look bad, just tap down on the Control Stick.

You can flip over and cancel it in midair.

However, if you try to cancel just before landing, you’ll make a fool of yourself, and you’ll be vulnerable for even longer, so watch out.

Just toss them out there.

He pulls out Waddle Dees from who knows where and throws them. The Waddle Dees then waddle around afterward.

This time, King Dedede’s hammer is actually mechanized. The head’s rotation is powered by a motor.

And it can do this.

If you hold down the Control Stick and the special-move button simultaneously, you can charge up his hammer. And you can unleash it in one blow!

The power of the jet multiplies the destructive force!

You can even walk around with it charged up, but you can’t save the charge by pressing the shield button. Also, if you charge it up too much, it will increase your own damage, so be careful.ma