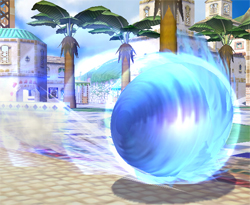 The original Sonic the Hedgehog game used only one button. I think its simple yet exhilarating play was its virtue.

And given that this game’s controls are also simple, I think it personifies his distinct characteristics.

Yeah, you have to have this.

Hop into a supersonic Spin Dash. If you charge it up just a bit, your speed will increase.

It’s also possible to rise up while spinning.

Then keep pursuing with a midair attack!

And do a Spin Dash in midair to return.

By holding the Control Stick down and tapping the special-move button, you charge up your spin and do a Spin Dash. This may feel better for some—there’s no pop.

And his up special move is the Spring Jump. That spring launches you wayyy up in the air.

You might not use it on the ground much, but rumor has it that if you do, the spring that remains can be used by other characters.