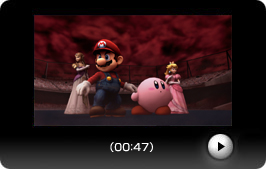 “The Subspace Emissary” storyline introduces a force of formless enemies called the Subspace Army. They are ruled by their commander, the Ancient Minister.

The enemy’s primary offensive strength is in creatures called the Primid. They come in many variations.

Their objective is to cut apart the world and carry it into Subspace. They use what are called Subspace bombs to do so.

The Robotic Operating Buddies (R.O.B.s) on either side of the Subspace bomb are needed to detonate the device.

When a Subspace bomb explodes, a section of the world gets excised and swallowed by Subspace.

Kaboom! The stadium is engulfed!

This is a new, never-before-seen form of aggression…but now is no time to stop and stare. Everyone, everywhere, is beginning to move against it.