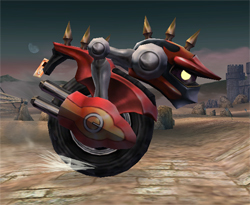 The enemies in Super Smash Bros. Brawl: The Subspace Emissary are called the Subspace Army!

Right now, I’d like to introduce some of the more powerful ones.

This enemy looks like a motorized unicycle. These guys ride around in groups, and are both fast and powerful.

Their bucket trousers are filled with presents and candy. If you approach these cowards, they’ll flee.

Leave these enemies be and they’ll multiply in a flash. Destroy them before they get to be too much trouble!

This creature will use its trowel-like arms to lift characters up and fly off with them.

This unpleasant, fog-like enemy has a weak spot at the core of its chest!

This bird dives from above, piercing the ground. You can pull out any Auroros that sticks itself into the ground.

It’s HUGE! It attacks by swinging two sickles down upon you. Its red head is its weak spot.

The escort the Ancient Minister brings with him is a R.O.B squad?! There are some that fire beams and others that fire missiles.

There are other enemies that will appear and try to impede your progress. Good luck! Don’t lose! And don’t run away!