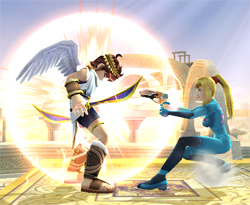 Bzzzzzzzzzzt! I can’t get enough of this.

A personal protection device, the paralyzer stuns opponents. If you can charge it up for a bit, you can land additional attacks while your opponent is stunned.

A down smash will fire it at your feet!

But this is only self-defense at best. It does not have the power of an explosive attack. Where and when you use this is key.

What really brings out some characteristic Samus skills is when this gun transforms and releases a whip: the Plasma Whip.

The flash at the tip of this short whip is quite powerful!

Shoot it straight up to pull enemies toward you!

These two moves can be used to grab and hang from an edge. They can reach even if the ledge is pretty far away, so pay close attention to distance and timing and aim to dangle from the edge.

Pzzzzt! What a magnificent edge grab!