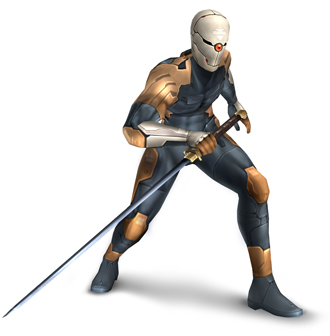 If Snake is going to be joining the brawl, then it should be fine to have someone else from the Metal Gear world join as an Assist Trophy, right?

He approaches stealthily with lithe jumps, coming right in then slicing repeatedly. Awww! It makes you want to use him as a playable character.

He slices over and over with his back-handed grip.

By the way, he reflects projectiles.

Gray Fox faces off with Snake.

Gray Fox, who engaged in a grand battle to the death with Metal Gear REX… To think that he would reappear on Wii, and alongside Mario and Sonic at that!

You never know what might happen in this world.