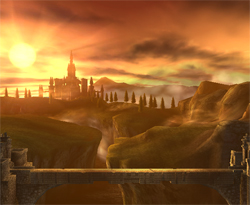 This area appeared in the Wii game The Legend of Zelda: Twilight Princess. If you’ve played that title, you ought to remember this place.

The terrain is flat. I mean, really flat.

And the enemy leader, King Bulblin, makes cameo appearances. Occasionally, he uses bombs to blast holes in the stage.

But don’t worry. The missing chunk will be magically transported via portal to fill in the gap.