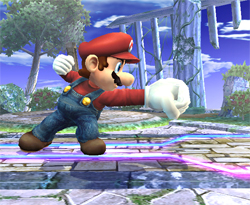 There’s a variety of attacks in Smash Bros., and they all involve some combination of strength and direction. Let me start here by talking about strength.

If you just press the attack button, you’ll perform a standard attack. These are generally speedy.

When you tilt the stick in a direction, you’ll do a stronger attack in that direction. These attacks usually have longer reach.

Now, if you simultaneously tilt the stick and press the button, you’ll do a smash attack. These are powerful!

Since the name for smash attack is derived from the game’s name, you can assume they’re pretty important.

Swiftly tilt the Control Stick left, right, up, or down, and simultaneously attack! When you link the feeling of this control with the result of sending an opponent flying, I think you’ll start to see the crux of this game.

At first, don’t overthink things. It’s OK to just tilt the stick and mash some buttons. Ease yourself into it.

By pressing and holding the attack button during a smash attack, you can build up power. Power up and unleash it when the time is right!