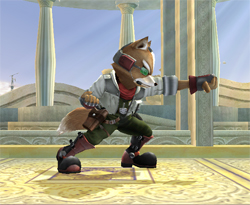 Up until now, standard combos, or button-press combos, were done primarily by tapping the attack button repeatedly.

That won’t change in Brawl, but now you can also just hold down the attack button to automatically do consecutive standard attacks.

It will vary a bit by character, of course, but in the case of Fox…

Press and hold the attack button to do consecutive jabs.

Press the button repeatedly, or just start hitting your enemy to initiate the combo.

The game will be compatible with a variety of controllers, so I’ve gone a tad easier on the button pressing.

Of course, each character will have variations. While some may do repeated rapid jabs, others may simply do three slow swipes with a blade.

Meta Knight is somewhat unique. His standard attack is an unbelievably rapid sequence of slices. Just press and hold the button to unleash a rampage.

This guy needs to calm down.