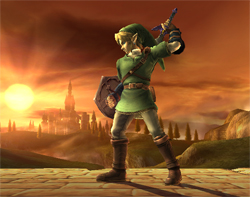 If you want to show your opponent a little flair, you can do moves unrelated to battle—it’s called taunting. You do it with the +Control Pad, except when using the Wii Remote and Nunchuk.

This time, you do one of three different taunts, depending on the direction you press the +Control Pad!

Up taunt: He twirls his sword twice and sheaths it.

Side taunt: Oh. A fairy.

Down taunt: Is this his mysterious pose from the Nintendo 64 version?!

There are a variety of patterns for you to enjoy.

He takes off his hat and spins around whimsically.

She curls herself in some sort of new stretch.

He gives a shout on the spot.

He gives a three-fingered “W” salute.

He thrusts his sword in the ground and crosses his arms.

He spins his feet and says “Too slow…”

With Wii Remote + Nunchuk control, taunts are handled with the 1 Button (up taunt), the 2 Button (down taunt) and the 1 and 2 Buttons simultaneously (side taunt).

Oh, and a short message can be assigned to each taunt direction.