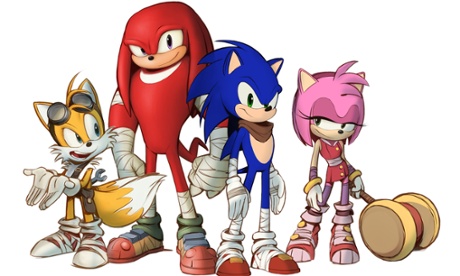 Yesterday it was revealed that Sega will be releasing an exclusive game for the Wii U and 3DS called Sonic Boom, which will tie in with a new Cartoon Network CG animated series of the same name.

It was exciting news, judging by the online buzz surrounding the announcement, and now Big Red Button’s creative director Bob Rafei has some more details to answer the burning questions that have been circling the interwebs.

The title represents a new approach for Sega’s spiky blue mascot, and Rafei stresses that although Sonic Boom looks different, it actually draws inspiration from some of Sonic’s most popular titles:

Sonic 2 had a ‘team’ vibe between Sonic and Tails and we wanted to recapture that plus kick things up a notch by adding Amy and Knuckles to the equation. In Sonic Adventure, the game’s structure offered exploration and discovery that opened up more as the player progressed. We believe this is a great approach and modelled Sonic Boom after it. We also love what Sonic Team did with Sonic Generations, giving the player 2D and 3D variations of the same level. Our take was to integrate 2D and 3D seamlessly within the level in a way that made sense, keeping things fresh for the player.

Rafei  also spoke about those new character designs (Knuckles, we’re looking at you). Here’s what he had to say:

The objective was to make the characters instantly recognisable as being from Sonic Boom. We explored various costume options and quickly found the limits of what works and what doesn’t. Since we wanted to push the characterisation of Sonic and friends to fit our narrative, I thought it more appropriate to make them a touch older by adjusting their head, hand and feet proportions. The athletic tape hints at a team that is ready for any action – it is about practicality rather than vanity. Given they have very clean graphic lines, it was important not to clutter their silhouettes, so any little addition had to be carefully considered. They are designed for an epic action adventure.

Finally, Rafei has some encouraging news for the Wii U version, as the studio is striving to better utilise the unique features of the GamePad:

The GamePad display has given us a great solution for local co-op play. We tried different solutions for our co-op camera, including single split-screen display, but ultimately this wasn’t able to service our game vision. The GamePad also has a look-around mode where the player can scan the environment looking for clues and hints to secrets in the game. As for 3DS, there are some crossover plans between it and the Wii U involving special unlocks for Sonic fans who have both versions.

This definitely sheds some light on the direction of the new series, yet it’s still too early to tell if it’s a step in the right direction, with many fans still feeling unsure after the inconsistency of previous Sonic outings. Let us now your thoughts on this brave new Sonic world in the comments below.