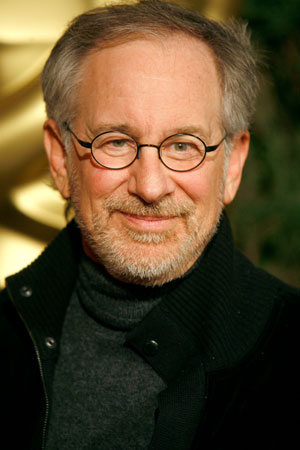 Spielberg Talks Boom Box and Gaming In His House

Is Boom Blox something that still gets played at the Spielberg household?

We do. They play it a lot when they’re not doing the other Wii game where they’re exercising. We have a lot of Wii Fit at home right now.

What other kinds of games do you like to play with your kids?

We have the 360 and a PS3, but my younger kids are devotees of the Wii. We have a Wii version of Guitar Hero. We all enjoy playing that as a family, which we do more than I really want to admit. We play Rock Band. That’s what we’ve been playing for the last year.

When you play Rock Band, what role do you assume?

One thing I can do is hit a drum. So that’s what I do.

Do you play games on your own?

I play a lot of action games. I go into the store and find a game that looks compelling, or I get one that one of the folks at EA suggests I try, and I take it home and I play it. There have been a lot of games, including all the sequels for Medal of Honor, that I’ve really admired. I love the direction it’s taken. I also like the competitive games. I’m currently playing Call of Duty 4. A lot of these first person shooters are very interesting.

You know the thing that doesn’t work for me in these games are the little movies where they attempt to tell a story in between the playable levels. That’s where there hasn’t been a synergy between storytelling and gaming. They go to a lot of trouble to do these [motion-capture] movies that explain the characters. And then the second the game is returned to you and it’s under your control, you forget everything the interstitials are trying to impact you with, and you just go back to shooting things. And that has not found its way into a universal narrative. And I think more has to be done in that arena.

Some games avoid those cutscenes altogether. Are you familiar with Half-Life?