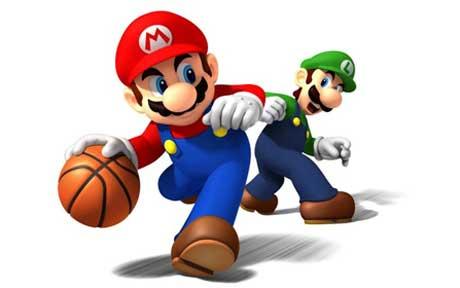 REDMOND, Wash., Feb. 7, 2011 – With Mario™ and his Mushroom Kingdom pals on your side, why take up just one sport when you can play four? Launching today exclusively for the Wii™ system, theMARIO™ SPORTS MIX game invites players to enjoy the outrageous, fast-paced fun of four different sports – volleyball, basketball, hockey and dodgeball – each packed with imaginative twists and challenges. All four sports are available on a single game disc at a suggested retail price of $49.99, offering inclusive, irresistible game play at an unbeatable value. Best of all, players can share the spotlight with Mario and his friends by playing each sport as their own customized Mii™ characters.

MARIO SPORTS MIX enhances the basic elements of all four included sports with a flurry of eye-catching power-ups, obstacles and unexpected twists. Players might fling banana peels and green shells to thwart an opponent, or an entire court might move from side to side under players’ feet. Each character also has a powerful special move, such as Mario’s ability to swirl in the air and dunk a basketball from anywhere on the court. Throughout the game, players can also boost their scores by collecting coins to earn bonuses. Whichever sport they choose, newcomers and experienced players alike can count on a memorable mix of athletics and imagination.

“With Mario Sports Mix, players get four full sports games packed onto one disc, which is a great value,” said Marc Franklin, Nintendo of America’s director of Public Relations. “In addition, the ability to jump into games as your own Mii character and play with Mario and other Mushroom Kingdom characters makes Mario Sports Mix a unique sports experience that can’t be found anywhere else.”

MARIO SPORTS MIX offers multiplayer options that allow friends and family to hit the court together. Up to four players can play together in the same room using additional Wii Remote™ controllers (sold separately). Up to four players with broadband Internet access can also connect online via Nintendo® Wi-Fi Connection and play cooperatively or competitively in two-on-two or three-on-three matches.

To help commemorate the game’s launch, Mario himself will conduct a press conference on Feb. 7 to answer some of the most pressing questions of his illustrious career in sports. The conference will begin at 5 p.m. Pacific time and can be viewed by fans and media alike via the Web at http://mariosportsmix.com.

Remember that Wii features parental controls that let adults manage the content their children can access. For more information about this and other features, visit http://wii.com.